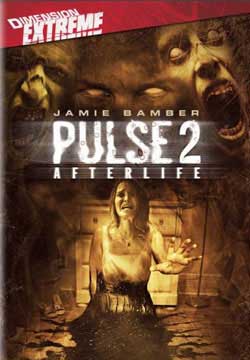 In 2006’s Pulse, technology unwittingly opened the door to the afterlife. This chilling sequel explores the aftermath of that encounter, as civilization struggles against spirits locked in an eternal battle for their own souls. With cell phones, the Internet and other devices outlawed, humanity must find a new way to live in an apocalyptic world ruled by tormented ghosts. Jamie Bamber, Boti Bliss and Noureen DeWulf star.

For those of you who saw Pulse, Dimension Extreme has presented us with Pulse 2. The production value seems pretty solid and it has its fair share of creepy moments. Myself always being a sucker for ghost films, Pulse2 has no shortage of flickering, blurring, semi-transparent blue toned apparitions walking around to please most supernatural fans.

Apparently in Pulse2, we are set in some future time shortly after the first Pulse phenomena began to overtake the world. From what I can make out, the supernatural and reality have fused a bit in where alot of dead folks are coming back or walking around. Mostly repeating those last few moments before there deaths. So the living have to play a bit of dodge and swerve to not mix in with the flicker folks. Also if you didn’t pick it up in the first 5 minutes. The undead don’t like the color red much. Red is there cryptonite or holy water…however you want to call it. but place a few strips of red tape on your doors and your good to go.

Now the strange thing is, is that the dead have some sort of “death” power so it seems. I guess they can touch you and make you infest with death fungus and you die too. Also it looks like you can have sex with the dead but it may turn them into death goo. Which is sort of an odd perk I guess.

Some of the dead think they are still living which is a real bummer, since they are not. Now if that doesn’t bring you up to speed then go watch Speed racer.

The focus of the film centers around the tale of a recently divorced couple and the ex wife’s coming to terms with it. Still holding on to the family dream she once had, she goes into depression and takes her life. Though she doesn’t realize it right away.

Ok, Pulse 2 wasn’t a bad film. The FX were pretty solid and the creepiness, while not that scary still had its fair share of moments. My fav being the apparition that reverses in herself and the creepy elongated arm dude. My opinion is that it will be a hit or miss with alot of folks. What I mean by that is some call it trash and others will say it was pretty decent. I’m going to go with I liked it enough to watch it again some time, how’s that? I thought it lost its momentum and sort of fizzled out into itself and basically left alot of holes in between. I would have preferred an exciting war of the unliving kind of ending rather than where it went.

Though I had to snicker a few times, as too many folks seemed to have alot of that red tape on hand. I don’t know about you, but I would have to shop around to even find a roll let alone to cover all my windows. I mean wouldn’t maybe some red spray paint do just as good? OK, I know… You have have to suspend disbelief and go with the flow.

The Pulse legacy is one I like. So it wouldn’t hurt my feelings if a Pulse 3 followed. I still believe that Pulse 2 needs a proper viewing of Pulse 1 to get the gist. But hey, I liked Pulse 1 so no harm there. Pulse 2 – I wouldn’t run to the stores but it might fill a few visual needs. Kudos also on a cool DVD cover!