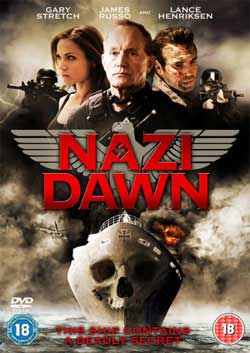 When a WWII-era transport ship, reactivated and deployed in the Persian Gulf for black-op interrogations, falls radio silent, an elite Marine task force, along with an NCIS investigator and two scientists, are sent to apprehend the terrorists… Only to find a more devious enemy

A World War II transport ship is reactivated (What? Why??!) and deployed to the Persian Gulf for super-secret, under-the-radar terrorist interrogations. But then in the midst of torturing a suspect, things go terribly wrong. Enter supremo badass NCIS investigator Jethro Gibbs (just kidding, it’s Lance Henriksen), two scientists, and a group of elite, gung-ho Marines to find out just why in the hell the ship fell radio silent, what in the hell happened to the crew of elite soldiers that was already there, and what in the hell is killing everything on board the ship in the first place.

If only they had asked why in the hell an elite fighting force like the United States Navy would send a crew to the Middle East during the war on terror in a 60-year old ship without even a goddamn screwdriver to fix something should it break down instead of a state-of-the-art battleship with everything remotely possible that they could possibly need already stocked on board, I’d still have that hour and a half of my life leftover to burn somewhere else…

I really, really loved watching DEATH SHIP (1980) when I was a teen back in the 80s. I rented it probably once a month at least. I should have just bought the damn thing on VHS, but back then I guess I just thought it would be around forever, or my local video store would get tired of me spending my hard-earned money in there on it all the time and just sell it, or even better, GIVE it to me. But alas, they didn’t.

And wouldn’t you know it, I went back to get it one night for my monthly viewing only to be told that some assclown who didn’t know how to properly clean the tape heads in his VCR had rented it, popped it in his player, and the player promptly ate the tape, ruining it forever. And of course, that was the only copy the store had and they had no intentions of replacing it anytime soon…or ever, as I would soon find to be the case.

I haven’t watched that flick since those days – the last time being probably round 1987 or so – and I doubt it’s even available on DVD yet (which is a CRIME, I tell ya…still waiting impatiently for a Special Edition of THE BOOGENS too, but that’s a gripe for another time). Why would I go on so much about a flick from 30 years ago when I should be talking about the one I’m supposed to be reviewing, you may or may not ask? Easy – for its age, DEATH SHIP is everything that NAZI DAWN isn’t, even though there is a similar storyline there. For those of you out there who haven’t seen it yet, seek it out – you can thank me later. Or sooner rather than later if you feel like thanking me with bottles of Glenlivet…

Anyhoo, internet rumor has it that the producers of NAZI DAWN (or as it also seems to be known – DARK WATER and/or BLACK OPS) wound up with the opportunity to shoot a movie on an old battleship…very cool, right? Sure, why not? But then instead of taking their time (or at least more than a drunken weekend) putting together a script, it almost seems to me that they asked one of their horror-savvy friends what kind of fast and cheap storyline they could use for a quick shoot on board an old ship, and since DEATH SHIP hasn’t been remade (yet), the rest is history. Sort of…

Lance Henriksen is actually more of a badass here and seems to be having more fun than I’ve seen him have in quite some time in a movie (probably since ABOMINABLE), and that’s very, very awesome. Sadly though, even his kickass performance wasn’t enough to hold my attention enough to make me recommend this. Plus, James Russo was sadly underused, which only added to my frustration. The action started out fast and furious, but once the new team landed on the boat, horrible dialogue, even worse lighting, and painful dialogue (did I mention that?) took over, leading to boredom and many, many, confusing plot holes and attempts at twists. And that ending…really?? Seriously, what the hell?? If anyone out there knows what they were going for there, please share with me – I’m kinda curious. As far as haunted under-or-on-top-of water flicks go, you’re much better off watching the vastly entertaining yet highly underrated BELOW. Hell, come to think of it, I’ll even take GHOST SHIP over this one…