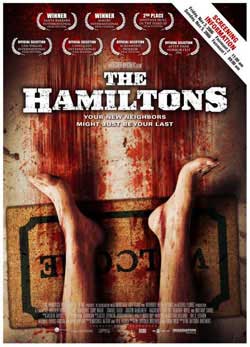 Four young adult siblings try to fend for themselves after the mysterious death of their parents. But they harbor some dark secrets which include abducting and killing strangers…

Directed by The Butcher Brothers, “The Hamiltons” at first glance reminded me a lot of “An American Family”. Remember that one kiddies? It was basically the first reality show & featured the daily going on’s of the Loud family. It pretty much ruined their lives as well. But, BINGO!…a new genre was born. And it thrives to this day. But “The Hamiltons” doesn’t really stick with the whole “Reality” vibe for long. I felt that way because one of the family of four has a penchant for recording the daily lives of his brothers & sister. Usually to their chagrin. But I’m getting ahead of myself…

At the outset of the film we learn that Mom & Dad are dead, leaving the four children to fend for themselves. There are four brothers (Francis, David, Wendell & the mysterious Lenny, who we don’t see till the end.) & one sister, Darlene. David has assumed the job of running the household but isn’t really that good a job of it as they have moved six times in two years. Oh! Did I mention they have a penchant for kidnapping young women & keeping them captive in their basement? I should’ve. Francis is the one who likes to tote around the camcorder to chronicle the lives of his siblings but he is clearly troubled by the situation at hand & is “Trying to find his place in the world”. David & Wendell do what they can to make their lives seem as normal as possible for all visitors, such as the occasional social worker that comes by to check in on them. Sister Darlene, is something of a wack job & is clearly unhinged from the moment you see her. As to their mysterious brother Lenny, they keep him locked in the basement. We hear his screams but they aren’t screams of fear or pain. They’re angry screams. Screams of someone…or something that wants to be set free for no good reason. At one point during the butchering of a captive, Wendell & David mention that “He’s beginning to change”. Into what? We find out at the end of course & you won’t find out by reading this review either (No spoilers).

Poor Francis is picked on by his sister incessantly & is threatened with death by his older brothers if he lets on what the family has to do to “Survive”. What they do is obviously something that they did while they’re parents did as well & all of them, save Francis, are pretty adept at it. Older brother David also seems to have a bit of repressed homosexual tendencies running through his brain as well (something Francis records for posterity without David knowing). Francis is extremely sympathetic to the captives torture but he really can’t do much about their situation for fear of being turned on by his siblings. He’s sort of an “Emo” type who knows what’s happening is wrong but it’s the only life he knows. He videotapes the captives downstairs as well & watches the tape when he’s alone in his room. Dangerous evidence to have laying around but it’s how he lives…

There is a great extended scene where Darlene has a friend over named Kitty to watch some movies & hang around for a bit. Kitty finds a stack of ID’s from some of their victims but Darlene manages to pass them off as fakes. This leads to Darlene, Kitty & Wendell watching scary movies & a game of “Truth Or Dare” that comes to no good end for Kitty eventually. So we have misunderstood Francis, sadistic Darlene & Wendell, repressed homosexual David & yet to be seen (but heard) Lenny in the basement. The all american Nuclear family who just happen to capture women & do something to them. We’re just not too sure what that is as of yet but it does involve bloodletting. Francis is caught by Wendell at one point talking to one of the captives & a fight ensues between the two of them but Francis is easily overpowered & his hand is thrust into a small window on Lenny’s door. Francis screams in terror as Lenny gets a hold of it & he retracts it covered in blood. What the f*ck is Lenny exactly & why are they all so afraid of him?

The first thing I noticed about the film is that although a lot of bloodletting is implied very little of it is seen. This is a good thing actually. The film is very low key & slow moving. Not in a bad way mind you, but in a deliberate way. You see the movie through the eyes of Francis & he is in no rush to tell his story. At one point he claims that “I wish they would catch us and then it would all be over”. He thinks this particularly damning thought as he watches Wendell & Darlene plot Kitty’s capture on video. But that’s all we get of that scene. Information comes to us in dribs & drabs throughout the movie. At one point, Francis tells one of the captives that the family is “Sick, we have a disease”. What disease is this? We only get small clues but enough for us to form a hypothesis of what it is anyway. The fact that we’re probably wrong about what the disease is in the end is refreshing actually. I mean, I have an idea but it doesn’t quite jibe with the lore attached to it so I’m guessing I’m wrong. One very telling clue is that they keep little to no food in their home….anywhere. Except maybe in the basement where they keep their “Guests”. Maybe.

The film slowly continues to it’s finale where the family finds it has to escape again. And to do that, they have to release Lenny. Now I gotta be honest with you (The Black Saint would never lie to his beloved acolytes), I figured out what Lenny actually was about halfway through the movie & I wasn’t surprised in the least when he was revealed, although some of you might be. Before they make their escape there is a confrontation between David & Wendell/Marie where we find out that Wendell & Marie have a semi incestuous relationship going on & David has been burying his lovers underneath the house. David fairly seethes with anger as he realizes that the family has to move again. He explodes in rage at them but they are unswayed & unafraid of him as they slowly saunter off arm in arm to pack their necessities. Meanwhile Francis manages to save the lone survivor still being held in captivity in the basement. He carries her off to safety. But he calls he social worker first so that he can find the truth of what’s going on in the home. Too bad for him he runs into Lenny though..

Darlene & Wendell arrive to find the resulting carnage & find that Francis is gone & so is their last captive. They have to find him because “He’s on the verge”. Of what you ask? As we find Francis & the young lady laying low he starts cramping up and says “We’re born..not made” before he attacks her. Here is where we find out what the Hamilton family actually is. But as I said earlier, it doesn’t follow within the normal tropes of this kind of “Disease” which is what will throw you off for awhile.

Francis asks at the beginning & the end of the film “What does it mean to be happy?” He has no real answers, in fact the film doesn’t give us one either. What we do get is an absorbing example of a family with a “Different” lifestyle to say the least. Francis even acquiesces in the end & accepts his fate. The “Change” that is spoken of is equated with the onset of puberty in a sense although Lenny is far too young for that yet. “The Hamiltons” isn’t a particularly scary film nor an exceedingly bloody one either. What it is is more of a character study of a family that will do what it needs to do to survive. No matter what the cost. It’s the story of a VERY dysfunctional family who have accepted their fate & learned to live with it. The scares & gore are minimal but the subject matter is intrinsically fascinating & you can’t help but watch. The Butcher Brothers (Actually Producers/Writers Mitchell Altieri & Phil Flores) have constructed a flawed but ultimately satisfying film that while slow keeps you wanting to know more about their protagonists & why they do what they do. You may not be satisfied with the answers but you will have a creepy good time getting them.

Overall, The Black Saint gives “The Hamiltons” 3 shrouds. A small film that isn’t looking to hit you over the head with shocks & gore. It’s more of a domestic drama that wants to give you a small case of the heebie jeebies. And in my opinion, it succeeds in it’s own low key way. Worth a watch.

And with that, it is time for me to bid all of you a not so fond farewell. As always, remember to brush your teeth before going to bed, Be sure all of your chores are done & most importantly….say your prayers. I am always listening for your prayers….to me. Don’t forget, I might be listening from underneath your bed. And you most definitely don’t want me there if you’re not saying your prayers. Trust me on that one acolytes…. 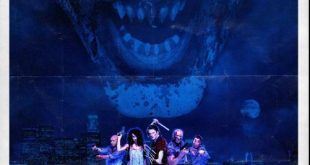 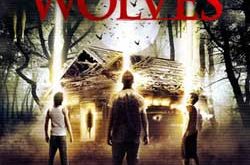