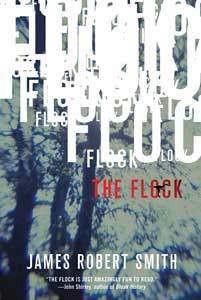 The Flock by James Robert Smith

“A remote Florida pine forest has been targeted for theme-park development by the Berg Brothers Studio who would like to make the area into “the perfect American township.” Unfortunately for them, some of the forest’s inhabitants are none too happy. It doesn’t help that those residents are a colony of ten-foot-tall Titanis walleri—intelligent, prehistoric, bird-like carnivorous dinosaurs. This flock of beasts, having escaped the mass extinction that killed off the rest of the dinosaurs has survived undiscovered ever since in the wild outside
the developed world, relying on stealth, cunning, and killer instinct.

When the Studio realizes that the flock’s discovery by authorities would put an end to their theme park, they hire a crazed survivalist and his army of mercenaries to eliminate the threat. Opposing the developers’ bloodthirsty exterminators is a billionaire rogue environmentalist who steps in to protect these rare, ancient predators for his own purposes. Caught between the flock and the two opposing forces of human combatants is a naïve young Fish and Wildlife Service officer who must try to prevent the destruction of the flock. But he may find out the hard way that man is the most dangerous predator of them all . . .

An exhilarating thriller filled with nail-biting suspense, THE FLOCK is a gripping, pulse-pounding tale that will keep readers on the edge of their seats to the last exciting page.”

In the tradition of the late great Micheal Crichton, James Robert Smith brings us a simply stunning debut novel that is grand in scope and detail, with plenty of thrills and terror, but most importantly, an absolute blast to read.

This is storytelling at its finest, with believable characters, insane plot twits and giant flesh eating prehistoric birds…how can you go wrong with that combination?

From the opening page to the very end “The Flock” delivers. It’s pacing is frenetic and the descriptive prose places you in the middle of the Florida wilds with “The Flock”.

I especially loved how Mr. Smith also  presented the viewpoint of the story from “The Flock’s” point of view. You grew to understand their way of life and how and why they survived as long as they did.

All in all, one of my favorite books so far this year and a must read for book lovers of any genre and I highly recommend it.