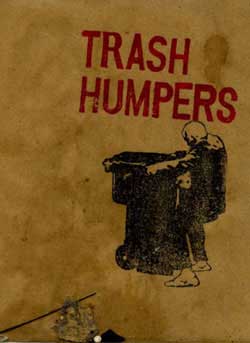 Follows the lives of a small group of sociopathic elderly people in Nashville, Tennessee

I would be hard pressed to say I saw an amazing film last night though I will say that I saw a extremely bizarre film. One that really defies logic. The movie “Trash Jumpers” probably needs more introduction before being watched than a random viewing like how I experienced it. This film which feels like a group of 4 or 5 individuals picked up some old cameras, edited them on VHS equipment and proceeded to indulge in off the cuff weirdness was actually planned that way. I was surprised when I started digging and found it to be a 2009 film directed by Harmony Korine with the intention of this type of illusion as part of its makeup. The movie is a series of VHS clips that could easily serve one as a odd viral campaign used to lure viewers into You Tube for the benefit of repeated viewings and a underlying hit count commission. Though it’s intention seems to be random shock value and a loss of inhibitions for the home viewers. This film as its presented has a small team who are strangely masked in old people latex that randomly hump trash bins, smash baby dolls, dance about in odd manners and seemingly manage to exist in a world of there own while our world passes them by. I was instantly reminded or that grandfather from Texas Chainsaw mixed with a less entertaining form of Jack-ass.

What is important here is that as random and childish as the characters and acts performed seem, the intention was actually a character driven piece that the director filmed over the curse of a couple weeks. If any kudos should be given, it’s in its pureness as a strange intention and parody on the typical American family gone “Mars”. The element of trash humping would have easily worn out if entirely focused on it as a narrative but it’s the random speech patterns, laughing and curious camera shots that continue to pull you from one scene to the next. I did find that as the film progressed, it began to take form from its juvenile weirdness into a prop driven character narrative. Props were filmed in the way of stage events, choices of clothing, and general items that the cast was required to interact with.

Even in the repetitive dialog ramblings, you begin to sense that the group understands that which is within their zany little world. What will make viewers unconformable is the uninhibited way that they carry out there day. Sometimes the events are played out almost more in a tribal fashion than a nonconforming fashion. Though I imagine if they were to suddenly don a set of Disney character suits, the perception would make more sense.

The intended notion begins with an almost horror driven weirdness by its assumptive relationship but is carried out in comedic tonality that makes fun of itself as much as the characters are fun to watch.

When we start reading about a deeper film to viewer relationship on this one, to be honest it just isn’t going to sit the same way with the mass of non film school analytic viewers in our society. I suppose the experience could serve as a great college round table coffee talk session but as a viewer we only see it for what it is and not for what it should be.

Trash Humpers is certainly not for everyone for the reasons of it’s just too weird even by a David Lynch standards. Even with scenes carrying themselves to the next, the joke begins to wear off about halfway thru.Though it is engaging and that’s what will work in its favor. You might even manage to entertain a room by throwing this on  and watching the viewers response. I really can’t recommend this film without a proper introduction and perhaps a quick overview of the intention of the filmmakers. At current the film has been banned from Netflix for its extremely trashy presentation which might end up working to it’s advantage. The film has also been playing throughout film festivals to an “expected” batch of mixed reviews. While its too young to be cult film it certainly fits within the oddity of the category pretty comfortably. You be the judge if you get the chance. Don’t expect much besides the unexpected.