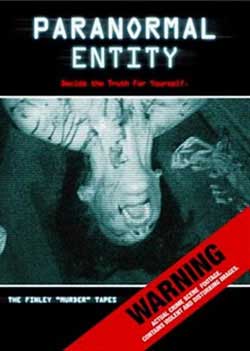 SYNOPSIS:After the death of her husband in an auto accident Ellen begins to communicate with what she thinks is his spirit (by writing him a letter-who knew you could talk to the dead like this?). Unfortunately it turns out that the spirit is not her late husband’s (and not very nice), and it goes on to terrorize her and her and her family (focusing mainly on her hot daughter, Samantha). After several terrifying incidents her son decides to document everything that is going on with a video camera. Will the family be able to get rid of the evil spirit that is tormenting them or are they stuck with it forever?

If imitation is the sincerest form of flattery then the people behind “Paranormal Entity” must really, really like “Paranormal Activity.” The similarities between the two films are obvious and one may even go as far as to say that this film is a blatant rip off. Since I never bought into the hype of “Paranormal Activity” I was too upset by the fact someone made a film that imitated it. I knew it was only a matter of time before it happened, so who better to do it than our pals at The Asylum (who did such movies as “Snakes on a Train,” “The Transmorphers,” and too many others to name here)? I personally like most of The Asylum’s movies (though they take a lot of sh*t from most people), and while “Paranormal Entity” isn’t the greatest movie I’ve ever seen I still liked it for the most part.

There are a slew of “found footage” films out there such as “Cannibal Holocaust,” “Cloverfield,” and the very overrated “Blair Witch Project (just to name a few),” and Paranormal Entity is one of the better ones. It is very low budget and has a small cast (only four people actually appear on screen), but there was just something about it that I dug. It had an interesting (though not very original) premise and it kept me entertained for ninety minutes.

Why it didn’t quite scare the piss out of me there are some scenes that are creepy and just genuinely unsettling that I think will bother some viewers. There is a scene with an answering machine message that creeped me out (it is simple but very effective), a bit where Tom (the guy running the camera the whole time) is home by himself and is terrorized by the entity, and the scene that reveals Samantha’s ultimate fate is guaranteed to freak some people out. I think that anyone who is bothered by the thought of an evil spirit invading their home and being tormented by it will be a little disturbed by the movie.

I thought that the cast was pretty good as well. Fia Perera was convincing as the worried mother who is willing to do anything to keep her family safe and writer/director Shane Van Dyke is good as Thomas, even though there are several times where he probably should have put the damn camera down and helped his sister when she was being attacked. Erin Marie Hogan steals the show though in the role of Samantha. Not only is she very nice to look at (I thought she favored Jennifer Carpenter) but this chick can act as well. She owns every scene that she is in and you really feel for her because of what she is going through since she is the main target of the spirit. I see big things for her in the future and think that she has potential to be the next big scream queen (and my newest crush-shhh! Don’t tell my wife).

Though I liked the movie there were some things I didn’t really care for at the same time. There are too many scenes where nothing is going on that bored me to tears. I think there needed to be a little more action and I also would have liked to have gotten a glimpse of the evil spirit but it never happened. I was also a bit let down by the ending as it seemed very rushed to me (what exactly happened to the paranormal investigator guy? He is talking to Samantha and Thomas one moment about how he is going to try to get the entity out of their house and the next time we see him he is on the floor dead). While the ending is powerful and creepy I still think that the filmmakers could have done a lot more with it.
I actually liked “Paranormal Entity” better than “Paranormal Activity (which I thought was way overrated and not scary in the least). I have a feeling a lot of people will disagree with me on that statement but it is just how I feel. “Paranormal Entity” was far from being a perfect movie but at the same time I enjoyed it despite its flaws. There is a lot to like about it and I hope people give it a fair chance instead of just disregarding it and a poor imitation. If you are into ghosts and evil entities (or even if you aren’t) I suggest you give this flick a go.