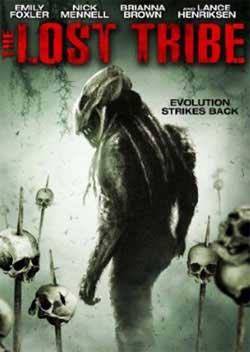 After a devastating boat crash, a group of friends are stranded on an uncharted island where they encounter an ancient tribe of humanoid creatures.

REVIEW:
Tis the season for being lost on an island, with predators in the trees and folks getting eaten alive. Yep, I’m talking about the new release of the film “The Lost Tribe”. There is no getting around the familiarities, that is a pretty easy call. however the real question is, is the film good and what does it do for me as a viewer? “Lost Tribe” has all the quality elements you need from a horror film in that it’s shot well, directed well, flows nicely and has great sound and scoring to it. In fact the sound in this respect brings alot to the table with really elevating those “jump” moments to a level of respectable inclusion. There was a moment when they pulled the predator in a tree scenario where I rolled my eyes a bit but I wouldn’t let yourself get hung up on that fact. The cleverness here is the story inclusion of a lost tribe that threatens the foundation of the church. Lance Henriksen plays a pretty brutal role of a church facilitator (or lack of better word) who comes across as corrupt as any black op government lackey. In fact, the idea also got me to thinking about what the church really is and “realistically” what lengths they would go to protect their public impression. So it gets points for that idea. A foundation that can’t let something as important as the existence of a lost link destroy there entire structure. And if you didn’t catch it, in a quick scene….a rather generous fee to keep that idea in tact. the subplot idea is what gives this film an underlying motive, that most likely isn’t caught right from the get go.

Though this is all getting ahead of things, I should probably simplify what the film is about to let that all gel. A small group of entrepreneur business men and their female partners head out to a island to what is a presumed business meeting over a new venture. The ship gets an unexpected visitor and the whole cruise affair ends up pulling a Gilligan’s island. That’s ok, though as they still have communications and just have to wait it out. Minus one boat but that is what insurance is for.

Their destination is a bit of the wrong place with the wrong elements as the crew ends up capsizing in on a island that is also is host to some pretty savage inhabitants…..namely a lost tribe of cannibals / mongoloid freak mongers that were recently under study by a previous expedition team who were just on the brink of uncovering the whole shebang. If you didn’t get why that was important, refer to first paragraph. These things as I’ll refer to them as, are pretty tribal, pretty primitive and also seem to have a great ability to lurk within the trees and bushes like a serial killer stalkers gone wild. The film plays out as you would expect…… they kill, they chase, they eat, they do what lost tribes do and all to the thrill of the viewing audience. The cast includes Emily Foxler, Brianna Brown, Hadley Fraser, and Terry Notary directed by Roel Reine who has a pretty solid history of directing independent features. Reine though has produced quite a bit more. His latest efforts are the upcoming “Death Race 2” It’s a simple horror film that is enhanced with great production qualities. My initial response was that they maybe should have upped the DVD cover a bit, but….it is what it is.

While there is no denying the derivatives here, its still is an exciting ride of a horror film that goes those extra taboos that a big budget film like predators wouldn’t risk.