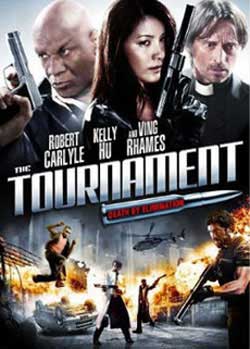 Every seven years in an unsuspecting town, The Tournament takes place. A battle royale between 30 of the world’s deadliest assassins. The last man standing receiving the $10,000,000 cash prize and the title of Worlds No 1, which itself carries the legendary million dollar a bullet price tag.

Tournament is a blast!. Much in the same spirit of older films such as “Blood Sport” “Running Man” and “Death Race”, “tournament is about pitting the greatest and best assassins against each other for a cash prize, title and honor of being the sole survivor. Yes it’s a one winner situation that pits only the toughest and nasty skilled competitors against each other. Unlike similar films these contestants actually conduct the challenge in broad daylight within the city. No arena or closed warehouse setting, this battle is pitted using the basic surroundings and aided with a tracking device to show where each player is located.

The tracking device is lodged inside their ribs so that they can be monitored and tracked. It also serves as a deice which determines if they have been killed per their body temperature. Each player comes to this game on there own which is monitored by wealthy key money spenders from the comfort of the main office. It’s a game for the rich and a chance for the winner to be rich. Simple enough.

As the film opens we come upon the first game already in motion. Joshua Harlow (Ving Rhames) is finishing up his battle to the death with the remaining players. While this film is largely considered an action film, it just so happens to have some of the most goriest exploding head scenes that would give Dawn of the Dead a run for its money. Kills are done crudely, violently and without mercy. A perfect blend of kill, gore and nonstop action for fans of this genre. We are introduced to a few of the key players from the the start of game 2, the follow up competition which is about to launch. Lai Lai Zhen is slick, beautiful and fast. Miles Slade is c**ky, cruel and hardcore.

Yuri Petron is skilled, strong and a weapons expert. Anton Bogart moves like the combination of a monkey and gazelle combined flipping over one obstacle to the next. That and several more make up this band of street warriors. Our unlikely candidate comes in the form of Father Joseph Macavoy (Robert Carlyle ), an alcoholic priest who has strayed too far to cope with. After Anton removes his tracking device and hides in Macavoy’s coffee, the father has unknowingly become one of the players in the game.

Carlyle brings a nice balance of innocence and sensitivity that combines nicely with the rough and tough band of dregs. As the game moves forward not only do players get executed but a few learn from the experience a life lesson in the process.

To bring you up to speed on the rules. 30 are chosen to participate. A cash prize of 10 million goes to the 1 remanding survivor. The only rule is kill or die. Tycoons bet on players and on odds. In this round they have 24 hours to complete the match or the body tracker will execute from within.

This film was an easy one to review, because I simply loved it! Perhaps one of the best battle game films I’ve seen in quite some time it doesn’t let up for a second. At some point I was expecting “Jason Statham” to jump in and start whopping ass though he wasn’t an actor in the project. But fans of his style action will feel right at home with this one.

Also easily said, Kelly Hu, Ving Rhames, Robert Carlyle and Ian Somerhalder give top notch performances. If kicking ass could win an oscar then this crew would give most a run for there money. Hats off to Director Scott Mann who keeps the interest high and flowing from frame to frame. Upon checking credits I can’t say I recognize any of his previous films, though I’m willing to bet we will from this one forward. High octane energy pumped with deadly blows. Check it out!