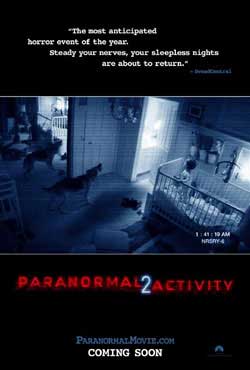 After experiencing what they think are a series of “break-ins”, a family sets up security cameras around their home, only to realize that the events unfolding before them are more sinister than they seem.

It’s 10 AM & the sky is sunny & blue & there’s a beautiful breeze flowing through the air. So why, you might be asking is The Black Saint doing out in this f*cking awful weather instead of his morbidly morose mausoleum?. Well, I decided to catch the earliest showing of “Paranormal Activity 2” in the hopes that the theatre would be empty & I could enjoy the silence like I did when I saw the first one & there were only about 4 people in the theatre.

My hopes were dashed within 5 minutes as I realized there were about 25 patrons in the theatre when I walked in. Still not too many for a 300 seat theatre, but a lot more than I expected for a 10 AM show on a Friday. This, I assume bodes well for the film on it’s opening weekend. It ought to clean up handily over the next three days.

But enough of my discomfort (That f*cking Sun)!! The plot of the film is ingeniously simple: After going through what they think is a home invasion, a family decides to put up a series of hidden cameras throughout the house to catch the culprits only to find out that it ain’t robbers doing all of the breaking in. The film plays exactly like the first one. most of it is static shots of the house as seen by the hidden cameras and the conceit still plays well. When the scene switches to the hidden cam shots you can’t help but stare at them intently. Looking for something, anything that’s out of the ordinary. And most of the time you swear you’re seeing something that isn’t there out of the corner of our eye. It’s an amazingly easy way to get the audiences full attention. Everybody stops & shuts up to look at the screen & hopefully see things that no one else can.

Of course in most of these scenes nothing is going on at all. But we don’t care. We, the audience want something to be there. We’re all looking to get spooked by something that even isn’t on the screen yet. And that my friends is very spooky because after those scenes you can’t help but think that you’ve missed something..anything that might be a clue as to what is going on. I know I was scanning the screen like mad looking for a clue.

The funny thing is that even in the scenes where you decide nothing is happening, something actually is. Minor as they may be there are clues in some of these static shots. The actors are not credited in the film at all except for Katie Featherston as Katie. The same character she played in the first film. the plot of this film takes place 6 months before the first film & Katie is visiting her sister, Christie & her family which consist of a step daughter, Ali, a baby boy named Hunter & Kristi’s husband Daniel who turns out to be the skeptical one of the brood, for a while anyway. 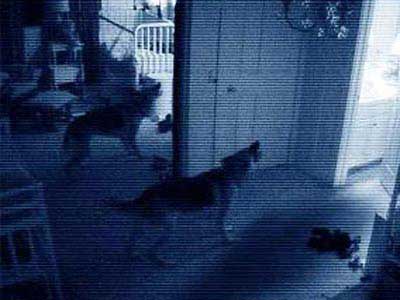 Kaie’s husband Micah from the first film also makes a few appearances which are crucial to explaining topics that took place in the first film. As a matter of fact before his first appearance there is a documentary style card explaining that these scenes were filmed 6 months before his death. He’s only in the film for a few minuted total but his scenes are crucial to connecting the 2 films together. As a matter of fact so are Katie’s scenes. In a sense she’s the real star of the picture because she is the bridge between the two films & she closes both of them.

The only person who really seems to know what’s going on is the nanny, Martine. A hispanic woman who doesn’t speak very good english but tries to convince the family that something is “Bad” in the house & they should leave. Of course they don’t & eventually fire Martine because of her beliefs & a ceremony she tries to perform (Burning Sage throughout the house) to protect the house from evil spirits. The family (especially dad) should’ve listened.

When Christie tries to tell her sister about the goings on in the house, Katie instantly tells her to stop talking about it. Katie cites the “Problems” they had when they were children & doesn’t want to bring them up again. Another clever plot point to connect the 2 films together. The script by original director Oren Peli & Michael R. Perry is very clever in the way it weaves itself to the events in the original film. Very subtle at first and then POW! right in the kisser. 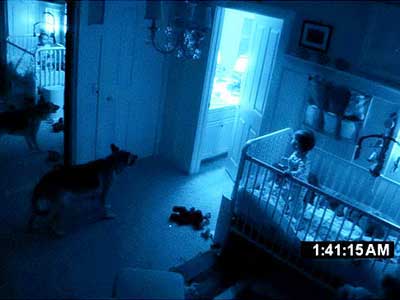 The family dog is quite aware of what’s going on & barks throughout the film at seemingly nothing. But nobody pays much attention to the dog until it’s basically too late. The father, Daniel is annoyingly hard to convince even when video proof is shown to him, he has an answer as to why whatever was recorded happened. You end up hating the bastard & there were actually a few cheers when he gets his comeuppance.

The special effects which are few & far inbetween are still quite effective even though they’re basically the same as in the first film. Watching the baby levitating out of his crib is very unsettling & there is one massive jump scare 3/4 of the way through the film that made the entire audience jump up in unison which was way cool. The effects are perfect for the mood the film is trying to create. They accomplish what their expected to accomplish with amazing simplicity.

All in all The Saint’s giving this one 3 1/2 Shrouds out of five. It’s a good, not great little shocker that will scare you but you will get more out of it if you saw the first one. It also ends (unfortunately) with the door wide open for a 3rd entry into the series. I thought the first one ended perfectly & while this one ends with a few questions left to answer, I don’t necesarily think they should be answered. You know what I mean? Too much of a good thing & all of that sh*t applies to this one. If a 3rd one is being prepped for production it should end there. Don’t make a mockery of a good thing guys….. 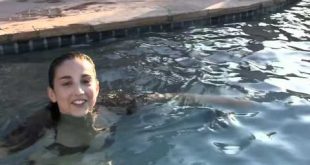 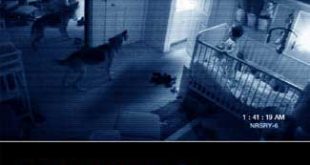