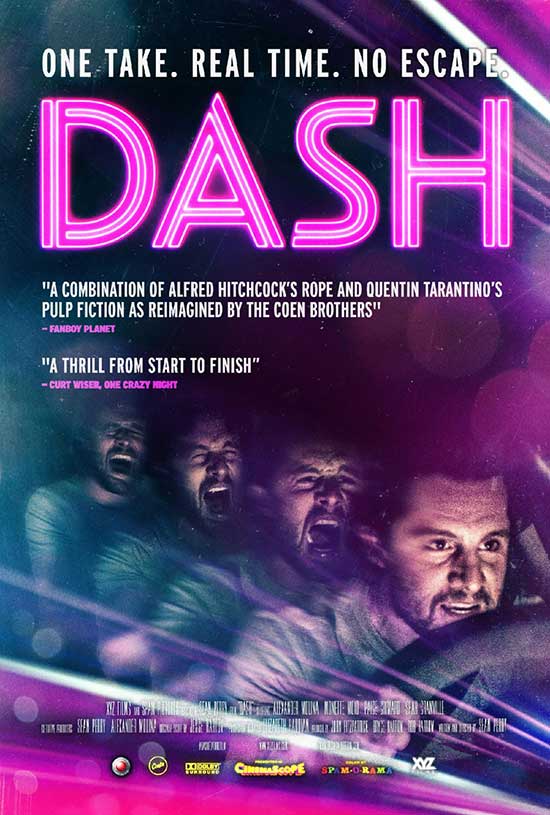 XYZ Films is proud to announce the release of DASH, a thriller about a rideshare driver’s wild overnight shift in Hollywood. Written and directed by Sean Perry (The Homebodies, Saturday Night Live) and starring Alexander Molina (Evil, Afternooner), DASH is a true one-take feature film, which was shot while driving through Hollywood. Below you will find the poster debut, trailer premiere and additional release information. DASH Comes to Digital and VOD on November 29, 2022.

The crime-filled streets of Hollywood come alive as you’ve never seen them before in a groundbreaking, one-take thriller following Milly (Molina), a rideshare driver who leads a double life.

DASH follows Milly, your average everyday rideshare driver preparing himself for a night shift behind the wheel… by purchasing a massive amount of cocaine from a prostitute. On the perilous Hollywood streets, he attempts to sell the drugs to his unassuming passengers including: a homosexual thruple, some phone-obsessed gen Z’ers, and even an off-duty police officer.

His attempt to illegally fund his sinful actions takes a literal turn for the worse when he picks up a drug addict going through severe withdrawal. Desperately trying to take his nefarious, double-life to the grave, he continues on, only to keep digging a deeper grave for himself.