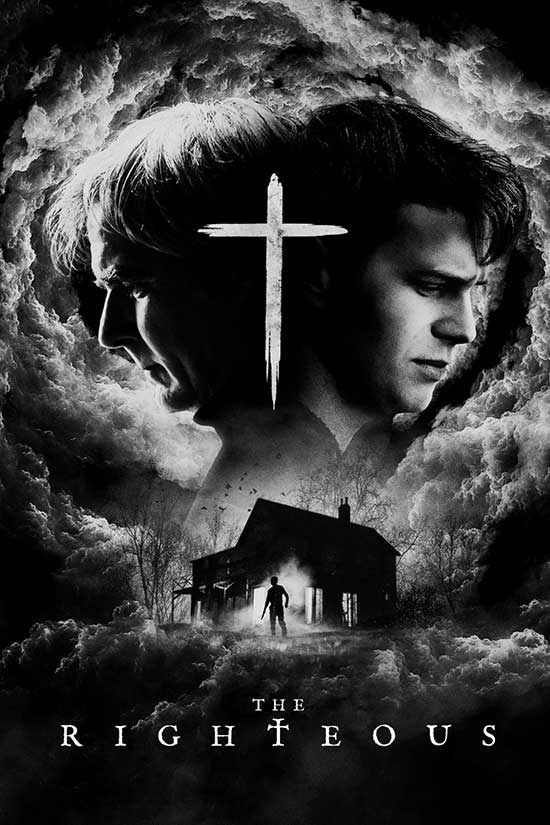 Arrow Films Debuts First Look at The Righteous
From Director/Actor Mark O’Brien
Starring O’Brien, Henry Czerny & Mimi Kuzyk
O’Brien’s Debut Chiller Set for June 10th Release
Arrow Films have unveiled the official trailer for the extraordinary chiller The Righteous, an award-winning standout on the genre festival circuit. Arrow Films is planning a June 10th digital release in the UK, US and Eire on ARROW, the brand’s SVOD service.
This first feature from director-actor-writer Mark O’Brien (AMC’s “61st Street”, Ready or Not, Blue Bayou) is a dark chiller about a burdened man who feels the wrath of a vengeful God, after he and his wife are visited by a mysterious stranger. The film stars O’Brien, Henry Czerny (Ready or Not, Mission Impossible, “Revenge”) and Mimi Kuzyk (The Day After Tomorrow, The Final Cut, “Shadowhunters”).
The Righteous was produced by Mark O’Neill and Allison White. Executive producers Marc Hamou, Walter Lawlor, David Miller and Mark O’Brien.

The Righteous had its World Premiere at the Fantasia International Film Festival in 2021, winning the Cheval Noir and Silver Award, and has since gone on to win a Bloodie at the 2021 Blood in the Snow Film Festival, and the Grimmfest Award at the 2021 Grimmfest.

The film has been acclaimed by critics on the festival circuit, including such raves as: “A brazenly ambitious horror film about grief and belief” and “Mark O’Brien dominates both in front and behind the camera” from Alexandra Heller-Nicholas of The Alliance of Women Film Journalists, “Deeply engrossing and affecting… the film packs a philosophical punch from Brian Fanelli at Horror Buzz, and “a remarkably assured directorial debut from O’Brien that provides a gratifying experience that is sure to chill, linger and provoke in ways that harken the best of horror cinema” from Harris Dang of In Their Own League.

Writer/director/star Mark O’Brien shared: “As a dedicated fan of Arrow Films, I am beyond thrilled to be partnering with them on my debut feature film and continuing my relationship with Vortex Media. Arrow Films are a filmmaker and cinephile’s dream. It’s an honor to be a part of their tremendous catalog.”

A unique and darkly engaging spiritual thriller, strikingly shot in black and white, The Righteous tells the story of Frederic (Henry Czerny) a grieving man struggling with his faith, who helps an injured young man, Aaron Smith (Mark O’Brien) who stumbles onto his property one night, claiming to be lost in the woods. Frederic and his wife (Mimi Kuzyk) invite the man to stay for the night, but Frederic soon begins to have doubts about this enigmatic stranger’s story – and his motives for being there. When Aaron asks Frederic to commit an unspeakable deed, it becomes clear that the man is not who he seems, and has been sent to test the very limits of Frederic’s existence.