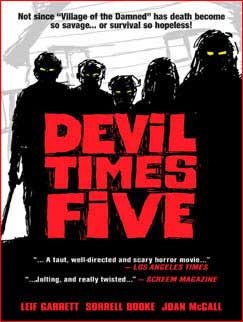 1970s pop star Leif Garrett and his little sister Dawn Lyn star in this creepy horror tale about five kids who escape from a mental asylum and wind up murdering guests at a winter resort. The rich vacationers invite the wayward kids to stay with them, unaware that their new house guests are more interested in slaughter than sledding. The juvenile sociopaths kill off the adult snobs one by one — in very inventive ways. Sorrell Booke also stars

Originally titled ” The Horrible House on the Hill, this film is one I wasn’t sure what to expect. It stars a much younger Leif Garrett as a member of band of kids who have no problem killing adults. Apparently a mental institution bus has run off the road while the kids escape into the forest till coming upon a winter resort. By the time they do show up we are pretty much content with seeing these annoying rich couples get murdered off anyways.

Filmed in 1974, it has all the makings of a bad 70’s film. Bad hairdo’s, crappy furniture, and “My 3 sons” style cutaways are good and plenty in this mess. Our first act of real violence is shown in slow motion and drags on for what seemed like 10 minutes. Why?…damn good question.

The children are weird to start out with and seem to have odd traits about each of them. One acts like a soldier, one a nun, one seems overly sophisticated…and well you get the idea. Leif Garrett is way pre-teen idol in this really early performance, however he does play his part well.

As the story continues, the children become more clever with killing devices and acts of violence. I suppose this pre-SAW ingenuity could be a bonus, but what it ends up being is a bunch of snot nosed brats with no moral for human life. In some ways it’s a bit comical how the adults are so easily manipulated to fall into their traps of violence. I thought the outcomes were too convenient at times for believability What may have been clever in the 70’s was a bit lethargical to watch now. The film pretty much drags till these final moments of chaos. I’d suggest one not to watch this late at night only to the effect that it will droll you to sleep.

There wasn’t much going here. I think maybe I was hoping for some lost gem and came out with “just” lost.

Perhaps it worsened the experience with a 70’s style music background that sounded like a cross between a Brady Bunch episode and something you’d hear in a “Hart to Hart” viewing that dug into my spine. To tell you the truth, it took me 3 days to finish this as I kept getting anxious to do something else. You can order this film alone or I’ve seen it on a few of them 50 pack DVD collections for $15. If you need to see it, then this is the preferred package, because if you don’t like it, you have 49 more films to peruse.

I’m gonna have to pass on this, with a “won’t-watch-it-again-in-this-lifetime closing.