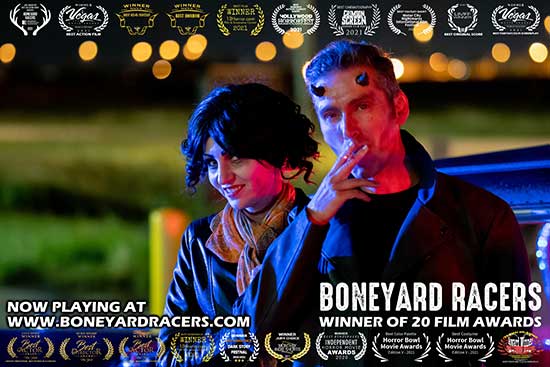 When teen couple, Sam and Jackie, accidentally stumble upon a ghoulish party on Halloween night, they’re challenged by the devilish Johnny to a supernatural drag race. This is the premise behind BONEYARD RACERS, a horror-inspired fantasy short which has won or been nominated for dozens of awards the world over.

Starring Thomas Kassian (Noise, Hot Box) and Ryley Shandro (Rutherford Manor), written by and co-starring Neil Chase (Broken, John 316), directed by and co-starring David Heacock (Ordinary Decent Criminal, Hyde), and produced by and co-starring Lindsay Christopher (Father of Nations, Gone by Dawn 2: Dead by Dusk) and Preston Ewasiuk (Rutherford Manor, Babageddon), the team set out to create a truly unique world in BONEYARD RACERS. And with cinematography by Logan and Philip Wilson (Bagman, Bagman Rising), and the soundtrack provided by none other than Canadian Rockabilly sensation Punch Drunk Cabaret, who also appear in the film, it all combines for one hell of a ride.

As David Heacock states, “We are so grateful for all the love BONEYARD RACERS has received from festivals and fans alike, and it really helped to raise interest for the film. We are thrilled to share it with the world!”
FULL FILM: www.youtube.com/watch?v=nMVJBM0TcR8
In addition, one common response for BONEYARD RACERS was that viewers felt it was too short and should be expanded into a feature. Neil Chase took their words to heart. “I put pen to paper and wrote a feature based on the short. It’s been well received and has already won a couple of screenwriting contests, including at Hollywood Horrorfest and 13Horror.com. It’s definitely on our to-make list!”
The successful festival run helped the Brimstone Pictures team to secure funding for their first feature, an end-of-the-world dark comedy thriller with a supernatural twist, called SPIN THE WHEEL, which they aim to be ready in late 2022.
Share