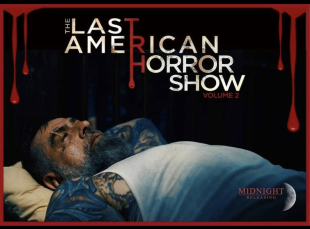 How did you get attached to The Last American Horror Show Vol. 2?

I was a fan of Michael s Rodriguez for a while.  Heard about him filming “A world gone mad” and tried to work with him on it,  but unfortunately my schedule didn’t allow .

He told me later about an anthology of his and Montgomery Dodson, Rick Vasquez and he had a the role of killer Callahan and I would be working with Mel Novak (Game of Death) telling me these tales of death.

And I get to work with my friends, Dana Carney – “ShadowMarsh and “Tino R Zamora – “The Beast Beneath”,  and Art Paul – “Arachnado “.  Sign me up

Tell us about Killer Callahan?

Who is Killer Callahan.  A man on death row closer to death than life.  Seen it and done it ..  Well ….thinks he has till he meets Moses “Mel Novak “ and they have a long conversation.  Watch the movie and find out ..

Do you have a favorite scene?

Being able to work with MEL NOVAK was an absolute honor . “Game of Death, Force of One, “  The original heavy.

I was a fan ..  And man the cast is amazing Helen Udy, Lynn Lowry, Maria Olsen, Jonathan Tiersten, and many more… 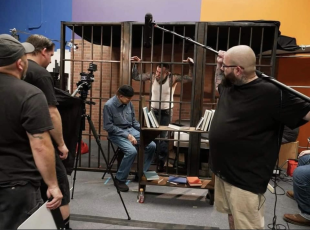 What was the hardest part of working on The Last American Horror Show Vol. 2?

Hardest part was not getting to work with all the talented people involved in this film .  Especially the talented Geovonna Casanova.  We are always in the same movie just not in same scene except for Axe-Grinder 2.

How was it working with Montgomery Dodson, Michael S. Rodriguez, and Rick Vasquez?

This team worked their asses off for the love of film.  I’m proud to have been a part of everyone’s paths.

Let’s talk tattoos! Do you have a favorite?

My favorite tattoo is my rib cage – Boris Karloff Frankenstein.  I was obsessed as a kid.   I have a evil dead tattoo dead by dawn on my hand most of my tattoos are movie related.  If ya see me I’ll show them to you.  I’m a big kid ….a fan

What else should we be on the lookout for from you?

In April I have a sci-fi movie – Joe Blands – “Colonials“.  An absolute stellar cast and a crime film, Jonathan Salemi’s THE LAST DEAL.  Amazing cast premiering in my home town, BOSTON.

I have quite a few more Horror films releasing soon.

Currently, I’m a police officer in my next two projects and I’m always on the lookout for new exciting roles.