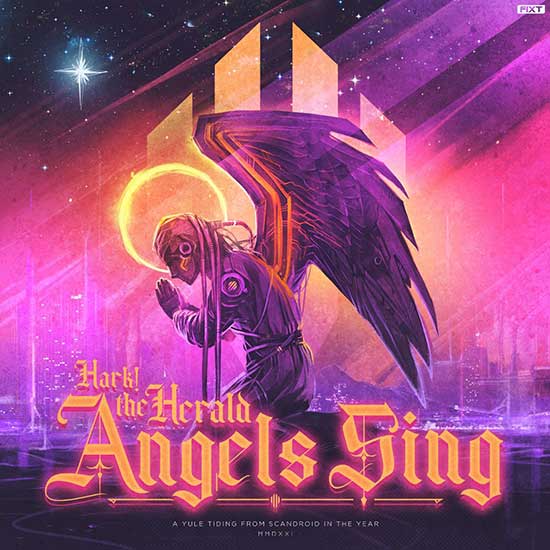 Scandroid’s first holiday cover song, takes the classic “Hark! The Herald Angels Sing” and adds his unique alt/synthwave stamp on it. Interlacing a smooth vocal performance, with synth tones, and traditional sounds of the original, Scandroid’s “Hark! The Herald Angels Sing” is a unique synthwave laden treat you’ll want to stock into your holiday playlist.

“Christmas is a very important and sentimental holiday for me, and for that reason, the idea of covering Christmas songs has been on my to-do list for a number of years. As I contemplated over my list of potential covers “Hark! The Herald Angels Sing” jumped out as a great fit for a Scandroid cover. I hope you enjoy the song and have a happy holiday season!” – Klayton (Scandroid)
“Hark! The Herald Angels Sing” is out now on all platforms from independent multi-genre label FiXT.
Purchase/Stream:
outnow.io/t/hark

The result is an immersive audio experience infused with imaginative sci-fi lyrics and atmosphere. In addition to creating original songs under the Scandroid name, Klayton has also brought his distinctive style to some of his favorite tracks from the ‘80s, including Michael Jackson’s “Thriller” and Tears for Fears’ “Shout.”

Scandroid’s music has cracked the Top 10 on the iTunes Electronic Albums chart and the Top 5 on the Billboard Electronic Albums chart. Along with his original songs streaming in the millions, Scandroid’s music has also been the subject of several popular remixes, including a Dance with the Dead remix of “Neo-Tokyo” that has accumulated 12 million combined streams between Spotify and YouTube alone.

Following the Scandroid self-titled debut album in 2016, Klayton released a second full-length album, Monochrome, in 2017. This was followed by the most ambitious project in Scandroid’s history to date, as the artist embarked on a pair of twin recordings released across 2018 and 2019, The Darkness and its follow-up, The Light. These were later collected together with three all-new tracks and additional singles in a massive 19-song double album, The Darkness and the Light, released in late 2020, followed by a remix version Dreams Of Darkness, Visions Of Light released in late 2021.