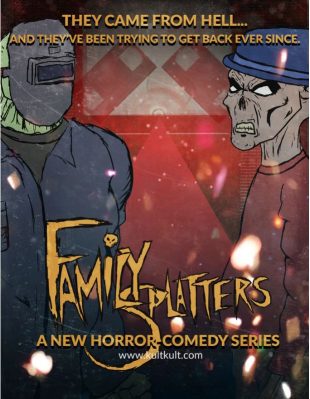 KultKult Entertainment — an independently owned film production and animation studio specializing in the cult and horror genres — announced the launch of a new crowdfunding campaign aimed to raise funds for season 1 of the award-winning animated series: FAMILY SPLATTERS.

Speaking on the launch of the series, producer Nick Damage said: “We were planning to do this on a shoestring budget at first. But after we finished writing the episodes, we were really stoked about what we had here… This went from being a hokey side project to being something that we really believed in. We want to do right by cult and horror audiences. We believe that this show needs to be made. And while the budget we’re seeking is 100x less than what a major studio would require, it’s still more than we can come up with out-of-pocket. So we’ve arranged some really great rewards that we hope fans will love and give them another reason to get behind this project.”

In addition to VIP access for the season 1 backers-only online premiere — some rewards put backers right into the show itself:

– A backer can have their name graffiti’d on the wall in the background of a scene. But “proceed with caution”, Nick Damage warns, “we can write whatever we want to about you”.

– 5 backers will get to name a major character on the show for less than 200 dollars, and 10 backers will be mentioned and talked about by name for just a few dollars more.

– For backers that aren’t afraid to shell out the big bucks to be immortalized in the annals of animated cult horror history — the KultKult team will draw and animate their likenesses into an episode of the show… Where they’ll be promptly killed. Note there is a limited, albeit slightly more expensive reward tier that allows the backer to survive.

Other rewards include the fictional glam era “house band” of the show, ASSHAMMER writing and recording a song about the backer, naming the show’s town after a single backer, and VIP access to an exclusive online virtual party for cast and crew only (expected to be held through Minecraft, Fortnite, Roblox, or some similar platform).

Cult and horror fans can check out the rewards and special campaign video here:
www.kickstarter.com/projects/channelunderground/family-splatters-season-1

About KultKult Entertainment: KultKult Entertainment is an independently owned film production and animation studio specializing in the cult and horror genres. Sprung from disenchantment after working with major production studios, the founders of KultKult seek to produce features and series that are akin to things you’d find on late night cable TV in the 90’s and early 2000’s — but with a modern twist.