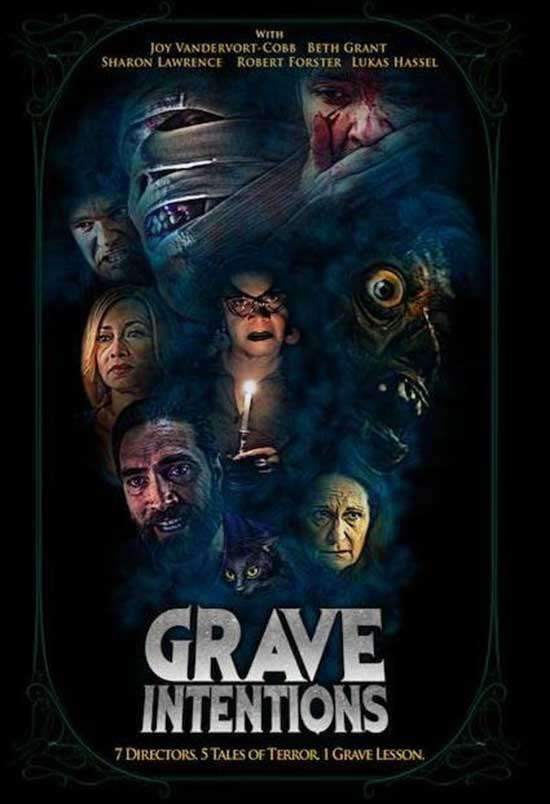 In this anthology of chills, thrills, and kills, a practitioner of the magical arts teaches the basics of her craft. The most important lesson? You must be mindful of your intention.

Five of her customers are about to learn this the hard way: A woman looking to change her luck gets ensnared in a dangerous game; In the quest for justice, a man is transformed into a monster; In an attempt to right a wrong, a woman rescues a stray cat; A father and son are torn apart when a joke goes too far; A young girl needs protection from the demons in her life.

“The road to hell is paved with good intentions.” – English Proverb

I love horror anthologies. I also constantly wonder about that saying… “The road to hell is paved with good intentions.” I think people don’t often understand the words and what they put out in the universe. Grave Intentions opens with the quote and Magical Madam Josephine promoting her website in such a unique host way.

She is the Elvira, the Rod Serling, the Alfred Hitchcock of this film. Joy Vandervort-Cobb portrays Madam Josephine. Don’t mess with magic or words if you don’t fully understand or if you plan on sending all that negativity out there to the universe. Madam Josephine is discussing candles, the power of magic and helping a customer. 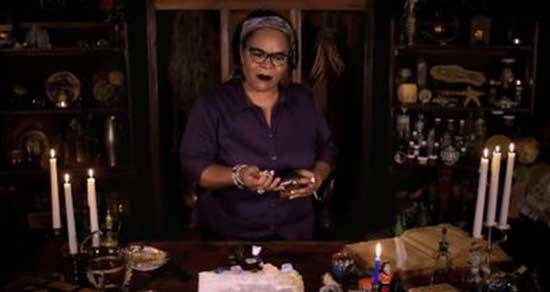 The Bridge Partner is the first story. This story opens with Mattie (Beth Grant) looking for a bridge partner and in walks Olivia (Sharon Lawrence). Both of these women are talented. Mattie is joined by Olivia and they play bridge and then Olivia whispers something in Mattie’s ear.

It’s kind of scary that someone can smile in your face and be deceitful and lie. Mattie heads home, and she is uneasy and just scared. Robert Forster plays Don Whalen, Mattie’s husband. Mattie tells Don what Olivia said to her. It seems like maybe Olivia is working some kind of magic.

Apparently, Mattie is Olivia’s sheep and Olivia is the dog. This is a good one so far, it’s creepy but also psychologically getting to you.

Madam Josephine is back to discuss Voodoo dolls, and puppets.

The Disappearance of Willie Bingham is the next story. Gregory J. Fryer portrays George Morton. Kevin Dee portrays Willie Bingham, he’s in prison for murder. They said he murdered a girl; he says it was the booze and drugs.

They are performing surgeries on Willie. He’s losing limbs as each surgery goes on. It’s not just limbs now but organs. Willie is surgically taken apart. The writers do a good job with unique stories.

Madam Josephine is back. She has some more wisdom in regards to magic.

Violent Florence is the next story. Madam Josephine mentions crystals and manifesting change. Charly Thorn portrays Florence. Florence stops to save a cat. A group of girls have the cat, they are spraying the cat.

(Please don’t hurt animals’ folks. No animal is bad luck. Cats and dogs just want love and to find forever homes. I’m not saying movies or people cause this either. That should be a disclaimer.)

Florence is home now and she goes inside and brings the cat with her. Florence stays in sort of a warehouse with a boat inside. She chills on the boats and pixie sticks are her dinner choice. Oh lord, this one is making me nervous. WHY!? What is she doing? I should say Trigger warning, I won’t go into spoilers but there is violence with the cat.

This is really disturbing in so many ways.

Back to Madam Josephine. She’s talking more about crystals and moves on to talk about charmed bags. “A spell in a bag.”

Luke’s mother played a horrible prank, if that’s what you even want to call it on Luke so he tried to get her back, and well, I’m not sure about this family. What causes something like this to happen? What causes a woman to do this to her child? Now, Luke (Christopher Morson) visits his father because he’s locked up.

These stories are fascinating with great special effects. The cast is doing a good job.

Madam Josephine is back again. She’s talking about charging a talisman.

This story is called, Marian, and it stars Astarte Abraham as the aunt and Johanah Basanta as Marian. Marian is drawing this creature played by Paw Aya Bugarin. Okay, is this creature to protect Marian. Lord, what human beings do.

The creature shows up after the distressed incident between Marian and the aunt. This is DISTURBING. The writers give depth to these characters, some backstory, and the ability to show the lack of humanity in human beings. Human beings can be the real deal monsters.

Maybe Marian drew the creature as herself to protect herself? Make sure to check out this horror anthology. It tells one unique story.

Make sure to check out Grave Intentions, and here’s hoping they make a second anthology.