Bayview Entertainment has officially launched it’s Roku channel with over 400 of their best titles including comedy, horror, drama, science fiction, documentaries, and more.

To download and start watching, you can search for “Bayview Films” from your Roku device’s channel store.

OR, click this link and log in with your Roku account. When you do, the channel will be downloaded to your Roku device next time you turn it on! 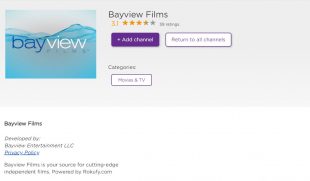 Among Bayview’s extensive catalog you will find acclaimed feature films from Monterey Media. Monterey Media’s films have been nominated or won Independent Spirit Awards, Golden Globe Awards, and NAACP Image Awards, have had 14 TIFF premieres, premieres at Sundance, SXSW, and the Tribeca Film Festivals, as well as being included on Roger Ebert’s 10 Best Independent Films list.

Bayview is proud to exclusively distribute Kultur International Films to retail. For the last three decades, Kultur has been the leading source of world-class performing arts titles, committed to preserving the legacy of great performers for future generations to appreciate and enjoy. Programs include historic performances by legends Luciano Pavarotti, Mikhail Baryshnikov, Frank Sinatra, Leonard Bernstein, Rudolf Nureyev, Margot Fonteyn and many others.

Last but not least, BayView is honored to partner with hundreds of independent film and video producers who have trusted BayView with carefully planned distribution for their labors of love.