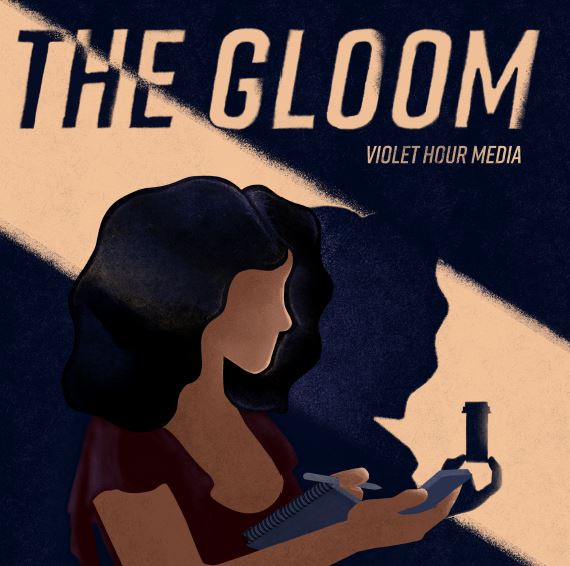 The fourth show to premiere on The Violet Hour horror podcast network, THE GLOOM is a story about a string of heinous, unsolved crimes committed by a group of teens in the 90s, which compels an investigative journalist to uncover the horrifying truth about a supernatural cover-up tied to her own past. It’s The Ring meets Serial. This eight-part fiction series explores the seedy underbelly of psychiatric institutions and the mental health industry in a faux true crime podcast style. Starring Tobin Bell (Saw) as the depraved Dr. Lasher.

Episode One: “In Medias Res” / Samantha Williams, an investigative journalist, introduces the infamous unsolved early 1990s cold case of the Filmore Four, a group of teenagers caught up in a ghastly web of murder and destruction, tied to a Queens, New York psychiatric hospital, and quite possibly, their emotionally damaged therapist, Dr. Darlene Harrington. Episode Two: “Bedtime Stories” / After obtaining previously unseen evidence, Samantha dives deeper into the history of the Filmore Four, the hospital they called home, and the suffocating gloom that surrounded their lives.

Episode Five: “If You Have Ghosts” / After a series of bizarre and unsettling events, Samantha fears that her inquiry into the Filmore Four may be jeopardizing her life. Episode Six: “It’s All Come Undone” / In the wake of a violent death, Darlene Harrington’s medical practices are put to the test and her treatment of the surviving members of the Filmore Four is jeopardized.

Episode Seven: “Disappearing Act” / Samantha uncovers the true nature of the darkness on the tapes.

Episode Eight: “Elegy” / In the wake of tragedy, Marc Wingard, the producer of Into the Gloom, brings resolve to the story through a startling connection from Samantha’s past.