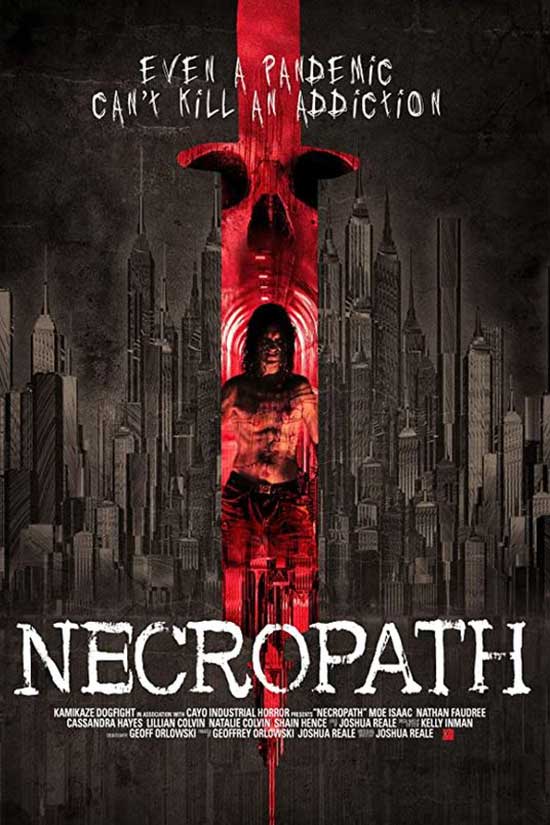 A mentally deranged maniac stalks victims to fulfill his drug addiction and sedate psychosis until he becomes the victim of an unexpected invasion of the undead. This is a prototype film, to be used to present for future larger production.

Scag is just your average, everyday smack addict with a WWII air raid siren in his head that likes to blare at random times. It helps keep him humble and VERY angsty. It’s a shame; he has such simple needs – money, knife, gun. Unfortunately, if Scag demands these things from you, and you hesitate, he has a tendency to hit, stab, or shoot to drive his request home.

Our anti-hero’s life is about to get weirder. It seems there is a rash of zombie-like people attacking, killing, and eating other people. In fact, one such freak prevents Scag from getting a much-needed donation from a woman trying to get away in her mini-van. Worse yet, the zombie dude bites poor Scag, so now he is infected. But he doesn’t crave flesh as much as he just wants to have his smack and inject it, too. 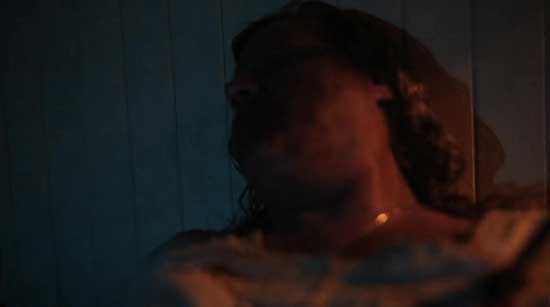 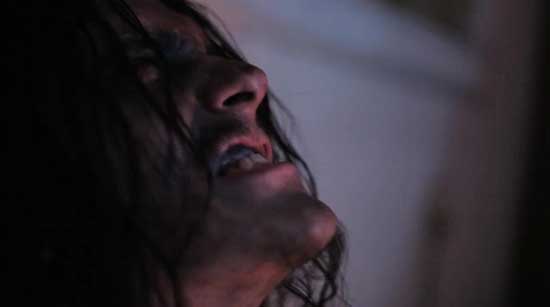 Various characters wander through the Hellscape of the zombie uprising. Most of them are, at some point, confronted by Scag, who has now taken much damage as well as multiple lethal wounds. Yet he is still that boyish scamp whose primary words are “Munny!!! Mine!! Give!!!”

“Necropath” (whatever that means) is a grotty little film centered around the gent mentioned above. We meet him as he kills a couple of lovers who decided to have fun in their car. He takes their money. Next, he is in a filth-encrusted hovel pumping junk into an arm laced with open sores.

The introduction to Scag pretty much sets the tone for the rest of the film. Slime, blood, rot, and worse seem to coat most visible surfaces in movie. Not recommended for people who suffer from obsessive cleaning disorders as any given scene will have you cringing, shrieking, or reaching for your basket of disinfectants. 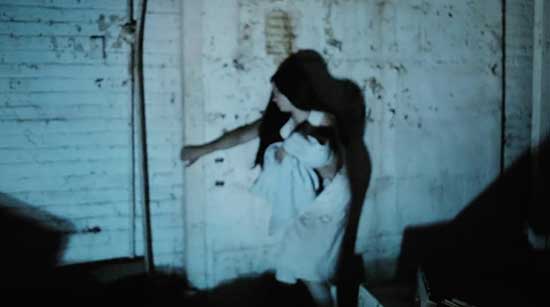 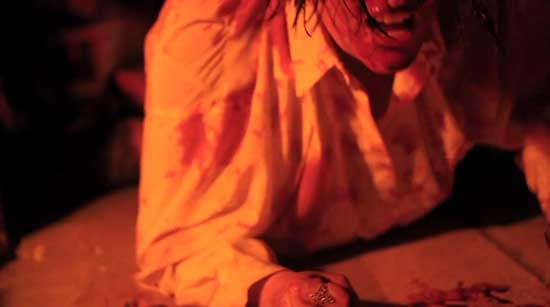 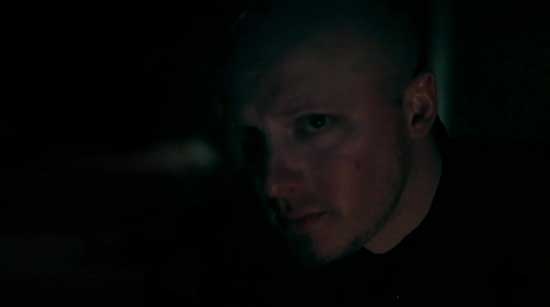 To be honest, the look and feel of this film fit rather well with the content. Other than a couple of minor characters, the bulk of the people in this film are far from squeaky-clean types. Having people like that wander through a grungy, chaotic environment full of trash and discarded bits makes it feel as if the people are cast off, leftover debris from a society/culture that has collapsed as a result of its putrefaction.

While “Necropath” is comprised of three short segments linked by Scag and the ongoing zombie/infection epidemic, do not look for an overall story arc. There is no Point A leads to Point B resulting in Point C here. At best, you have “jacked up” and then “more jacked up” with an unresolved end that may or may not open the door for a follow-up film.

Essentially, the film is visual tone poem of disintegration and atrophy. Familial bonds and human decency are dead; there is only survival, but is that even worth the effort in the end, given how dire the world is or will become. People like Scag are likely to be the rulers of this new world – obsessive, self-serving, amoral, and brutal. 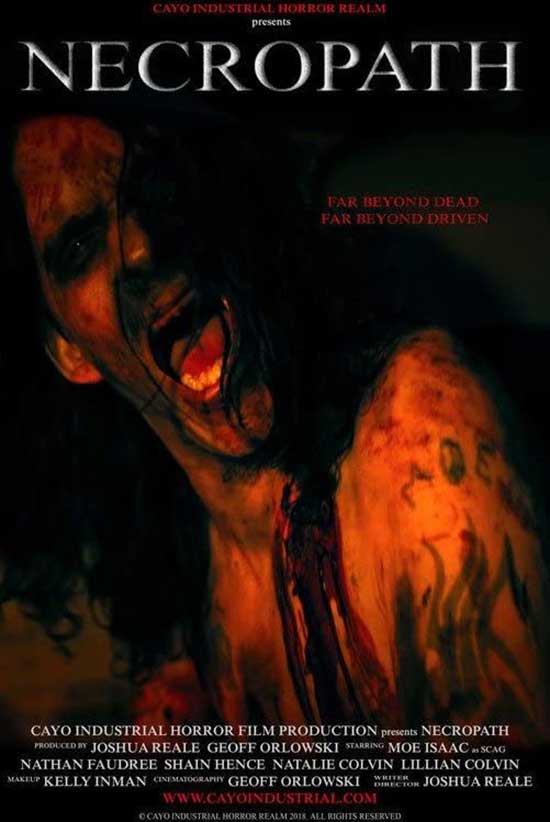 One can certainly create a work of art from such elements, but “Necropath” falls short. Bad editing/direction robs some scenes of their proper action as it seems the camera is either too close or too far away to properly display the visual flow of chase and fight sequences. Performances range from over the top to unresponsive to confused. Lighting, while effective if it had been used sparingly, is looks to be filtered through gels coated with mud and feces, giving everything a hard-to-focus-on murkiness. Lack of dialogue/exposition lends heavily to the nightmare-like quality, but creates more questions that may leave the average viewer lost and/or frustrated by the time the end credits roll. 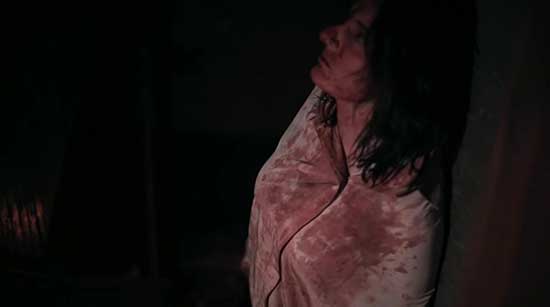 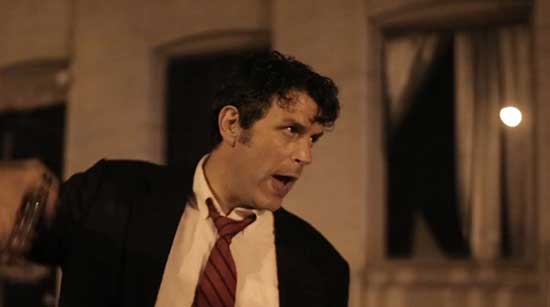 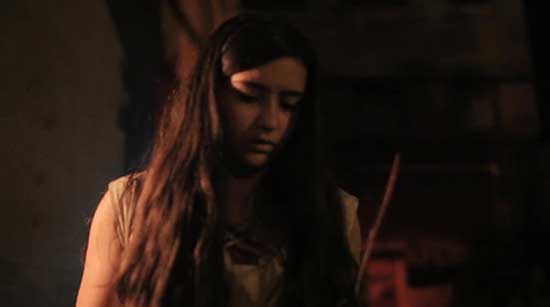 “Necropath” certainly turned out to be more interesting than it deserves to be due to it approaching a very worn-out premise with a unique perspective. Even that is not enough to protect the film from its shortcomings, though it goes give hope that the filmmakers will apply their different approach to a film that is more accessible to a broader audience and less of a college-level arthouse experience.