Home | Culture | Events | Horror Events | Winner Selected out of 5,000 Entries for On Location Stay at Site for Iconic Film “The Silence of the Lambs”

“DYING” TO FIND OUT WHO’S THE WINNER OF “KILLER” CONTEST

FOR THE VERY FIRST OVERNIGHT STAY AT ‘BUFFALO BILL’S HOUSE’? 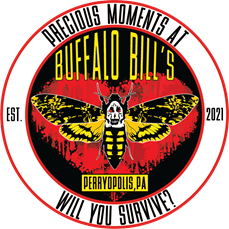 Winner Selected out of 5,000 Entries for On Location Stay

at Site for Iconic Film “The Silence of the Lambs”

Buffalo Bill’s House, the iconic home to the serial killer of the same name in the five-time Academy Award winning film, The Silence of the Lambs, recently concluded a “killer” contest to win a chance to be the very first brave soul to stay at Buffalo Bill’s House. The contest received over 5,000 entries. Willing “victims” entered at their own risk for a chance to win an exciting 2-night stay for two at the charmingly infamous house of the cinematic serial killer.

If you’ve been dying to know who won, you’re not alone!  The winner, who was announced late last week via Instagram live, is Jeanette Milo, who hails from the Hudson Valley region in New York state.  Jeanette was selected via a random drawing to be the first “willing victim” guest to stay at the house when it officially opens for business as a boutique accommodation and cinematic destination sometime later this year.

“I couldn’t believe when I got the email saying I had won the contest to stay at Buffalo Bill’s House!,” exclaimed Jeanette. “I have been a horror fan my entire life and am fascinated by real life movie sets and their history. Having the chance to stay at Buffalo Bill’s is like a dream, and I intend to crack open the complimentary bottle of Chianti as soon as I enter the house!”

Fans might want to know if Buffalo Bill himself will open the door for Jeanette. While “Bill” is not currently available, fans will certainly recognize the famed front doorway of Buffalo Bill’s House, where movie fans first meet Buffalo Bill, a.k.a. “Jame Gumb,” played by Ted Levine, as well as the exterior of the home, the entry foyer, the dining room, and kitchen leading to the basement, all of which had scenes from The Silence of the Lambs shot in them.

The winner of the contest also knows a thing or two about movie sets and make-up, being a graduate of Tom Savini’s Special Make-Up Effects Program located at the Douglas Education Center in Monessen, PA.  Students at the famed school not only learn special effects and make-up for films but also exhibit and display design.

Buffalo Bill’s House, built in 1910, is a magnificent three-story, four-bedroom Queen Anne Victorian home, which sits on 1.7 acres in the town of Perryopolis, Pennsylvania, about 30 miles outside of Pittsburgh. Fans always want to know if there really a well in the basement, the site of the terrifying film finale where Agent Starling (played by Jodie Foster) confronts the killer.  Sadly there is not, but fans would not be disappointed to know that there is a brick-lined coal cellar downstairs.  Scary in itself, it’s certainly a potential site for future visitors and film buffs to put their creepy imaginations to work, or else get the hose again!

Chris Rowan, the new owner of Buffalo Bill’s House, has future plans for the house that include recreating the set of the well with a replica of the physical well for fans to take pictures in, as well as installing Buffalo Bill’s “workshop of horrors”, complete with a sewing station and dressing mannequins, among other identifiable props from the film.

Buffalo Bill’s House has retained much of its original charm, and features the original hardwood floors, woodwork, light fixtures, pocket doors, and fireplaces, all in pristine condition.  The famed Buffalo Bill’s House also features a wrap around porch and gazebo, a rose bed garden and fountain out front,  a 3-car detached garage, a vintage train caboose that sits next to the in-ground pool, and a firepit located on the expansive grounds. The home also sits along the Youghiogheny River and provides beautiful views of the river from the house.

For more information on how to book a future stay, please visit www.buffalobillshouse.com or call: 1.833.BUFFBILL