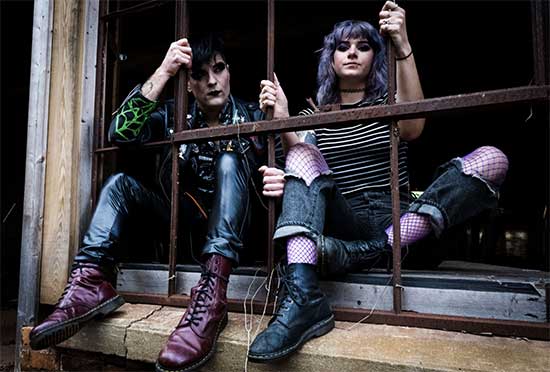 Is your blog interested in covering Vision Video’s new music video for the single “Comfort in the Grave“? The video is an Italian 80s horror inspired mini-slasher pic. It’s produced, written, directed and edited by ex-paramedic & frontman Dusty Gannon.

On “Comfort in the Grave,” keyboardist Emily Fredock takes the lead on vocals. Fredock once met a very peculiar guy at a bar… and after some deliberation and drunken antics, she and some friends ended up consensually, temporarily burying him in her backyard. It became a running joke with a couple of her friends, who said she should write a song about it.

Vision Video uses their unique post-punk style to convey a desperate message about the dark undertones of our existence.

The free-spirited band’s debut album Inked In Red is set to arrive April 16.

Gannon and Fredock join bassist Dan Geller (I Am The World Trade Center) and drummer Jason Fusco (Shehebe). The quartet recorded with producer Tom Ashton (The March Violets/Clan of Xymox/Sisters of Mercy).