Tesla, Sputnik, A Call to Spy and Centigrade will be released by Shout! Factory in conjunction with IFC

From a biography of one of history’s most revered inventors, to a sci-fi thriller about an alien parasite, to the inspiring true story of the female spies who fought against the Nazi occupation of France, and a tense tale of a couple trapped by a terrible storm, Shout! Factory, in conjunction with IFC, brings something for all movies lovers this February. Tesla will be released on Blu-ray and DVD Feburary, 2, 2021, Sputnik February 9, 2021, A Call to Spy February 16, 2021, and Centigrade on February 23, 2021. Fans of these films can pre-order their copies now on ShoutFactory.com 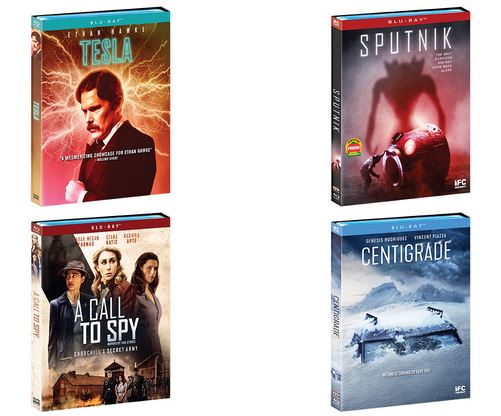 In Tesla, brilliant, visionary Nikola Tesla (Ethan Hawke, Training Day) fights an uphill battle to bring his revolutionary electrical system to fruition, then faces even thornier challenges with his new system for worldwide wireless energy. Tesla’s uneasy interactions with his fellow inventor Thomas Edison (Kyle MacLachlan, Twin Peaks) and his patron George Westinghouse (Jim Gaffigan) are in sharp contrast to his sidewinding appeal to financial titan J.P. Morgan (Donnie Keshawarz). Meanwhile, Morgan’s daughter Anne (Eve Hewson) takes a more than casual interest in the inventor. Anne analyzes and presents Tesla’s story as it unfolds, offering a distinctly modern voice to this exhilarating, offbeat drama which, like its subject, defies convention. This release will be available February 2, 2021, and will also include a making-of featurette as a bonus feature.
Due to her controversial methods, Tatiana (Oksana Akinshina), a young doctor, is on the precipice of losing her medical license in Sputnik. Her career may not be over, though. After she’s recruited by the military, she is brought to a secure science research facility to assess a very special case, that of a cosmonaut who survived a mysterious space accident and has returned to Earth with a unique condition: there’s something living inside of him that only shows itself late at night. The military has nefarious plans for it. Tatiana wants to stop it from killing. And the creature itself thrives on destruction.
Combining the palpable fear of the unknown with the horror of bodily invasion, this hair-raising thriller turns the interstellar terror of Alien on its head, delivering something fresh to the interplanetary monster movie canon. And with its massive scale and brutal carnage, this sci-fi gem signals the arrival of a major new voice: first-time director Egor Abramenko. Sputnik will be available February 9, 2021.
“An important, compelling story that had to be told” raves Andy Howell of Film Threat about A Call to Spy. As Great Britain’s forces were stretched thin during World War II, Winston Churchill’s Special Operations Executive began to enlist women as spies. Their daunting mission: conduct sabotage and build a resistance. Spymistress Vera Atkins, later the inspiration for Ian Fleming’s Miss Moneypenny in the James Bond franchise, was the chief recruiter for this secret army. Atkins selected two unusual candidates: Virginia Hall, an American journalist from Baltimore with a wooden leg, and Noor Inayat Khan, a wireless officer of Indian descent and an avowed pacifist. Together, they worked to undermine the Nazi regime in France. The courage, sacrifices and grit of these three women helped quell the Nazi occupation – and ultimately turned the tide of the war. A Call to Spy  also includes a behind the scenes featurette as a bonus feature, and will be available February 16, 2021.
Robert Daniels of Polygon calls Centigrade “a creatively crafted claustrophobic study of a fractured marriage.” Inspired by real events, this harrowing film follows a young American couple, Matt and Naomi, as they travel through the Arctic mountains of Norway. After pulling over during a snowstorm, they wake up trapped in their SUV, buried underneath layers of snow and ice. As if the stakes aren’t high enough for the pair, Naomi is eight months pregnant as they contemplate how to escape their frozen prison.
With few resources, a dwindling food supply, and nothing but time, the couple endure mounting tension, blame, and personal secrets bubbling to the surface. Matt and Naomi realize they must work together to survive in a crippling battle against the elements, hypothermia, disturbing hallucinations, and plunging temperatures reaching far below zero. Will they make it out of this alive? Centigrade will be available February 23, 2021.
Share