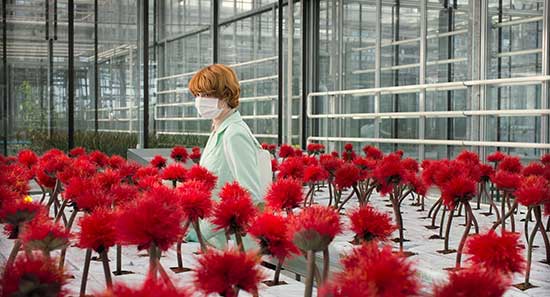 Sweden’s leading streaming service for arthouse cinema launches an initiative to coax audiences back into theatres in a unique collaboration with the country’s cinemas, as they prepare to re-open after months-long closures. Starting today, Draken Film subscribers will have access to the opening weekend screenings of a hand-picked selection of new releases as part of their monthly subscription offer. Several titles will be included every month, starting with Jessica Hausner’s acclaimed Little Joe, set to open on the 28th of August. Draken Film will also be distributing titles itself, among them the five-time Amanda-award nominee Disco by Jorunn Myklebust Syversen, marking their entry into the theatrical distribution market.

– We are in a crucial position for the film industry as we know it. That means we have to dare to rethink traditional distribution models and the relationship between streaming and theatrical. We are convinced that cooperation will be key in the future, especially for art house cinema, which for several years has struggled in the Swedish cinema market. With a cross-window subscription model, we want to encourage the audience to return to the cinemas again in a safe way, and also see really good films, says Jonas Holmberg, artistic director, Göteborg Film Festival.

The selection of current cinema releases is made by Göteborg Film Festival’s and Draken Film’s combined programming teams. Subscribers will have access to opening weekend screenings in local cinemas across the country, from Malmö in the south, to Luleå up north. The idea is to incite cinema-goers to attend screenings more often and to encourage risk-taking in their choice of films, whilst securing some important income for cinemas during the challenging months ahead. Sweden’s top arthouse distributors, such as Nonstop Entertainment and Folkets Bio, and an initial thirty cinemas are currently signed up to the initiative.

– The exhibition sector has been hit especially hard by the corona crisis. New safety regulations and restrictions pose big challenges, and the postponement of release dates makes it tough for films to reach their audiences. By inciting audiences to attend screenings during a film’s opening weekend, which is so crucial to its cinema career, we bolster both the cinemas, as well as the films themselves, increasing their chances to reach a wider audience and prolonging their cinema exposures, says Olle Agebro, Head of Acquisitions at Draken Film.

Draken Film is an award winning streaming service run by Göteborg Film Festival. Draken Film launched an initiative to support independent cinemas in March, donating half of its revenues to local cinemas chosen by Draken Film subscribers. Several of these being non-profits, the initiative had a significant financial impact, especially for those cinemas whose audiences expressed the most support.

Other theatrical titles so far included in the initiative, except Little Joe and Disco, are Swedish documentary Meanwhile on Earth by Carl Olsson and Josephine Decker‘s award-winning Shirley starring Elisabeth Moss.