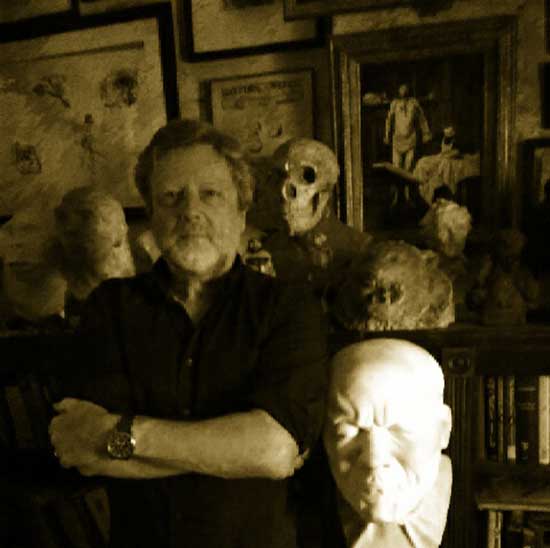 HNN- Hi John, thank you so much for taking the time to do an interview with Horrornews.net Please tell us about the collection of horror stories you wrote, The Dark Walk Forward?

John- Thank you for giving me the chance to talk about the book, Janel. The stories are a collection of my work going back to 1983, when my first attempt at fiction, a tale called One Happy Family, appeared in The Twilight Zone Magazine. Most of the stories are my so-called Ste. Odile stories, set in a fictional town based on the actual old French colonial town on the Mississippi called Ste. Genevieve, to which my family has a centuries-old connection. But not all the stories are Ste. Odile stories. I have always wanted to explore elements of horror in the daily lives of outcasts, isolated, perhaps self-loathing individuals whose existences were already difficult before the appearance of horrific elements. These individuals range from Francisco Goya to a 19th century Japanese fisherman to a mysterious wild woman who was captured in the Caucasus Mountains in the 1850s.

HNN- Did you always know that you wanted to be a writer?

John- Pretty much. I remember trying to write a novel about Hercules when I was eight or nine. Storytelling is a great Celtic tradition and was an important element of my family history. Storytelling and the love of words.

HNN- Have you always been a fan of horror?

John- I can’t think of a time when I wasn’t a fan of horror. The silent movie classics, the heyday of Universal horror, and the giant monster movies of the 1950’s were always my preference in film. Although I struggle with it and had to adjust to how unlike it film versions were, I read Frankenstein when I was very young. Dracula too. Filmmakers have gotten pretty close in interpreting Dracula, but they have never really done Frankenstein right. Too philosophical, too intelligent, too human, I think.

HNN- What inspired some of the stories? Were there any places that you knew of or visited for inspiration?

John- Yes. I mentioned Ste. Odile being inspired by Ste. Genevieve, but also my travels in the south and southwest will be apparent, and a trip to Europe, especially France and Alsace my wife and I took two years ago. We were blown away to find there is a REAL Ste. Odile, a mountaintop pilgrimage retreat in Alsace, so of course we visited it. I couldn’t believe it. I just made the name up when I started writing the stories! 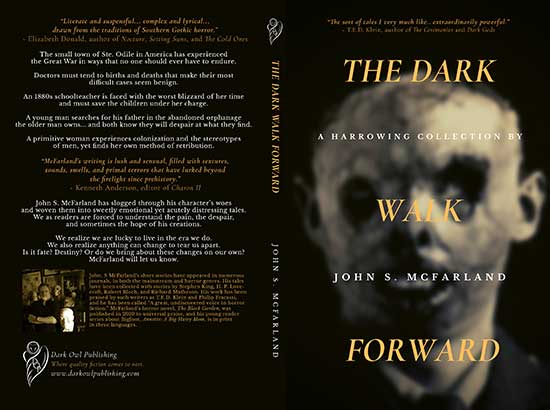 HNN- What would you like to say to the people who will reading The Dark Walk Forward?

John- First and foremost, thank you!  I also want to emphasize that this is mostly the horror of isolation, of abandonment and self-contempt. These are not bloodbaths or slasher stories or assault on the senses tales. They are more subtle and understated…more horrific realizations of what reality can include rather than hitting you over the head with gore.

HNN- Do you have a favorite author/writer?

John- So many. I love the 19th century masters. Their influence will be obvious to many readers of my book. I mentioned Mary Shelley’s Frankenstein and Stoker’s Dracula, but I LOVE the ghost stories of Joseph Sheridan LeFanu and M.R. James. Also, Oliver Onions and Robert Hitchens. Have to include H. P. Lovecraft, of course, POE of course, Arthur Machen, F. Marion Crawford, Ramsey Campbell, T. E. D. Klein and Nicole Cushing. Aside from horror though, I keep coming back to William Faulkner, Flannery O’Connor and James Joyce of Dubliners. Always so much to learn from these three.

HNN- Do you have any other projects that you are working on? Or, any projects in the works that you can share?

John- Yes. My new publisher, Dark Owl Publishing has been a great boon for me. There is talk of re-issuing my 2010 historical horror epic The Black Garden, and its sequel, which is in the works, Azmiel’s Daughter. DOP is also looking to re-issue my young reader novels about Bigfoot, Annette: A Big, Hairy Mom, and Anette: A Big, Hairy Grandma, both out of print in English but still in print in Croatian and Slovenian! I am also working on what I hope to be a classic ghost story novel called Phrygia House, and possibly a vampire story set among miners during the Great Depression called The Plank Road.