Previously the Los Angeles based BOOBS & BLOOD film festival has given back to the community by fundraising for THE BREASTED FOUNDATION through its festival and magazine, but now it’s giving back to its festival filmmakers as it launches its first DVD and Digital Distribution division. Under the banner name B&B, the company will be, as highlighted by Festival and now Distribution President, Miles Flanagan, “Distributing work that’s female driven and from underrepresented groups and countries around the world.” 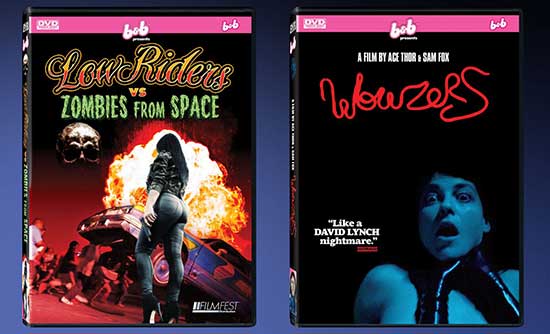 “Particularly during a pandemic, film festivals have to re-invent themselves to some degree and I feel offer much more to filmmakers,” states Flanagan “And offering distribution is a game-changer for many. We want B&B to be not only a great filmmaker friendly festival, but also a place where filmmakers can get their work actually distributed by people they trust.”

The brainchild of both veteran FILMFEST distributor, Nadav Street and Miles Flanagan, B&B has already a slate of 10 features for the first half of the year, from across the globe and all with DVD releases. “Who doesn’t want to see their movie as a hard copy DVD. We offer this service to all our filmmakers,“ states Nadav Streett.

The first 2 films out of the block are the festival favorites “WOWZERS” and “LOWRIDERS vs ZOMBIES FROM HELL.” “The titles alone made both these films no-brainers for us to release,” adds Flanagan.

SAM FOX: “”We wanted to make a very stylized film which can be interpreted differently depending on the audience’s personal afflicts. A lot of people make shorts and then shelve them after one or two festivals. I am immensely proud and grateful for the team that made this DVD possible.”

The 2nd release, the outrageously title, “LOW RIDERS vs ZOMBIES FROM SPACE” was made in San Antonio by an almost exclusively Latino cast and crew. “Latino filmmaking, and particularly Latino horror is grossly underrepresented in the market place today. We saw this as a great opportunity to show a truly fun, outlandish and wild movie,” says Flanagan. “One made by an entire community, and one that also explored horror from the unique perspective of Lowrider culture. It’s our way of redressing this imbalance and exposing audiences to truly exciting work they’d normally never see.”

Producer, Writer & Director DAVID F. MENDEZ: DAVID F. MENDEZ: “The film took me about a year to complete and only because halfway during the filming we got hit really bad that year with hurricane Harvey. Most of the inspiration came from films I grew up watching like Machete, Army of Darkness, and all of the other 80s and 90s slasher and horror films of the day. Having it distributed on DVD is a dream come true a positive affirmation of all our hard work, sleepless nights and headaches.”

“We’re working very closely with all our filmmakers and are excited about the films we’ll be releasing in the coming months. Films from as afar afield as the US, Mexico and Brazil,” states Streett.

“It’s one thing to give out awards, and encouragement at festivals,” continues Flanagan. “It’s another to actually step up and release these great films and get filmmakers on the first steps toward a career in the industry.”

Both “WOWZERS” and “LOWRIDERS vs ZOMBIES” DVDs are available now on AMAZON.