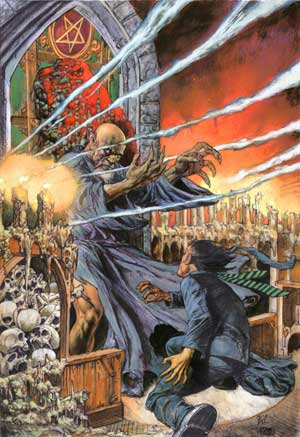 “Church of Hell” is one of those titles that lets you know right up front what to expect and to what audiences it will appeal to. My first introduction to this rather bad ass series is issue #2. Issue #2 picks up as Dominic Raggar is in mid confession to father (didn’t catch his name?) As it continues, it quickly gets into the pain and suffering pretty quick with some brilliantly gory stills. segued into a nightmare of reality and delusions….. Dom is pretty sure this isn’t what he signed up for.

The preacher continues to instruct him of his past crimes and regrets along with a history of mankind’s demon folly. Beaten to a pulp, dragged to prison and returned in an instant to his present state it’s hard pressed separating what’s real and what’s not. Though the intention is clear. He can lead a life of hell on earth or work for the demons and inflict hell on earth. While each is far from a choice decision it only means this series is ready to ramp up in some serious ways. I love the concept and would love to see this one day become a film. You never know right?

This series demands attention that I’ll be keeping tabs on. The concepts are well planted into the horror-meets-hell genre of reads and looks to be a pretty thoughtful but brutal ride into the writer’s interpretation of all things evil. Of course the artwork backs up the product with the talents of Wayne Nichols and killer cover arts by Simon Bisley and Glenn Fabry. The writer needs no introduction, Alan Grant who nails the idea on the head. Though to be fair …..I’m gonna hold out for the collected TPB so I can get the series inone fell swoop. Highly recommended for horror cats and nightmare loving minions.

Check out other books at: Berserker Comics 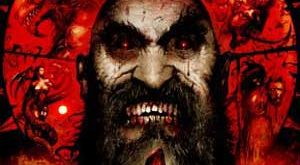