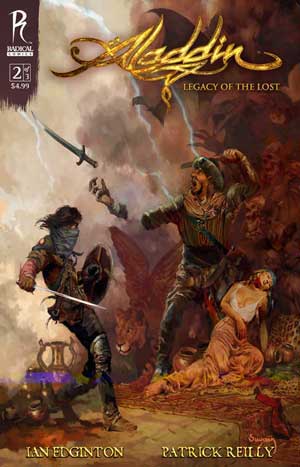 Fans of monsters, mystery, old world and the fantastical will love this series. I’m actually reviewing midway per issue #2 of 3 in this release from the artistic talents of Radical Comics.

The issue is beautiful and painted with a high sense of style and finesse. Aladin is the new boy in town (or Prince) who parades down the streets throwing about riches to the poor folks of the village. The king, a greedy but kind ruler insists his daughter Soraya meet this Aladin in hopes of gaining Aladin’s wealth in the process.

The princess though is no toy to suitors and without cause rejects Aladin from the start. Though its Aladin’s charming ways that surprise and intrigue the princess even though she holds her distance. When an evil sage and seer named Qassim alerts the king that Aladin is just a thief, he tries to sway the kings view so he can overtake the palace. This causes transformation thru magic, the kidnapping of the princess and the death of the king and his men.

Essentially this sets off a hunt for Aladin to rescue Soraya. His quest though is aided by Sinbad who is bored and needs a new adventure. The quest begins with a visit to the underground to receive the advice of the Mantis Queen, a magical and deadly queen who grants wishes at the costs of life years. And so the journey begins. Aladin and Sinbad set off at great peril battling dark forces in an effort to locate the princess.

I found the tale both entertaining and well written. Any story that is hard to put down is a keeper in my book. It has all the charm of old Sinbad tales which filled the screen with strange encounters, plotlines and fantastical elements.

Look for issue #3 as well as the previous issue #1 for the complete voyage. Special kudus go out to artists of this fine piece Patrick Reilly & Stjepan Sejic. With killer cover art by Arthur Suydam. Most of all the adventure soaked writing of Ian Edginton. The issue is also available in 2 different cover variations.

Tags Aladin: Legacy of the Lost