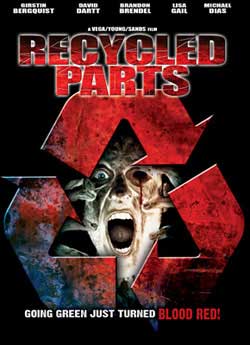 On a Friday night, five college friends cruise downtown looking for a popular nightclub. Momentarily distracted, their driver mows down a pregnant woman. The panicked kids contemplate ditching the scene until a strange doctor arrives to offer his assistance. The frightened kids enter his bizarre office and end up trapped in a macabre underworld where body parts are extracted from unsuspecting victims and sold to the highest bidder. Will they escape this horrible nightmare or are they the next to become RECYCLED PARTS?

QUICK FIX:
It’s Friday night and a group of college schmucks are cruisin’ the downtown streets of Hell-A, chasin’ some love, trying to score a totally rad party and then…the driver starts arguing with another in the car and runs over a pregnant chick.  Oh yeah, that’s right (insert shock value scene here)

a pregnant chick – SPLAT, just like that.  Do they immediately call the cops?  Aw hell naw, Uncle Phil – in the midst of their mild meltdowns, a Batsh*t crazy dude who would look and act like the illegitimate love child of Doc Brown from BACK TO THE FUTURE and Milo from UHF bursts onto the scene outta nowhere like Lil Jon in any rap video filmed in the last five years, claims to be a doctor, and has the kids whisk the flattened pregnant chick away to his dingy “operating room” for him.

Oh, and then the morons decide to wash the blood off their car to get rid of the evidence, but instead wind up playing puff-puff-give with a joint and making out like it was the end of the world in a Christy Canyon flick, which leads to them to being very easily captured and subdued by the fake doctor and soon find themselves smack dab in the middle of an organ harvesting ring.  Sounds exciting, doesn’t it?  You think it does?  What in the blue hell is wrong with you then???

RAMBLINGS:
Ask anyone who knows me or has read my reviews (Hi Mom!  Hi Nic!!), or for that matter most of the folks out there that I’ve written reviews for, and they’ll tell you one thing plain and simple – I am the indie filmmaker’s best friend when it comes to writing reviews.  The main reason I think being is that I am one myself whenever I have some free time, which these days ain’t much.  So therefore I will look way beyond things that a lack of budget causes one to have to sometimes settle with due to time and money.

But the one thing that makes me like most indie horror flicks, at least with most of the ones I’ve been fortunate enough to see in the last few years, is that there’s almost always a cool story in there somewhere.  As a writer myself, that’s the saving grace in a flick that can drag it back up from sh*t to very entertaining very quickly.  I’ll forgive bad acting, bad lighting, bad dubbing, bad FX, and even no nudity sometimes, but goddammit you gotta give me a story and at least one character I can get behind.  I can’t begin to tell you how much this flick pissed me off in so many different ways…

…but I’m gonna give it a shot anyway.  For as much as I criticized LONG PIG a few months ago for being overly whiney, overly preachy, overly stupid, and overly pointless, this flick actually makes that one look like REAR WINDOW in comparison now.  The characters are all morons, and the only thing that kept me from hitting the fast-forward button constantly was the fact that I was embroiled so deeply in hating every single one of them that I was crushing my empty beer bottles with my bare hands from clenching my fists in unbearable anticipation just waiting for another one of the constantly crying, whining, idiotic emo f*cktards to die horribly.

And seriously, dude…three f*cking directors and still nothing got done right or with a single ounce of originality??!!  I can’t even fathom that idea, much less accept it.  Was it all a ploy to get all of us reviewers to not know who to blame for this f*ck-up-on-wheels?  I’m thinking…yeah – point the finger at one and he points the finger at the other two, then they reverse the finger pointing, and from there just lather, rinse, repeat as needed.  Sure, too many cooks can spoil the kitchen, but too many directors on a sh*tty movie just makes for an unbreakable alibis.  Maybe they’re smarter than I thought??

If you’re a glutton for punishment or just want to kill a few more brain cells before getting carted away to the big white rubber room in the friendly self-hugging jacket, then by all means give RECYCLED PARTS a shot.  Me?  I say avoid this flick like a hooker with back hair.  This movie was a total waste of my f*cking time, and is now going into the “target practice” pile along with STAN HELSING and anything starring Paul Walker.