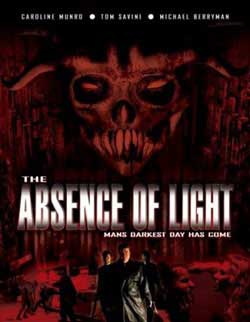 When a scientist’s ingenious discovery becomes the object of desire for two shadowy organizations hell-bent on destruction, the future of mankind hangs in the balance. Now, it’s up to two burned-out assassins, Puritan (Richard Conant) and Sultan (Eric Thornsberry), to protect the scientist and keep his project from falling into the wrong hands.

When high profile political figures will pay great sums to reassure a smooth election victory, they will go to great means to make sure that no forms of blackmail will get in their way. As true in the case of Patrick Desmond’s The Absence of Light, two underground organizations fight a futuristic battle that overlaps the outcome of an election of a historically troubled Senator.

The two organizations are quickly introduced as the terrorist organization (The Plague) and the protector of high profile people (Division 8.) The Plague is headed by Whiplash (David Hess), and Division 8 is lead by Higher Power (Tom Savini.) A scene is shown at the beginning of the movie by taking out a woman working for Senator Criswell in a Camaro with machine guns and motorcycles, which gives the movie it’s theme of gang related hits throughout the film.

Senator Criswell is introduced as a politician that can not keep his pants up. His affairs have leaded a life of paying Division 8 hit men to take out the causes of blackmail attempts. Criswell meets with Division 8 hit man Puritan (Richard Conant), and he discusses arrangements to find the video tape in which he is being blackmailed from for a hefty price of $300,000. Puritan is a nearly retired hit man, who wants to secure his retirement with this last job. He also wants to get his girlfriend back, whom he had to let go to protect her from his unsafe lifestyle.

Puritan is accompanied by partner Sultan (Eric Thornsberry) while ensuring the election of Criswell will go smoothly. They find the owner of the blackmail tape, Charles Luggins(Andy Halter, and quickly hunt him down while retrieving the tape. Whiplash is angered by how easily Puritan discovers Plague members, and immediately sends more Plague artillery after Puritan and Sultan. The Plague is easily defeated, and retreat against the successful Division 8 members.

Higher Power is also bothered by news from staff members Abbey (Caroline Munro) and Jezebel (Rebekah Gardner), that The Plague is going to great depths to make sure Criswell doesn’t get reelected. Whiplash sends the woman in the sex tape, whom is pregnant with Criswell’s child, to work and cause more problems for Criswell. Luckily, Puritan and sadistic Fetish (Mark Cullison) take care of the problem with a forced abortion.

Puritan finds that he has problems with mixed thoughts of anguish and bad nightmares, which are brought out by Division 8’s The Seer (Michael Berryman). The Seer’s philosophical insight haunts Puritan, and puts him more into a dreamlike state of confusion. Puritan is set on his job though, and next tries to find the owner of newly developed “Devour” software that can trace every move of any human being on the face of the Earth. Jezebel and team Puritan/Sultan conclude that The Plague’s Jenkins (Kevin Van Hentenryck) is the owner of the software, and Puritan and Fetish quickly take care of the problem.

Whiplash orders more hits that are demolished by strategic moves by Division 8, which leads to the last chance of defeating Criswell with genetically new soldiers that are made from splicing together DNA from animals and humans. This project called “Prometheus” was developed by the plague, and has creatures that are known to grow seven feet in height. After Puritan and Sultan are sent to the research facility, their fight to stay alive and save Criswell’s reelection is at hand while having to fight the adult forms of these half human/half animal monsters plus Plague members.

This Action/Drama/Horror flick is filled with plenty of fighting and sequences of excitement that helped keep the story alive. The explosions and creatures were heavily created by CGI elements, and hindered the realistic believability of the movie. The plot of a Senator going to great lengths to cover up his troubled behaviors is something that is seen in reality, but is usually brought out by mass media destroying the career of the politician.

Patrick Desmond’s The Absence of Light pulls all the cards of a troubled politician whom will go at great lengths to get reelected through the power of covering up mistakes through money. With action-packed showdowns between two shady criminal organizations, the fight to save a politician’s career is upheld by gang hits and fiery explosions.

Note: This movie is now available as part of the 4 pack “Alien Fear Collection” from Mill Creek Entertainment

Tags The Absence of Light