The Art of Missing Link 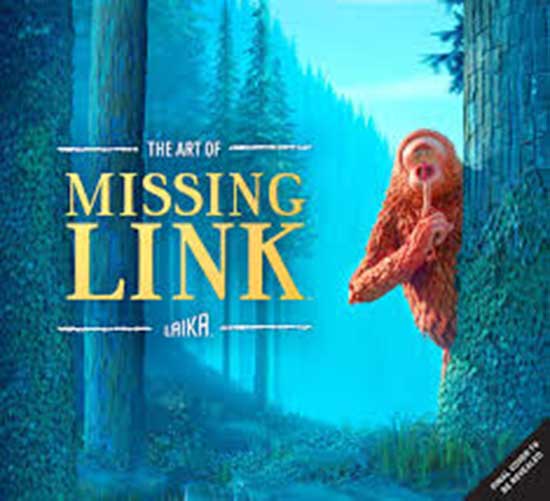 From LAIKA, the animation studio behind the Oscar-nominated Kubo and the Two Strings, get ready for Missing Link: a stunning, epic, raucous stop-motion comedy. Featuring concept art from the film’s creation—including sketches, storyboards, character designs, and much more—illuminated by in-depth interviews with the film’s creative team, The Art of Missing Link (April 16, 2019 / $45.00) is a must-have companion to the film.

Hugh Jackman is Sir Lionel frost: a brave and dashing adventurer who considers himself to be the world’s foremost investigator of myths and monsters. The trouble is, no one else seems to agree. He sees a chance to prove himself by traveling to America’s Pacific Northwest to discover the world’s most legendary creature. A living remnant of Man’s primitive ancestry. The Missing Link.

Zach Galifianakis is Mr. Link: the slightly silly, surprisingly smart and soulful beast who Sir Lionel discovers. As species go, he’s as endangered as they get; he’s possibly the last of his kind, he’s lonely, and he believes that Sir Lionel is the one man alive who can help him. Together they set out on a daring quest around the world to seek out Link’s distant relatives in the fabled valley of Shangri-La.

Along with the independent and resourceful Adelina Fortnight (Zoe Saldana), who possesses the only known map to the group’s secret destination, the unlikely trio embarks on a riotous rollercoaster ride of a journey. Along the way, our fearless explorers encounter more than their fair share of peril, stalked at every turn by dastardly villains seeking to thwart their mission. Through it all, Mr. Link’s disarming charm and good-humored conviction provide the emotional and comedic foundation of this fun-filled family movie.

The Art of Missing Link is a lushly illustrated volume that goes behind the scenes of LAIKA’s new stop-motion adventure. LAIKA utilizes cutting-edge technology to advance stop-motion animation in a hybrid of old and new techniques. This book probes deep into the filmmakers’ meticulous process and showcases the one-of-a-kind artwork from the making of the film.

Ramin Zahed is the editor in chief of Animation Magazine. He has been covering the animation and visual effects world for over 20 years. His articles have also appeared in Variety, Hollywood Reporter, the Los Angeles Times, and Emmy Magazine. He is the author of numerous books on animation, including The Art of Spider-Man: Into the Spider-Verse, The Art of The Little Prince, The Art of Captain Underpants, and The Art of Rise of the Guardians.

Stephen Fry is an English actor, screenwriter, author, playwright, journalist, poet, comedian, television presenter, film director, and all-around world treasure. Fry has written and presented several documentary series, contributed columns and articles for newspapers and magazines, appeared frequently on the radio, read for voice-overs, and written four novels and three volumes of autobiography: Moab Is My Washpot, The Fry Chronicles, and his latest, More Fool Me.

Chris Butler has been a leading creative force at LAIKA for more than a decade. He made his writer-director debut with ParaNorman (2012), and Missing Link marks his return as both writer and director. His work has been nominated for an Academy Award, a BAFTA, several Annies, and a GLAAD award—the first GLAAD nomination for an animated feature.

Tags THE ART OF MISSING LINK