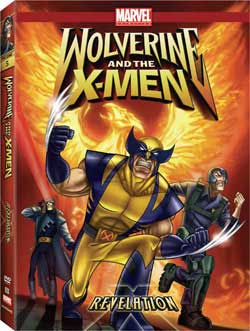 The world’s end arrives in eight days. Will WOLVERINE and the X-MEN discover the deadly secret to stop it? Uncover the truth in WOLVERINE AND THE X-MEN VOLUME 5: REVELATION with five gripping episodes. As the X-Men face a threat lurking in their midst, ANGEL goes against his own father to save fellow mutants. But when his wings are taken from him, will he throw away everything for revenge? Next, dangerous secrets await SCOTT in the depths of his own mind when he attempts to rid himself of his memories of JEAN GREY. Meanwhile in the future, XAVIER struggles at all costs to get information back to Wolverine, even at the risk of ROVER and MARROW’s loyalty. He must act quickly, before GAMBIT succeeds in his treacherous game of thievery. Because if he doesn’t, a power more deadly than anything the X-Men have ever faced will put the world at risk: a fiery entity known as…THE PHOENIX.

More from the dynamic heroes we all know and love comes another edition release. This collection is called “Revelation” and features 5 more exciting episodes. This DVD release is volume 5 from the series.

In “Guardian Angel”, Angel goes up against his father who wants to release a cure for mutants to turn them into ….well, normal humans. This of course creates a problem for those who are just fine with their enhanced abilities ….including our hero team X-men. Though when Angel agree’s to confront his father alone, he is attacked by the MRD and removed of his wings per surgery. Waking up to find his missing limbs, ….or wings for that matter, Angel goes into depression with the realization that he’ll never be able to fly again. This is when Sinister steps in to offer him his powers backs. When Angel agree’s, he wakes to find his new wings but also at the price of being transformed into one of Sinister’s creations now. Now known as “Arch Angel”, it appears that he is now closer to a villain than the hero he was.

“Breakdown” primarily focuses on Cyclops and his inability to cope with the loss of Jean Grey. Emma Frost offers to rid him of her memory so that he can continue supporting the team rather than living in depression. Cyclops agrees while Emma reads thru his mind to find early thoughts of Jean to erase. It’s through this method that we learn alot of Cyclops back story. From the original inception of the X-men, to the first meeting of Jean Grey and further bouts against Magneto.

“Rover” is a bit of the odd one of the bunch, that has the X-men jumping forward again to a post world version. A new character called Marrow is introduced who sports a spiky protruding collection of …spikes. She has developed a puppy like relationship with her trusty robot she calls Rover. Though the professor and his band of heroes discover that Jean Grey may be the sole reason for the apocalypse when his team is gathered for a mission to discover details about Master-mold, Wolverine and the Phoenix legacy.

The 2 remaining episodes include “Aces & Eights” with “Shades of Grey”. We get a few surprises from Gambit and some tasty face-offs. In addition, the Jean Grey drama plays out even more when she wakes up in a hospital with Amnesia.

The collection provides some of the highlight episodes, but it also might confuse a few viewers who are looking for continuity. Each skips around a bit leaving the set of 5 not really cohesive as a follow thru set. You best bet is to tackle on each like the single episodes that they are without need for sequels. The animation is appropriate, and at times more geared to adults than children. I really enjoy the constant inclusion of new characters and villains.

The volume spans a nice 110 minutes for collectors who don’t want to wait for the inevitable box collection. Though its safe to say that the series will release in this fashion until that time comes. In any regards, its still good hero action and I for one love anything with the X-men label on it.