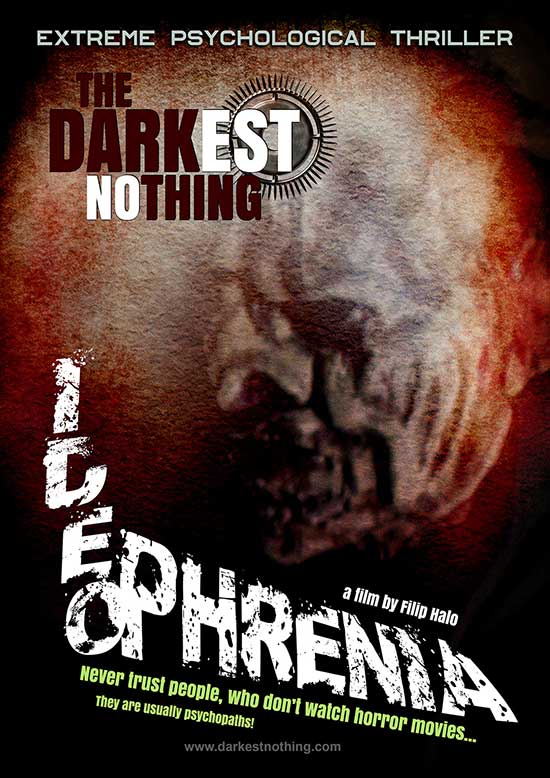 A movie project always has limitations, budget, length, ideas… What if a film series didn’t stuck to the “recipe” of the first successful movie for the sequels, and instead would bring 8 movies out all at once, or more than 12 hours of film? What if the ideas and the subjects were so complex and scary, but at the same time would educate viewers about the real dangers of our times and would dig deep into psychology to explain them in full detail?

That film series is titled THE DARKEST NOTHING. When we first started, I knew I wanted to create sequels and prequels, but I hate that form. I want to tell a complex story from the beginning to an end, but not being limited by the characters or the style of the first movie. Partly based on real stories and events, these 8 movies explore the darkest corners of the world, the last taboos, even things that most people ignore, apart from the few ones, that practice them. Modern cannibalism, extreme BDSM, the COPINE scale of pedophilia, vigilante hunters, trolling, snuff, chemical drugs, rituals, obsession with morbidity, red rooms, uncaught serial killers… Who dares to go there and explore the gruesome reality? Someone needs to, cinema is not just popcorn fantasy crap… 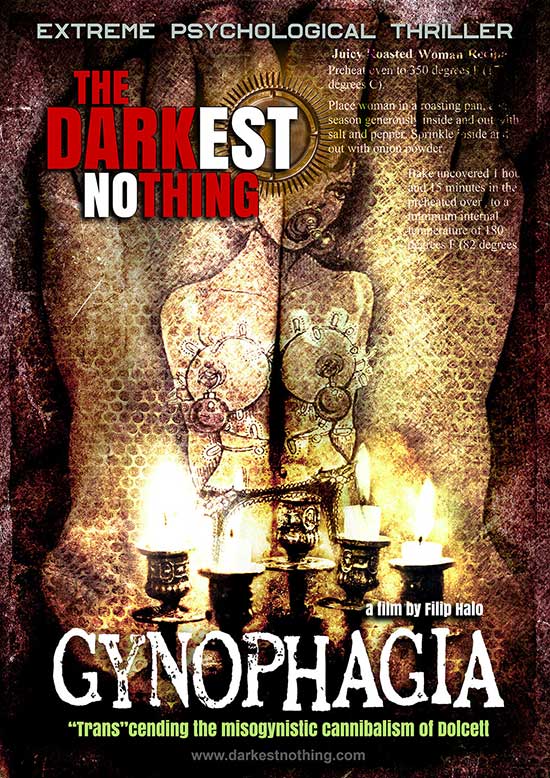 The second chapter GYNOPHAGIA finds William in a dilemma, as he receives an offer for creating a cannibalistic video, from a rich guy, who has viewed a Dolcett type of ritual at a screening in his own mansion. William starts by investigating the comic artist Dolcett, who remains anonymous to this very day. His research brings him face to face with a different type of cannibals, related to the transsexual community. A common secret among them for years, until a trans girl decides to tell William about the sick truth and about the doctors involved in it. William decides to create the ultimate cannibalistic video, that will make everyone sick, instead of just hunting them down.

In the third chapter IDEOPHRENIA, William meets up with the horror artist simply named “Butcher”, who acts in underground slasher movies and has a fan base at horror conventions. William finds it exciting to focus on horror movies and morbidity and the magic that happens during torturing or death, as those moments hold secrets for studying the behavior or real murderers and killers. He helps Butcher with his criminal brother, who is abusing him since childhood, and finds a way to eliminate him, by putting him in one of Butcher’s movies.

I was invited at BIFFF in Belgium and presented the first teaser for the fifth chapter PARAPHRENIA to industry people and festival owners, related to horror. The reaction was significant, as all got genuinely scared, especially by the fact, that the elements inside the teaser are real and related to real videos and events. I wasn’t expecting that, especially from people, who work with gore and horror all the time. There is a key in the style of this film series, that makes it unique and different, the fact that it’s not a fantasy, it’s not just movies. The Darkest Nothing shows the truth about the human mind and doesn’t hold back. It accepts reality as it is and presents it in a raw unfiltered way, without fictional names or places. These things do happen, and you cannot find most of them online, rather than on the Deep and Dark Web, if you know where to look for. Still, some of them have never been filmed or talked about, while other elements have huge followings, that most people ignore, until they type the right word on Google. Those results are unfiltered and far worse than any type of sick porn, that parents lock on their children’s computers and smartphones. Every child can find them and even become someone’s victim, if too curious.

The German fund doesn’t support this German production, as they found it too dark and expressed their fear, that a politician might react to such a decision afterwards. What does that even mean? Are they afraid that a possible pedophile might hate the exposure and the details about pedophile hunters and where to exactly locate monsters? They loved the message and the quality, but were not “able” to spend even 20.000 € for this mammoth project, while on the other hand they support zombie post-apocalyptic web series and vampire flicks. I guess those are simplistic entertaining not-that-fearful little projects in their eyes, compared to the time bomb that The Darkest Nothing is. 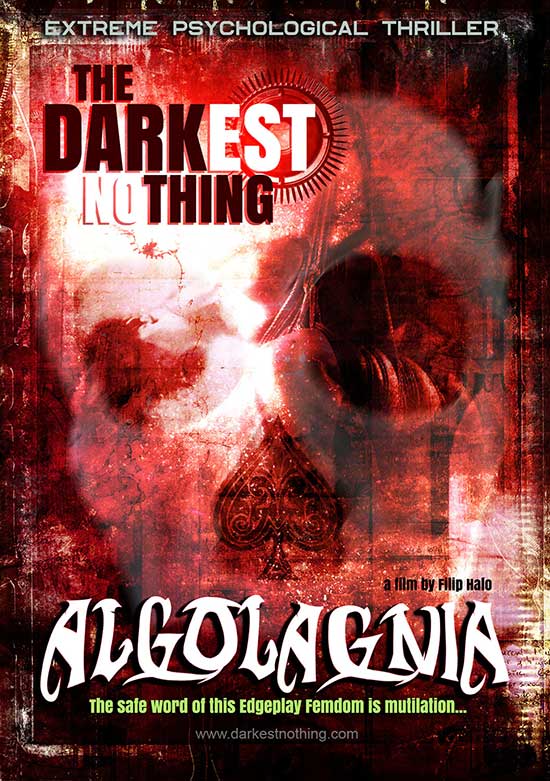 A number of producers were enthusiastic at first, like a French company, that was behind a cannibal-themed movie, a Belgian company and some individual investors. After a couple of weeks, I never hear from them again. I am guessing that the material shocks them and scares them deeply or that they are afraid to mess around with real criminals, that this project is targeting. I have also tried my best to reach Netflix, I handed them the bible of the project and the details, but never ever responded to me, not even a single NO THANKS. At least with other platforms or production companies I get an honest answer, for example CBS or FOX, that are looking for more family-friendly material or not such extreme approach to such subjects. The 8 movies together need a budget smaller than the first SAW movie to be completed, which is insane for 12 hours of 4K raw footage of psychological complicated thrillers, full with silicone special effects and a cast of over 150 good actors. I still don’t understand what scares people away, or what is the right way to go for finding the needed cash to complete it. I take any suggestion at this point, just visit the DARKEST NOTHING website or the facebook pages and feel free to suggest anything. This project needs to be completed and come out to the viewers, as it will be a milestone in horror and cinema history. I don’t care about how much money I will make out of it, as I intend to spend at least half for charities for violence against women, transgender rights and equality, children protection and pedophile hunting and education about chemical drug usage and dangers.

Check out the teaser that scared horror industry people and producers and visit the website and Facebook pages to leave any type of comment or suggestion:

Tags The Darkest Nothing 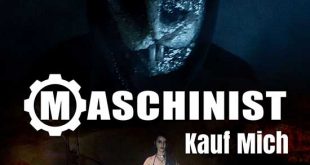 The Darkest Nothing: Paraphrenia 3 MUSIC VIDEOS from the OST