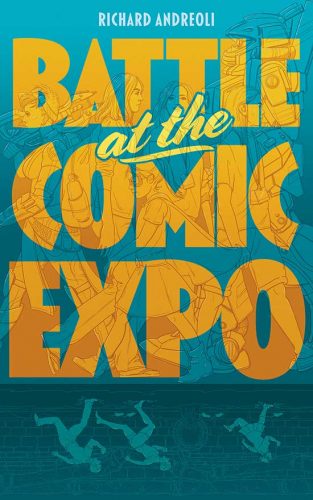 As a child, author Richard Andreoli would daydream about saving the day if a crisis broke out in real life. Those fantasies became even more acute when he started volunteering at Comic-Con in San Diego as a teenager, because who wouldn’t want to be seen as a hero in a place filled with fans of action/adventure stories, right? “But as I grew older it became clear that ‘good guys’ weren’t always pure and noble,” says the LA-based writer, “and the term ‘villain’ was in the eye of the beholder, so it seemed perfect to explore those concepts in a setting where people believed in those big ideals of heroism and protecting the innocent.”

Andreoli delivers on his youthful dream in his second book, Battle at the Comic Expo , a hilarious, oddly moving and pitch-perfect dark comedy action/thriller that captures the strange parallel universe of comics, cosplaying geeks, and obsessive fans to a tee.

The novel is currently available at any national bookstore website as well as Amazon , with the audiobook being released at the end of June through Audible. A book trailer is available at the website: www.battleatthecomicexpo.com . “From the first page, Richard Andreoli catapults you down the rabbit hole and immerses you in the crazy world of comic conventions,” says best-selling YA Fantasy novelist C.J. Abedi, who wrote the FAE Trilogy , which was optioned by filmmaker Ridley Scott. “But this isn’t simply a sardonic examination of fans; it’s a love letter to heroism and the people who believe in it most.” In Battle at the Comic Expo , an obsessed fan (the tragic but endearing Velma) with a twisted sense of reality kidnaps the most successful and arrogant man working in comics today (Ron Lionel) along with his archrival (Joe) – a failed comic book writer who is now the head of Comic Expo security.

These two unlikely allies must find a way to save themselves and stop Velma before she inadvertently kills them and destroys the largest comic book convention in the United States. To expand the story and experience beyond the novel, Andreoli also created a number of websites and social media pages for the main characters:

He also attended the The Groundlings School to broaden his comedy writing and improv skills. He has developed television and movie projects, produced stand-up comedy, written for magazines and television shows, and launched and edited multiple pop culture websites. Currently, Andreoli is the creative director for TV4 Entertainment, the global leader in OTT streaming with more than 30 genre-focused channels. In his spare time, he runs away with the circus to perform on the trapeze. For more information about Battle for the Comic Expo, visit the website and join the conversation on Facebook , Instagram and via the hashtags #BATCE #BattleAtTheComicExpo. To learn more about the multi-talented Richard Andreoli, visit his website here . For more information or to schedule an interview with Richard Andreoli, please contact Scott Busby at scottb@thebusbygroup.com