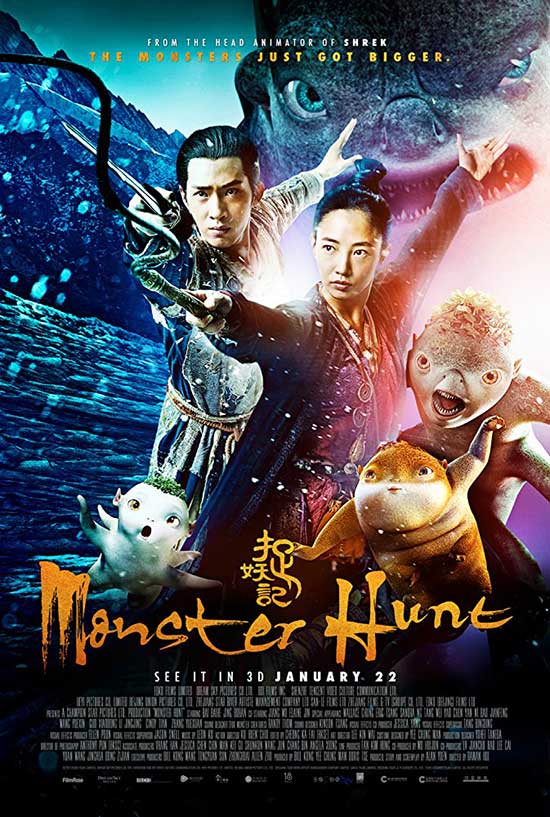 In an ancient world where monsters rule the land while humans keep to their own kingdom, a baby monster, Wuba, is born to a human father and monster queen. When mortals and creatures alike set out to capture the newborn, Wuba’s adventure begins. The cute baby monster Huba is the child of a human man and a monster queen, threatened by both monster-hating humans and monsters attempting to capture the new-born in an ancient world based on medieval China.

For a childless woman approaching 30, I sure do enjoy a lot of content intended for children. I’m not the easiest audience–in fact, I am a constant critic and often an insufferable snob—but I am putty in the hands of a well-made animated romp. (Except you, Frozen. You sit back down.)  And I tend to get pretty emotionally invested in them, moreso than I do most stuff made for adults (re: kid movies make me cry a lot). So imagine my delight when I finally got to review a family film for this site! 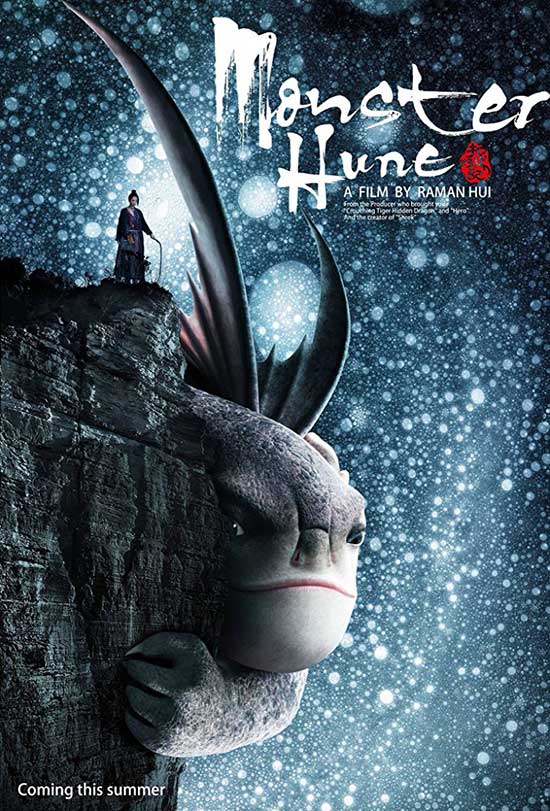 Monster Hunt takes place long ago, when man and monsters shared the same realm. But due to man’s greed and need to conquer, the monsters have been forced into a separate world where their own struggles for power begin to blow apart. Chaos erupts following the Monster King’s murder by a usurper, and surviving forces rush the pregnant Monster Queen to the only place the enemy won’t think to find her: among humans.

In the human world, Tianyin is the young mayor of a small village—despite the fact that his own relatives don’t have any respect for him. Despite being the son of a great monster hunter, one of the highest ranking in the business, Tianyin doesn’t seem to carry any of his father’s legacy—his talents lie in the softer arts, like cooking and sewing. His dull routine is upended one day when a couple of strange out-of-towners come into his humble restaurant, followed by an intense woman, Xiaolan, wearing monster-hunter badges on her jacket. The customers are revealed to be monsters in disguise carrying their queen to safety, but instead they find the inside of a hunter’s net while the Queen finds Tianyin. On the brink of death, she passes on her baby to him, begging him to keep it safe. Before he can realize what’s happening, poor Tianyin finds himself pregnant with a baby monster king. 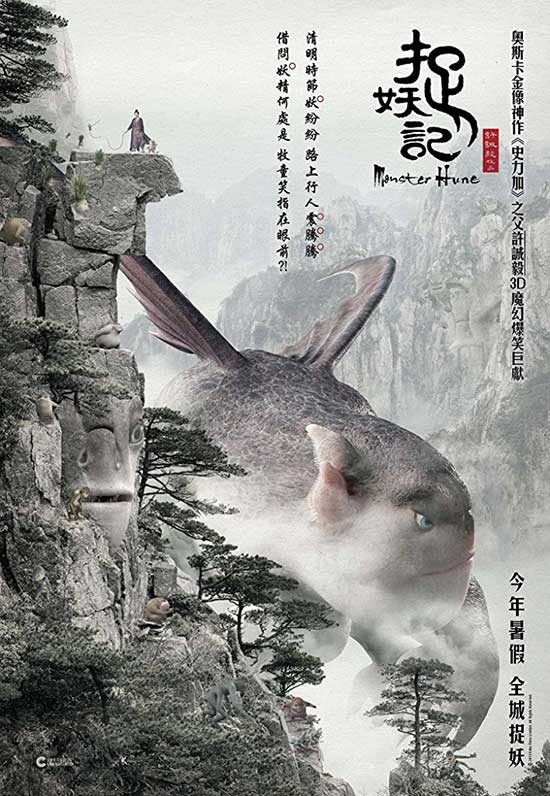 Xiaolan senses a big payday from the impending birth and drags Tianyin across the countryside to her buyer in another city. Along the way, of course, they grow fond of the baby as well as each other. All the while, monsters and monster hunters alike are at every turn on this road trip, all searching for the once-in-a-dynasty baby monster king—some to save him, some to sell him, and some to serve him as a rare delicacy.

This movie is so cute—often to a fault. The animation is good, not great, but its greatest sin is being just a little too friendly. The so-called monsters are all designed so sweetly with rounded edges and big soulful eyes that it’s hard to tell which are the “bad” monsters—they all look like something out of Ice Age or at worst, Monster Trucks. While sort of ugly at first, they do eventually grow on you, which is sort of the point when it comes to monsters anyway.

Meanwhile the human actors are instantly charming and each of them put in great performances that meet the antics of their animated costars. Despite the many twists and turns in the story, it never loses momentum without becoming exhausting, which is easy to do with such high-concept family-friendly material. About the only time things screech to a halt is during the film’s unfortunate musical numbers. They don’t happen frequently enough to call the movie a true musical, and they’re certainly not memorable enough to mine much emotion from the audience. 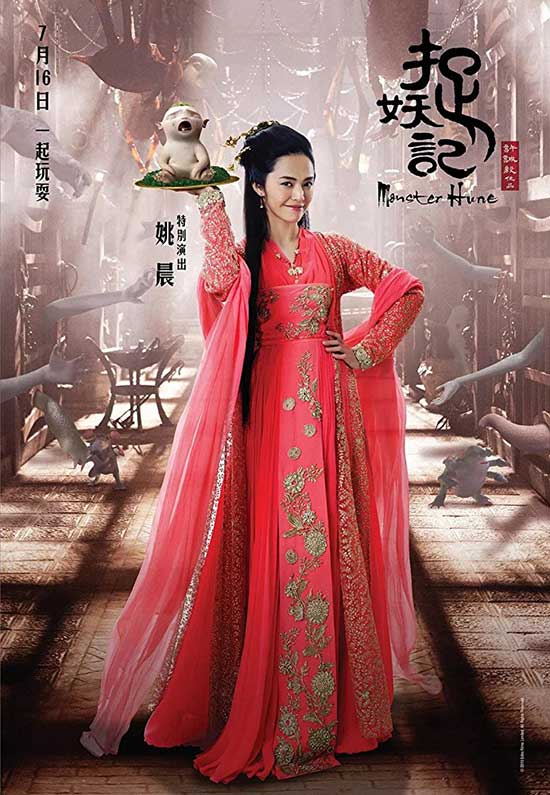 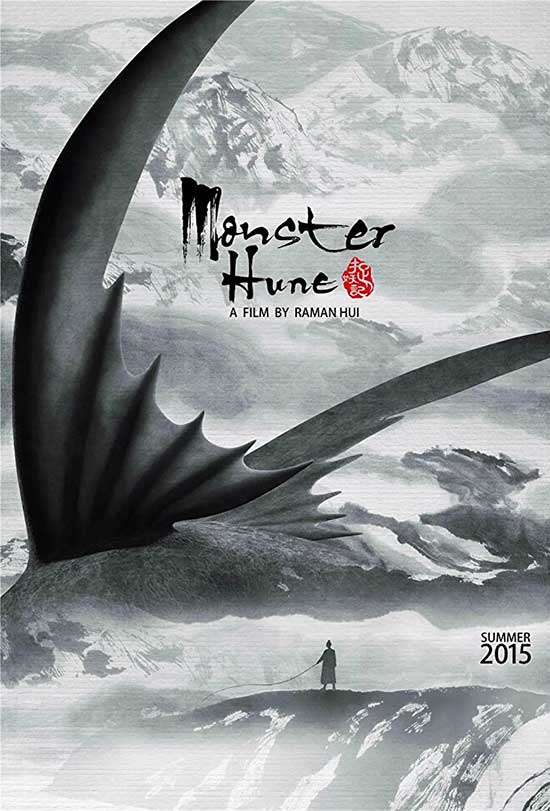 Director Raman Hui was involved with production on Shrek, and that influence certainly shows here. While not laced with pop-culture references, the humor is still pretty subversive and sometimes a little dark…plus there’s a decent amount of fart jokes thrown in for good measure. Those influences don’t bother me quite as much as the other popular American animated films Hui’s team pulled from, namely the ugly little critters that pop up to dance in the background of the musical numbers that just scream “Happy Meal toy.” Not to mention the unbearable monster dance party that happens over the credits. But again, I watch a lot of family films…I’ve come to expect these things.

Overall, Monster Hunt is a fun fantasy film that’s rarely boring and teaches a nice lesson about everyone getting along and embracing differences. I don’t review many things for Horror News.net that I would recommend you watch with your kids, but this one is a great choice for some fun family viewing (if your kids don’t mind subtitles). 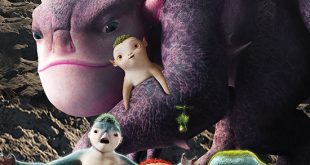