As far as horror movies go, you’ve got the classics: Nightmare on Elm Street, Scream, Dracula, Friday the 13th, maybe even the Texas Chainsaw Massacre (debatable). However, when it comes to foreign horror flicks, the countries pumping out the best movies in the horror genre right now might be deemed to be Spain and Japan.

But that may be set to change. Haunted Hotel, aka Haunted Road 2, is a Malaysian/Chinese production, set in Malaysia, and filled with an all star cast and crew from Malaysia, China, and even Thailand – known as masters in special effects production. It represents a new way of doing film that is wowing audiences across the seas.

From director Ryon Lee, this film is breaking the boundaries of what can happen when countries collaborate in movie making. A three way production in terms of countries involved, is it breaking boundaries for what is achievable when we all come together. The movie itself is spoken in Chinese, but features subtitles for Malaysian audiences.

The film is the next in the Haunted Road series, coming as the sequel to China’s 2014 release Haunted Road, however, it is a completely new story – viewers needn’t have watched the first film to enjoy the second film, with a whole new cast and storyline. Filmed in 2016, and released in 2017, Haunted Road 2, aka Haunted Hotel, marks an interesting entry in the annals of the horror movie genre. 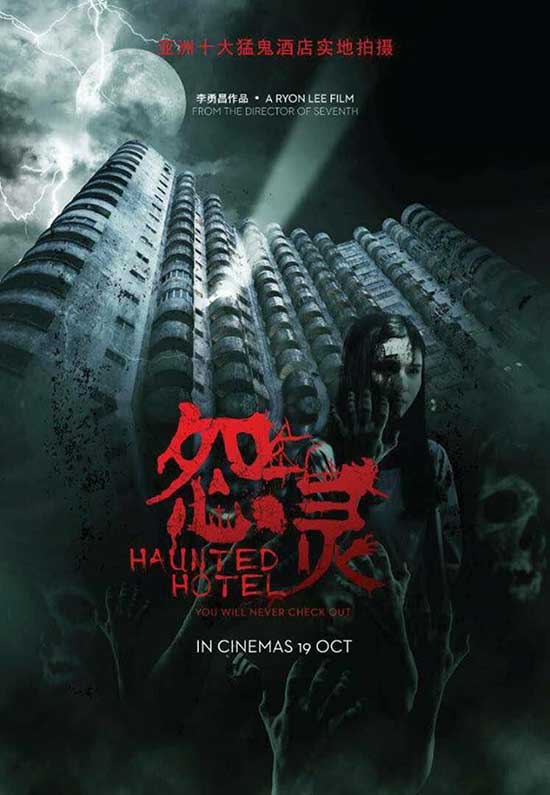 Stars in the film were chosen specifically for their crossover appeal, between both Malaysia and China, the two countries where the film saw a major theatrical release. This is despite the fact that the biggest star of the film is Aom, who is actually an A-list Thai actress. In fact, Aom had never been in a Chinese production, and has certainly never learned Mandarin, which she speaks throughout the film. Despite this, the actress managed to learn her lines off by heart, and pulls off her role with aplomb, mastering the sounds and being a truly believable (and scared!) character.

Ryon Lee is a scriptwriter and director from Malaysia, with blockbuster hits in his home country such as The Journey, and Nasi Lemak 2.0. He’s well known for being the powerhouse of film in Malaysia and decided to use the movie as a vehicle to extend Malaysia, as a tourist destination, to the world – specifically Amber Court, in the Genting Highlands. The Genting Highlands is a cool resort in the mountains, around an hour’s drive from the capital of Malaysia. The Genting Highlands is its own mini-city, complete with rides and attractions, a smattering of casinos, and some fancy hotels where you can rest your head amongst the hubbub.

The Haunted Hotel itself, Amber Court, however, is not set in the center of this glitzy city, no. It’s around 15 minutes by car from the main area – set in the midst of many abandoned buildings. The building itself is well-known for being haunted in those parts, unbeknownst to unwitting travelers to the region looking for somewhere reasonably priced to stay.

Ryon took this as inspiration for the film – to make it a haunted travel destination to attract tourists, after inspiration from the Hong Kong movie, “House That Never Die”, among others. And apparently it’s working – with Chinese tourists now heading to the hotel to experience it for themselves.

The concept for location based movies designed to drive tourism is not new. It has been employed across almost every genre and in every country of the world. Is horror tourism going to be on the rise, now?

A harrowing and deeply creepy movie, Haunted Hotel tells the tales of Ling (Leon Li Chuan from China) and Jun (that’s the Thai actress Aom or Sushar Manaying, aka Li Haina in China), boyfriend and girlfriend, travelers from China, who have come to Malaysia on a work trip. While on the trip, they decide to blow off some steam at the casino and end up winning big. Out in the Genting Highlands, they decide to spend the night at a hotel and yup – it’s total creepsville.

After the other people in the hotel start acting up and going crazy – particularly a spooky woman in a white dress, it’s up to our couple to try and make it out alive.

While China doesn’t specifically allow for ghosts or superstitious elements in film, due to regulations, supernatural elements abound. The film was changed slightly for Chinese cinemas to take this into account.

Haunted Road 2 has now achieved major success in China. The half day takings on first release for the movie came in at over $153,500USD and within a week it had raked in over ten times this amount (over 1.5mil USD). This indicates that Chinese audiences were quick to flock to the movie as a breath of fresh air in a sometimes stagnant genre.

The combination of China, Malaysia and Thailand seems to be a sure winner in this case.

Is it really haunted?

It is if you ask Alvin Chong, the 26 year old actor, hailing from Penang, who takes the role of the hotel manager in the movie. During filming of the movie, the cast stayed in the hotel itself – something which Alvin found extremely unsettling. The howling winds through the hotel, the lights flickering on and off in the hotel lift, and strange knocking noises all added up to make a very spooky experience for Alvin.

In fact, the experience has been enough to turn Alvin off horror movies for good. He promises that the Haunted Hotel will be his first and only foray into the horror genre, swearing off it for good. With a few different ghostly encounters under his belt already, the actor says he will now try and avoid them as much as possible!

What does this mean for cross-country collaboration for other movies?

This is perhaps the most interesting thing to come out of the whole Haunted Hotel project. The fact that the movie has become such a runaway success in China may well open doors to other cross-country collaborative projects in the movie space, no matter what the genre. It is true that with a clever and dedicated cast and crew, a great script, and a solid understanding of cross-cultural differences – particularly as it relates to movies – you can achieve pretty great things: as this movie is an attest to.

We certainly hope that Ryon continues in the horror genre as he has been proven to be a wicked storyteller, one that leaves us hanging on the edge of our seats. If you can get your hands on a copy of this excellent movie, then make sure you give it a watch – with the lights off of course! If not, why not watch an old classic like Nightmare on Elm Street, or head over to the this horror fans favourite site to play some spooky online slot games to while away the time. Whatever you wind up doing, we wish you a very, very creepy time…