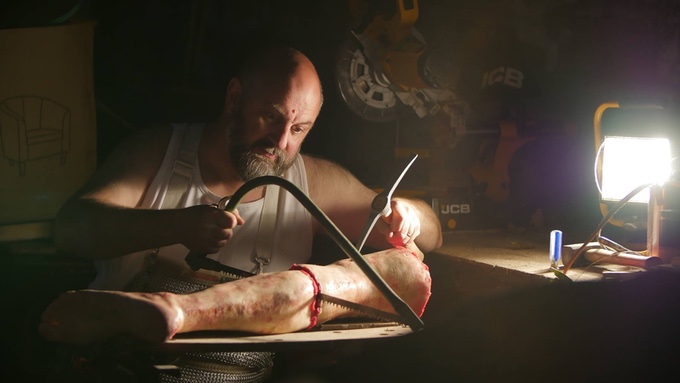 Chester Mapleforth has seceded his cul de sac from the UK, and for some terrible, awful reason the first thing that he changed was to make killing your annoying neighbours legal.. but don’t panic, every Sunday afternoon there’s a bake sale by the Village pond!
Think The Great British Bake Off meets Silence of the Lambs.
The Book Club is the first feature length film from British independent film company RedShirt Films, which focuses on six months in the lives of a community of murderers and all round terrible human beings. It’s an ambitious project stuffed with classic horror practical effects and terrible, horrible people. This film is being funded through an all or nothing Kickstarter campaign that runs until June 28th and through great levels of planning and clever design we can fund the entire production on the relatively small budget of £25,000. The Kickstarter is full to the brim with great perks and rewards, such as the opportunity to have head and body casts done for practical special effects, set visits, secret message groups, premiere tickets and of course digital rewards such as the score and access to an online screener of the film once complete.
That said, don’t think for a moment that this is a small scale production. RedShirt Films have just cast star of Primeval, Alice and Lucky Man, Andrew Lee Potts and are in conversation with several other actors from the world of British TV and Film.
Writer and director Jamie McKeller was raised on a healthy diet of Evil Dead, Bad Taste and other such sticky delights so audiences can expect nothing but the finest in disgraceful special effects and comedy splatter filled violence, as previously seen in his award winning webseries I Am Tim Helsing and short film The Final Girl, which was praised by acclaimed horror director Eli Roth.
If successful, the project will commence filming in July 2017, with a completion date of February 2018. The film will then be submitted into horror festivals and events across the world, such as Frightfest, Screamfest, Dead by Dawn and The British Horror Film Festival with the ultimate goal of seeking distribution, both physical and online.
You can follow the project at:
www.kickstarter.com/projects/369416611/the-book-club-a-film-about-terrible-awful-people
www.facebook.com/bookclubfilm
We are looking for articles, posts, shares, tweets, podcast appearances and more. Basically if there’s a way for us to reach a new group of people we will provide you with whatever you need or desire for some press. We’ve attached a couple of photos, but we are also happy to create a bespoke video for a platform if wanted. We can easily film a short video piece for your Facebook page or website that answers any questions or discusses the project.
WELCOME TO THE NEIGHBOURHOOD.
*****
RedShirt Films are a small, independent film company based in York, UK. They are responsible for long-running, webseries I Am Tim and won the Raindance Film Festival, Dailymotion Web Pilot Competition with The Book Club in 2014.
Check out our Kickstarter here – www.kickstarter.com/projects/369416611/the-book-club-a-film-about-terrible-awful-people
Subscribe to our YouTube channel – www.youtube.com/c/redshirtfilms
Share