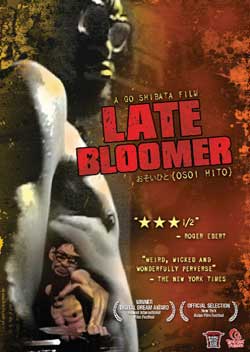 Late Bloomer is the story of Sumida-san, a severely handicapped man, and his downward spiral into hell. When we’re first introduced to him we find that despite his physical limitations – and contrary to cultural misconceptions about the handicap – he has all of the desires and personality traits of a physically normal man. Specifically: he loves to party, eat good food, and ‘rock out’ to his caregiver Take’s hardcore band. However, Sumida-san’s life begins falling apart when he develops a crush on his new occasional caregiver, Nobuko. Needless to say, the feelings are not reciprocated and when Nobuko starts spending her free time with Take, Sumida-san is driven mad with desire and frustration and things take a turn for the worse…

Late Bloomer a new B&W release from Bone House Asia / Tide point has all the makings of a showcase piece. Using a rather bizarre main actor they enlisted Sumida-san (Masakiyo Sumida) a severely handicapped older man as the film’s main focal. The purpose of this film is to introduce a horror film / thriller on a much more subtle note to viewers. Sumida-san goes through his routine in life each day as a struggle. Even speech is an issue as he uses the aid of a speech typer machine. His handicap prevents him from living a normal life and often he calls upon the aids of outside help to assist him with life’s basic tasks. Even so he makes his way around and can think intelligently. Filmed in B&W the director Gô Shibata creates a atmospheric approach sometimes using wide angle lenses and various camera positions. The film editing is kept consistent but every now and then the edits go on a tangent showing a barrage of collage footage visuals to introduce paranoia and dizziness.

Other times we are given glimpses of what’s going on in more emotional intense segments. What the filmmaker shows us is that Sumida has all the makings of a normal minded person who enjoys the same things in life as everyone else. His handicap though gets in the way and limits his ability to take advantage of everything he desires. His day includes daily visits to a handful of friends who support him , though it is apparent he lives a life of mostly loneliness in a apartment room that’s claustrophobic feeling itself.

Upon attending his friend Takes band performance, his aid Nobuko strikes up a friendship with Take. This leads to distress and bitterness on Sumida-san’s part who has a crush on Nobuko. Knowing full well his handicap cant compete with normality he goes into a depression which brews into hatred and violence. The result is a darker aspect that even a cripple can seem to orchestrate by threatening and killing off his friends. Much of that he valued becomes meaningless to him, including his small group of friends built over time.

As a result of his internal confrontation that he will never acquire the female companionship he desired, it sets off a brewing rage within his psyche that can only lead to a self destruction of his world. More interesting is the way embarks on a killing spree that itself is a symbol of renewal in his though process and how easily it becomes comfortable to him with no signs of remorse. A payback for a life of limited abilities

What is important here is the range of emotions that present themselves in the course of the film. While you cant help but feel sorry for the handicap, his future actions don’t resolve the fact that evil has let its way into his psyche. As he turns to his to aid. He announces “I will kill you”. This turning point is displayed both mentally and physically as his intellect snaps and he prepares his fragile body by re-building it for his intended attacks. He also uses all the resources available to him to commit his acts. Shibata helps move this pace along by employing a system of blurring images, perspectives, contrast, time lapses, image delays and distant shots. While times is appears hallucinatory, other times its quite beautiful.

As it plays out, the attacks seem to start from planned to random which are shown to us to prove that while Sumida is indeed a man who lived his whole life in need, he still can induce violence on others very easily handicapped or not. There is a combination of cold and darkness that is infused into your viewing much in the same way that “Henry – portrait of a Serial Killer”. What we end up with is a cinematic painting of a gray dismal environment that embellishes loneliness. 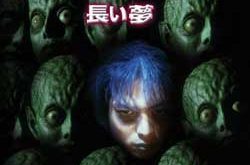