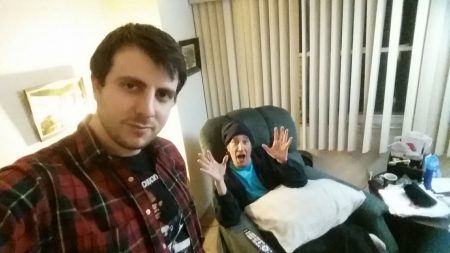 What was the first movie you remember seeing in a theater?

Jeff Frumess: The first movie I can remember seeing in the theater was 1990’s Spaced Invaders.  ​I went a few times and can even remember turning my little plastic play table on its side to recreate the marooned spaceship – reciting some of the dialogue from the ​film.

Have you always been a fan of movies?

​​Jeff Frumess: Since I could walk and talk. I remember trying to recreate Mad Max with my Legos.

When did you decide to pick up a camera and make a film yourself?

We had a family camcorder and I used to get together with friends and shoot little movies. When I was in middle school my parents got me a HI-8 Camcorder and I began shooting various family events and continued with the home movies. One in particular was a reimagining of Shakma – the Killer monkey! Gotta find that tape.

What were some of the challenges that you encountered when shooting?

Jeff Frumess: Probably the greatest challenge above all the usual ones you hear about was compromising my vision in order to finish the film. Usually a film is driven by a filmmaker’s vision: An incredible force driven by endless creativity and burning passion to fuel it. No one is going to care more about the film you’ve written than you who has written it. It drives you. It nourishes you emotionally, spiritually and yes, even physically! You are literally trying to will something into existence. Something that you thought up in your head! But filmmakers are not Gods. They are human beings and things happen, situations – Murphy’s Law. All of the gremlins, little agents of chaos come out of the wood work and throw monkey wrenches into all of your plans. And so, you are forced to make decisions. You must decide whether you are willing to compromise your vision by doing something different or an approximation of what you originally wanted…Or have nothing at all. Because if I don’t get something, then I have nothing. And there is no greater pain then having nothing when you have given everything. Romeo’s Distress was filled with these decisions over and over again. Especially regarding the third act of the movie! I had to change the whole ending. And although I love my creation to death I am always slightly irked in the back of my mind, by my original vision that’s stuck in my head. But I had to make a choice: Change my vision or lose my entire film. It was an easy choice to make. 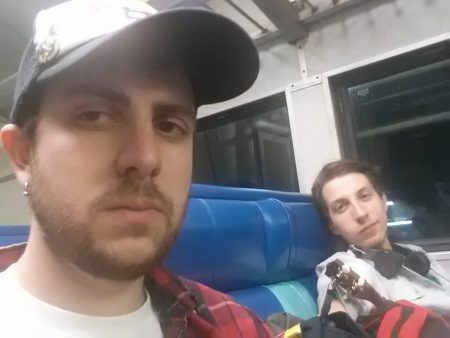 Director Jeff Frumess on the set of Romeo’s Distress

What aspect of making a film is your favorite and why?

Jeff Frumess: I really truly love it all. I went to school and learned to be a jack-of-all-trades, master of none. So I can assist in each part of the process. Eventually I get sick of whatever part of the process I am in and am eager to move onto the next. It’s a wonderful cycle. I suppose if I had to pick though, it would be when you are trying to find the next idea. Once it is found, lightning strikes, the Muses go to work and you are fueled by the passion. But waiting for it to take hold has been tough. I am trying to write every day. It’s not easy.

As far as directors go, whom do you admire and why?

Jeff Frumess: George Romero, he knows how to inject an underlying important message into his films. I could write a whole book on Night of the Living Dead. It is one of the most important films ever made.  John Waters, he showed me the demented beauty in the things that are undesirable or rejected by society and are in fact worth exploring in my storytelling.  Kevin Smith, he lit the torch and showed the way, that if you want to be a filmmaker, then make a film. And that you can make that film anywhere, and about anything.  Lloyd Kaufman, he’s another filmmaker who has always sought his own path and made his films disgusting, independent, and socially aware.  Robert Rodriguez is another.  Much like Kevin (Smith), he lit the way. He showed us all how to write a script around the things you have, probably the single greatest strategy any filmmaker can utilize wherever they are.  Peter Jackson & Sam Raimi both poured everything they had into creating their first films within the constraints of their resources like Robert Rodriguez. They also created innovative means to technically tell their stories.  Quentin Tarantino.  Even his lacking films have endless re-watch value because of his ability to craft wonderful, entertaining dialogue. I could endlessly watch almost any one of his films.  Stanley Kubrick had an unwavering perfectionism and incredible eye for composition.  Lastly, Cory McAbee, David Lynch, and Richard Elfman all taught me to be myself in my filmmaking and explore the weird and bizarre that lurks inside of me.

What are some of your favorite films?

Jeff Frumess: Night of the Living Dead, Female Trouble, Phantom of the Paradise, The American Astronaut, The Forbidden Zone, Kids, Gummo, The Cook, The Thief, His Wife, and Her Lover, Meet the Feebles, Kill Bill, From Dusk Till Dawn, Return of the Living Dead 1 & 3, Meet the Hollowheads, The Rocky Horror Picture Show…this list could go on forever.

I understand that A Faustian Tale was your first film, according to the IMDB.  What did making that film teach you about the process of filmmaking from a logistical standpoint?

Jeff Frumess: Well, I’d say it was the first “real” narrative one. I was in college and we were not allowed to get our hands on the Bolex (16mm) cameras yet.  So, we got together with a camcorder and shot this attempt at a silent, German Expressionistic film.  And I learned that if you really want to make a movie, you just have to get up, grab a camera and go make one! Don’t worry if it’s good or not. Just start shooting and learn from the mistakes you make! It was the same clichéd (yet true) lesson I had heard and would hear in the future from the likes of Robert Rodriguez and Kevin Smith.

Congratulations on winning the Best Screenplay Award at the Macabre Faire Film Fest in January for your latest film, Romeo’s Distress.  It tells the story of James and his infatuation with a woman named Jane, who may or may not be real.  What inspired this idea?

Jeff Frumess: Thank you! It was quite exhilarating to win at my first film festival, a validation of a lot of hard work. The story definitely comes from this fear of unrequited love and all of the baggage that comes with it.  Ultimately the main character, James, suffers in the delusion that he is some star-crossed lover who is deathly afraid to find nothing on the other side of the darkened sky – if that makes any sense.  Within the context of Romeo & Juliet it becomes even more interesting: What if Romeo loved Juliet, but Juliet never even knew he existed, much less loved him back?

Jeff Frumess: The very talented Liz Gruesome from Smokin’ Guns Tattoo down in North Carolina illustrated the poster. Poster art is so important and I think Liz really nailed it on the head.

I saw Liz’s work on her Instagram page.  Her work is absolutely incredible.  If I didn’t live so far away, I would be at her shop in a heartbeat!  How did you go about casting the film?

Jeff Frumess: I cast the film almost completely using Craigslist and Facebook. Anthony, who plays James, and myself go way back. We took Acting I, II, and III at Westchester Community College, only to lose contact for almost 10 years, until he saw my ad looking for James and responded in kind. It was his first time appearing in a film!  Dave Street’s part is partially based on the incredibly sage zaniness of Dave Street himself. He was the only one who could do the role. A lot of the actors sent in auditions via private Youtube links. Of all the Dales we got, Jeff Solomon was perfect for the part. He has such a charismatic energy when bringing Dale to life. The Grandma is actually my own Nana! I wrote the part with her in mind from the beginning. We shot all of her stuff in 10 minutes.  Charese and Stevie who played Sam and Seymour the flower shop guy also made their film debut. Stevie had never acted before! Jane was the hardest part to cast for obvious reasons. I learned a lot from that process.

You make effective use of the cemetery scenes.  Was this milieu always a consideration from the start?

Jeff Frumess: Cemeteries were always a part of the plan from the beginning as a way to frame the movie. We in shot five cemeteries overall.  One of them was fabricated in my parent’s back yard in a stylized way going back to the German Expressionist stuff, partially because I knew that I’d never be able to convincingly ape the real thing on my budget and there was no way I was going to be able to do stuff like that in a real cemetery in the middle of the night.  We also shot in the Old Dutch Cemetery up in Sleepy Hollow. Another cemetery on North Broadway in White Plains was used because it was near the street and easier to shoot certain exteriors at 2 A.M.

The black and white photography is very effective.  How did you accomplish this?

Jeff Frumess: It actually came about due to a perceived shortcoming: I really don’t know much about lighting for color. So while I am deeply in love with the aesthetic of black & white and the world it can transport me into, it was/is much easier to light scenes without having to worry and fiddle over color temperature.  It also made the scenes shot in color stand out more. It was a visual way to help tell the story of this sad guy who may or may not be living in a delusion. It also helped to cover up some of the budget-related seams.

Which film festivals has the film been in?

Jeff Frumess: So far we’ve made it into Macabre Faire Film Festival and now the New Jersey Horror Con & Film Festival (March 31 to April 2, 2017).  I am waiting to hear back from a few more. Either way, I am very happy to see Romeo play in fests like these.  I was very particular about submissions because I really don’t think this is the type of movie that would play well in a non-genre film fest. It needs to be seen by a niche audience that would appreciate it. And it certainly is not for everyone.

Where can audiences see the film next?

Jeff Frumess: You can catch Romeo on April 2nd, at 7:45 PM at the New Jersey Horror Con & Film Festival. It is playing in a double feature with “Theta States” by Manny & Lindsay Serrano which starts at 6:00 PM. Also screening that weekend is a cool-looking short called Impervia by Patrick Devaney.

What are you working on now?

Jeff Frumess: I have been tweaking this script called Hit/Run which is just as dark if not darker than Romeo. But who knows if it will come to life? I have a few other things cooking over the coals. We will see what happens. Whatever the case, I’m really itching to get out there and shoot something new! 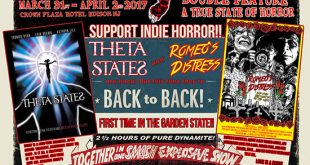 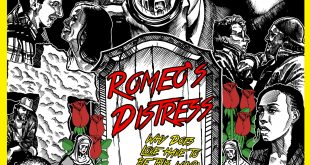 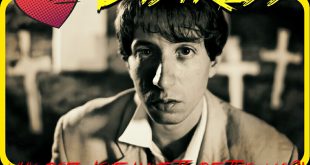