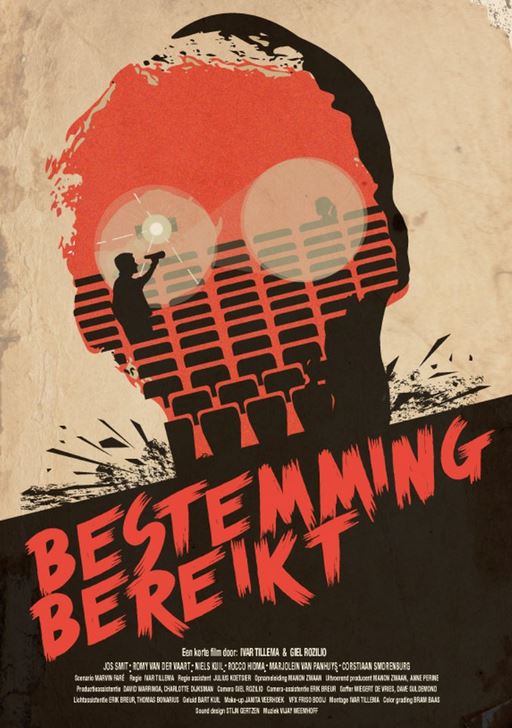 Tough police officer Johan van de Veer wakes up startled one night in his police car by the noise of two brats disrupting the official communication channel. When the prank turns into a serious cry for help, the connection is lost and the boys find themselves in need.

Johan tries to get in contact with the boys again, in vain. When (for some inexplicable reason) the cars navigation system shows the location of an old movie theater, Johan decides to take a look

By reaching his destination and entering the cinema, returning to his old familiar life will never be possible. Whilst the prank turns into a psychological game between life and death, for the first time in life his toughness into agony.

More short films, kiddies! Today we have a film from The Netherlands called DESTINATION REACHED (Bestemming bereikt), written by Marvin Faré and directed by Ivar Tillema. This is the only professional credit listed for both.

Our story opens on a police officer named  Johan van der Veer (played by Jos Smit, an actor with a really long list of credits). Johan is hanging out in his car, having a snooze on the night shift, when he hears some kids on his police radio. Apparently they have somehow tapped into the police frequency and he comes on the radio to tell them to knock it off.

What should have been a simple matter turns complicated when Johan hears screams for help on the radio before the line goes dead. He hears one of the boys say something about the screening room.

That’s when Johan’s GPS system comes to life and starts to give him directions to somewhere. Johan tries to switch it off, but it seems to have a mind of its own. Johan decides to follow the directions and they lead him to an old movie theater.

Johan isn’t sure if he is the victim of a prank or there is something else going on. As he investigates the old theater, he starts to realize the truth.

This is a really neat film. It’s visually compelling and the journey to the end, even if you see it coming, is worth the trip. I did pretty much see the end coming, but that didn’t change my enjoyment of the film.

So using my special short scale of one to five, five being awesome, I’m giving this film 3 flashlights.