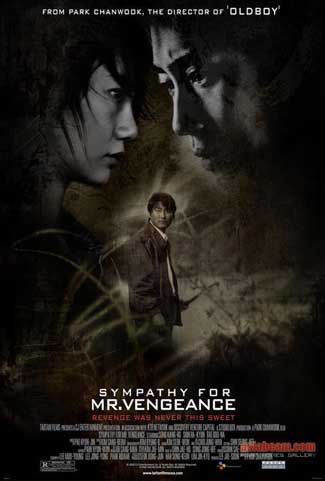 Deaf and dumb Ryu (Ha-Kyun Shin) is romantically involved with young revolutionary Young-Mi (Dun-na Bae) and loves his older sister so much that he sells his kidney on the black market to afford her a life-saving transplant. When Ryu find’s he’s been ripped off, Young-Mi hatches a better plan: She and Ryu will “borrow” the young daughter of the capitalist boss who fired Ryu and raise the necessary funds that way. Chan-wook Park directs.

I’ll just start this by being honest and telling you right off the bat that in my opinion SYMPATHY FOR MR. VENGEANCE is not as totally awesome as OLDBOY. It is a really good film and director Chan – wook Park made it before OLDBOY so perhaps his power as a film maker was building up and when he got to OLDBOY it was the right time and everything fell into place. Maybe not, and with all that said SYMPATHY FOR MR. VENGEANCE is a strong and raw piece of celluloid, and with a title like this it almost demands you to find out more about it.
And maybe you did or did not know that this is the first film in Chan – wook Parks vengeance trilogy which I found to be exciting and cool that this film maker thought enough of the violent revenge genre to do not one, not two, but three films in a row about the subject! And not direct sequels but three separate films dealing with the different themes, feelings, and consequences of revenge.

A ambitious undertaking and as of this writing I have yet to view LADY VENGEANCE but what Chan – wook Park is trying to achieve is working on me so far with SYMPATHY FOR MR. VENGEANCE and OLDBOY.

I read other reviews for SYMPATHY.. and much like OLDBOY many reviewers described it as a very violent and bloody, almost gory film, but I am here to tell you that it is not the blood soaked orgy of violence and destruction that some have painted it out to be. Yes it does have some brutal stuff in it and the violence is hard hitting and there is blood but it is not a action movie or a gory horror film. I think that the heavy and serious subject matter coupled with Chan – wook Parks powerful no nonsense style of direction that when the violence hits the screen it is quite naked and sobering. Plus we gotta hand it to the people that did a great job on the special efx and made them look so real and painful!

I am a movie fan that is of the opinion that knowing too much about a movie can dampen the intended effect or completely ruin it. But actually SYMPATHY FOR MR. VENGEANCE is one of the few films where it actually helps to know what you are getting into. I don’t see it as a movie loaded with twists and turns leading towards a surprise ending. It just begins and unfolds one event after another until the final reel and it is what it is. I see it as Ryus story who is a deaf mute who has a hard life but has his girlfriend Yeong -mi and a loving sister as his family who love and support him.

But his sister is in need of a kidney transplant and while Ryu wants to give her his but he is the wrong blood type so he is saving up all his money from his foundry job to pay for the operation. While pissing in a urinal he sees a add for a black market organ dealer and goes to them. They tell him that in exchange for ten thousand dollars and one of his kidneys they will get a kidney for his sister. He agrees but gets ripped off and is left naked in an abandoned building minus one of his kidneys and his entire savings. Then to make things even worse he gets notified by his sisters doctor that they found a donor for his sister and that the operation will cost ten thousand dollars. Life really knows how to stick it in twist it and break it off sometimes, don’t it?

So his gal Yeong – mi is the one to bring up the kidnapping scheme to get the money to pay for the operation. It’s out of desperation because he really has no options at this point but he cares for his ailing sister so much who does not want to be a burden on her deaf brother. He doesn’t want to do it but his girlfriend is the dominant force in their relationship and is very insistent and convinces him to do it. She tells him they should go after his ex bosses daughter because he laid Ryu off. The inevitable happens and they kidnap his ex bosses little daughter, Yusun.

His gal rationalizes it by telling Ryu that his ex boss, Dong – jin Park has so much money that he can certainly spare it and that of course they will not harm Yusun in any way and that they will play with her so much that she will not want to leave and that when she is reunited with her father it will make the familial bound that much stronger. And actually what she says comes partly true. After the abduction little Yusun is shown dancing and playing with her kidnappers and having fun and not upset at all. She dances with Yeong – Mi and watches cartoons with Ryu and plays with his sister. It goes to plan for a little bit until Ryus sister discovers that Yusun was kidnapped. I won’t reveal too much more but I will say that after this revelation events spiral down into a tragic chain of events of violence, pain, and ultimately death. And violence is like a tornado. Once within the maelstrom tis nearly impossible to escape.

SYMPATHY FOR MR. VENGEANCE is a good movie but you must go into it knowing that it moves at a slow pace, lingering on scenes, which is a good thing in my opinion. Also there are parts that might be considered key scenes that are left out, such as the kidnapping itself and when Ryu gets fired. Just pay attention and if you are a avid filmgoer you can figure these things out.

It says to me that the director thinks his fans are intelligent enough to fill in the blanks on our own. Lastly SYMPATHY FOR MR. VENGEANCE clocks in at just a little under two hours and every actor within this time frame pulls out a good performance, including the little girl who plays Yusun. So if you loved OLDBOY I implore you to check out SYMPATHY FOR MR. VENGEANCE and SYMPATHY FOR LADY VENGEANCE a.k.a LADY VENGEANCE and all three films are a worthy addition to any film fanatics dvd collection. And I think Chan – wook Park is truly a visionary director who is going to make many more excellent films to come.