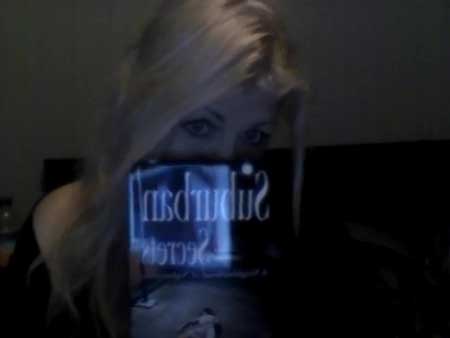 I’d like to take this opportunity to wish my very special guest at this time author extraordinaire Tina Piney. Tina, to date, at least by my count you have a total of eight short stories published from varying presses. But let’s start from the beginning. Your inaugural published tale Chuckles appeared in the anthology Splat from J. Ellington Press. Describe the brain child behind this grisly tale.

TINA PINEY: Well, a friend of mine and I decided to try to write together. Both, not together as in the same story but separate stories into the same competition in hopes of submission. And I had to think because I’m not a typical person. What’s scary to people? Then I thought clowns. People seem to be afraid of clowns for some reason. And I thought well what would make a clown scary? That’s when it came to me the idea of making balloon animals out of dead animal entrails. It kind of progressed from there.

DG: Morbid and grisly. I like it. I think there’s little room for debate that you’ve found your niche within the horror realm. Do a lot of people ask why horror and are there any other genres of writing you’re compelled by or aspire to contribute to?

TP: I’m kind of interested in everything really. Horror is something I’ve always appreciated. Although I read everything. I just get handed books upon books from my mother. They run the gambit. I just read something which is totally outside my experiences. Interesting. But for writing wise I’d say mostly horror but things I find scary might not fit under the genre at some point. I seem to dwell a lot upon dementia. I think is absolutely terrifying. But people may not necessarily attribute that along with horror.

DG: There’s nothing scarier than the horror from within because it’s something that’s completely vulnerable and beyond our control.

TP: Clowns don’t scare me. Now losing my mind. That scares me.

DG: Let’s talk about the conceptual process. First, where is an idea spawned from for a story and what provisions do you take to develop a story into completion?

TP: My ideas come from various places. A lot of anthologies they give you an idea or a theme. I work with the theme and go from there. It’s usually a completely different take than what most people have on it. That kind of makes me happy because people don’t see it coming. They vary. It all depends. Sometimes they just come from within me. A lot of times I work my experiences into things to make them more real for me. I don’t think a lot of people would understand which parts are me. That makes me happy.

DG: A conversational piece beyond the final paragraphs and sentences. I think that is what any author aspires to do. Drowning in Gore was recently released from J. Ellington Press. What is the predominant theme in this collection and describe the tale you have within.

TP: I haven’t read the collection yet as I’ve just gotten a copy. It was just released. When they showed me the picture of the cover it wasn’t anything near what they actually ran. It was a picture of a mermaid. And when I thought of the concept of drowning in gore I wondered to myself where that mermaid could have originated from. Where could that mermaid have come from? What could have brought that about? And that’s what took me back to ancient Egypt.

DG: Lycan Valley Press recently published its debut collection Morbid Metamorphosis: Terrifying Tales of Transformation. Your tale Death Vaccination has received tremendous reviews. Describe what it means to be a part of this anthology.

TP: This will be the first anthology that I was offered payment to be in. My goal for 2016 was to get into an anthology that someone would pay me for. It’s a nod to that not only am I worth publishing but worth being paid for. So that was a really big thing for me. Plus I really like the cover. And I really like some of the other authors in there.

DG: You’re among good company I’m sure. What’s the submission process like and what methods do you undertake to endure the waiting period? What’s the best advice you have to cope with rejection?

TP: I’m not that great with rejection actually. Luckily I haven’t gone through too much of it. I’m lucky I guess. I got rejected the other day but got two acceptances the day after. I had to put it into perspective. And I must admit I got a really nice rejection letter. They wanted me to keep submitting and everything. They were really nice about it. I thought where could I fit this story to see if it could see the light of day? I tried to think beyond that one submission and rejection.

DG: It’s like I often say, I’ve been rejected by some of the finest. No author is entirely exempt from emulating styles and prose to varying degrees. Who are some of the writers that influence your work?

TP: I think I take bits and pieces from everything. Of course Clive Barker will always be my favorite. I’ll read something and then I’ll think about the character that I’ve read and not necessarily anything that they’ve done or the story but a completely different aspect. If I’ve written a story that that person could have been really a new story evolves from that. So it’s inspired by but not exactly a copy of. It’s hard to explain. So I think about everything that I’ve written and the things that really stick with me they go in the bookcase and the things that don’t they get discarded.

DG: I think it’s next to impossible and I see this more and more in Hollywood where remakes seem to be the most common of releases and it’s next to impossible to have a completely original idea. Often great ideas spawn even greater ideas. It’s the same with inventions. You think of something that has already been invented and someone else comes up with a way to even improve upon it. That’s the way I like to think about it.

TP: Exactly I like the way you put it. Do you write or something?

DG: I give it a go now and again. With autumn hitting us with a vengeance, Halloween is rapidly approaching which I know is a decorated and celebrated time of year within your household. What plans do you have for this year?

TP: Today actually I just made up my candy bags for the annual family Halloween dinner that I have for my children, my husband, my parents, my brother and his children and wife. I’ve picked out the dessert. I’ve contacted the school to see what I can bring. Likely donuts. Vampire donuts.

DG: Vampire donuts. I think that’s something we need to elaborate on.

TP: Yes! Well you take a donut, you know the open hole and shove vampire teeth and you take red icing and run it down like blood. And then you take the red icing and put blood red eyes on it. And today we’ve just planned our costume. We’re going with a Day of the Dead theme.

DG: What is the best piece of single advice you can offer to aspiring writers?

DG: What’s on the horizon for Tina Piney and what can readers eagerly anticipate?

TP: I’m pretty bad at this. But I will say by the end of the year there should be at least another dozen or so books out. I can’t go into specifics but there is some exciting things coming out around Halloween. Look for that.

DG: I thank you for your time, your insight and enlightenment Tina. It’s been a real scream.

For information on Tina Piney releases