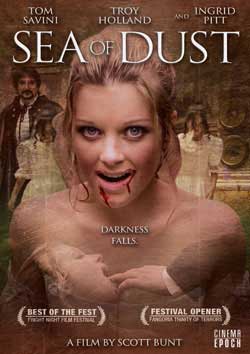 Gore and period costumes are splattered across the screen in this cheeky nod to classic Hammer horror films starring genre stalwart Tom Savini (Dawn of the Dead) as the vicious and pitiless Prester John. The creepy action begins when Stefan (Troy Holland), a medical student, is sent to the remote village of Heidelberg to investigate a mysterious epidemic that’s causing people’s heads to explode without warning.

Historically tales of villains in the form of demons plague religious thought and practice as people of good faith try to live a life without sin so that they will one day be rewarded for the good deeds. Unfortunately, bad overcomes evil in most cases, which questions our own beliefs and makes us reevaluate our purpose in keeping our faith in a higher power. In Scott Bunt’s “Sea of Dust,” a young medical student must with an evil spirit that is overtaking a German village causing them to turn against each other, and self destruct in an explosive fashion.

Stefan Cristoph(Troy Holland) begins his tale making his ritualistic stop at the love of his life’s home to once of again ask for her hand in marriage. When Stefan makes it to his love Elizabeth’s(Sarah Dauber) home, he is unwelcomingly scolded by the butler, Chalmers(Pete Barker). Chalmers tells him to leave on Lord Dunsten’s(John Correll) orders, but Anna(Ingrid Pitt) intervenes welcoming him to speak to Elizabeth. When Elizabeth still refuses Stefan’s hand in marriage, Stefan confronts her father, and his instant decline is mysterious to Stefan’s intentions.

As he leaves Dunsten residence he comes upon a body laying on the ground face first, she turns over as Stefan examines her and tells her she needs to go to Dr. Maitland’s to have her examined. Woman, Carla(Darby Lynn Totten), is dazed as she keeps repeating a chant about a certain “Prester John.” Stefan arrives at Dr. Maitland’s, and immediately the doctor is disgruntled that the medical student Stefan was sent instead of his teacher, Professor Sorell(Bill Timoney). The doctor then shows Stefan a corpse found in the village, in which the head is missing, in which the doctor declares that head had exploded after finding other bodies of the same nature. The doctor then tells Stefan that the headless body is the victim of the diabolic overtaking by Prester John, a malicious spirit made up from of dead bodies from the “sea of dust.”

When Stefan is attacked by Carla in the middle of the night, he knows that these mysterious happenings are beyond his own medical knowledge, and leaves with Dr. Maitland to go back for Professor Sorell. They keep Carla tied up, and attempt to take her back to her father. On their venture back, Stefan is transported to Prester John’s(Tom Savini) magical kingdom where they meet and he learns of Prester’s tale and his intentions to overtake the whole village with his own ideals. Stefan is transported back to reality, and know mentally overtaken by Prester John’s hypnotic state. Being under Prester’s spell, he must rise against the malicious Prester while trying to save the fate of all the villagers with the help of Professor Sorell.

“Sea of Dust” is filled with plenty of blood and gore, as heads explode in their last stage of being under the compromising spell of Prester. Prester John is played by horror legend Tom Savini, and his eerie costume is accentuated with blackout contacts as he bewitches the villagers with his murderous ideals. The historical costumes fit the time period in which the film was based, which is hinted at but never truly declared. There was one scene in which Stefan was underwater, which was cheesy in that he wasn’t even wet and floating amongst CGI generated aqua blue coloring and white circles.

Scott Bunt’s “Sea of Dust” is a gory tale of what happens when a demonic spirit overtakes a village, causing chaos and multitudes of merciless killing amongst a German village. This bloody story of questioning of personal faith versus real life destruction by a deadly warlock is full of surprises, and has a conclusion.