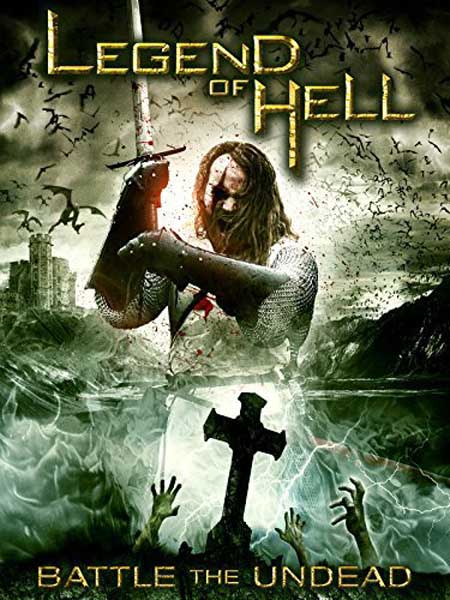 An archaeologist finds a relic that supposedly opens the gates of Hell, and is thrown backwards through time and space to fight to keep it closed.

Directed by Olaf Ittenbach, German goremeister extraordinaire, Legend of Hell takes a brief tour through history, giving him ample opportunity (and historical weaponry) to showcase his talents. And showcase he most certainly does. With a much bigger budget than usual, and some truly excellent cinematography, Legend of Hell is one of his better films. Unfortunately, for a man with as many talents as Ittenbach has, script writing is definitely not one of them, and it hurts this movie immensely.

An archaeologist finds an amulet and a scroll that will unlock the gates of Hell. She is murdered, which subsequently takes her to another dimension. Par for the course, right? She is pitched into battle with a group of fighters who seek to stop Satan’s army from entering their dimension, which is actually our dimension at an earlier time in history (like, one where he can use swords and pitchforks and stuff.) After fighting through random hordes of zombies/monsters, they finally reach the gates, where their efforts are to no avail. The gates of Hell open, our heroine is killed again, and then she’s resurrected and seemingly lifted into Heaven, greeted by others who have died before her. It really doesn’t make a whole lot of sense, to be honest, and the plot is practically nonexistent/nonsensical, but then again, you never go into an Ittenbach movie to experience excellent storytelling.

There are definitely some great gore effects, with the standard beheadings and head explosions, and Ittenbach even throws in some not-so-standard kills as well. Fortunately for the viewer, when you’ve made your name on vile, bloody depravity, you look for any excuse to add to your bag of tricks. Legend of Hell is a hidden gem for gorehounds, as there are lots of bloody dismemberments and creative kills. Unfortunately, it looked more like Dead Alive era Peter Jackson was directing a shitty, direct-to-video Lord of the Rings movie instead of a horror epic.

The plot rides on an arterial spray, serving only to take us to the next violent battle. There’s a lot more gunplay than is the norm for an Ittenbach film, but it also allowed him to explode many more heads than usual, so who’s complaining, I guess. There’s very little substance to the film, and the acting is almost as bad as the writing. There’s really not much effort put into most of the film, and the budget was clearly spent almost entirely on special effects. But, again, that can hardly be a complaint with a film that you would only ever watch to see exactly that. It’s just a shame that Ittenbach can’t pick up a few more skills for what happens in front of the camera, as his behind the camera work is really stellar in this film. There’s not much lacking from what we see on screen, and if that same amount of effort (and money) were put into making a decent, watchable film, this one could’ve really shined.

Ittenbach is one of the crown princes of gore. As with almost all of his other films, Legend of Hell is worth a watch to Ittenbach completionists and those looking for a bloody, mindless watch. Don’t go into this one expecting to be very entertained, however. There are a lot better options out there that won’t leave you wondering how any of the people on screen ever got work in Hollywood (or Germany? What’s the Hollywood of Germany? Munich? I bet it’s Munich.)

With my previous review of Secret Things, I discussed New French Extremism a little bit, and how they’re making amazing movies from out of nowhere (though, granted, they’ve been doing so for some years now.) Germany, on the other hand, is and has always been bringing us the latest and most disgusting of violence and gore. If we could get these two together, man, oh man… Unfortunately, as it stands, you’ll have to seek out France for the acting chops and Germany and Italy for the blood and guts. When the French discover these talented fx folks, we’re all in for a world of hurt. Fortunately, they’re well on their way.