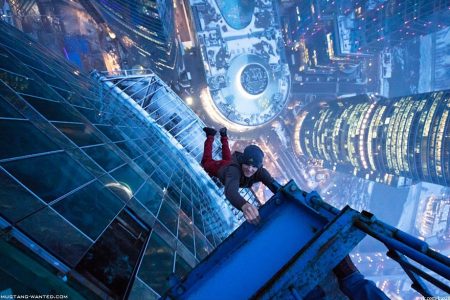 Ukrainian Mustang Wanted and Russian Oleg Cricket are world-renowned “Rooftoppers,” accomplished parkour stuntmen known for taking things beyond the next level—Ginzburg describes their talents as chiefly “as a lack of fear of heights.” In this video from CNN, Oleg leaps, almost casually, from pillar to pillar atop the 43-story Sofitel Hotel in Dubai bit.ly/OlegSofitel. While there, he hangs from the 40th floor with nothing below him but air. In this compilation video with almost 10 million views, audiences can see Mustang hanging from skyscrapers, “tightrope” walking on construction cranes and performing various other dizzying stunts. bit.ly/MustangFeats.

Vitaliy & Vadim’s approach differs from Mustang and Oleg both in that they work as a duo, and in that they are more concerned with going places no one else has been in a stylish and visually appealing manner than they are with the physicality of their exploits. The pair have made headlines by breaking into buildings and construction sites and scaling the towers. This video of the pair climbing the Shanghai Tower—the second-tallest building in the world—has almost 57 million views.

“These men are incredible athletes,” says Ginzburg. “They have more strength in their fingers than most people have in their entire bodies.” Always looking to take their exploits to the next level, Ginzburg assures that audiences will not be disappointed.

The potential for cinematic impact for a film like We Kill Death is obvious, Ginzburg explains. “People report intense physical and emotional reactions just from watching these stunts on phones and computers. We believe that this film will deliver the single most visceral big-screen cinematic experience unlike any other.”

The producers have tapped Emmy nominee Eddie Perez as stunt coordinator.  Perez, a veteran stuntman and stunt coordinator, has worked on such films as Fast 8, Deadpool, Jack Reacher, and Captain America: The Winter Soldier.

Inga Vainshtein Smith says, “After producing Hardcore Henry—which had some seriously crazy death defying stunt work, where people still call and ask, ‘How did your director do that?’ I welcomed the opportunity to go even further out on the ledge to join Alex and Tony in bringing this film to the screen.”

Mustang Wanted, Oleg Cricket and Vitaliy & Vadim will all be in Toronto. At the Festival, the filmmakers will execute a live aerial stunt unlike any other in the history of the Festival on Friday evening, September 9 at 6:00PM EDT. Guaranteed to take your breath away, the event—which includes a reception from 5:00-7:00PM for special guests and media to witness it live—is not to be missed. WME is on board to handle domestic sales of We Kill Death.