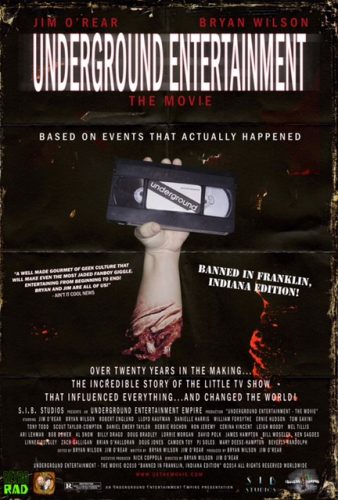 In 1990, long before the geek popularity of “The Big Bang Theory,” a television series was born that was unlike anything the world had yet seen. Created by Jim O’Rear and co-produced by Bryan Wilson, UNDERGROUND ENTERTAINMENT captured the planet in its grip weekly, introducing humankind to new fandom pleasures, experiences, and freedoms; while at the same time shaking up and defying censorship laws at every turn.

Now, twenty-plus years after its television debut, UNDERGROUND ENTERTAINMENT returns with an all-star cast as a hilarious, irreverent feature-length MOCK-umentary that chronicles the creation and eventual demise of an award-winning, ground-breaking icon in television entertainment.

UNDERGROUND ENTERTAINMENT: THE MOVIE is the incredible true story of the little television show that influenced everything and changed the world.

“A well-made gourmet of geek culture that will make even the most jaded fanboy giggle. Entertaining from beginning to end! Bryan and Jim are all of us!

“The funniest movie of its kind since THIS IS SPINAL TAP, except this is real!”