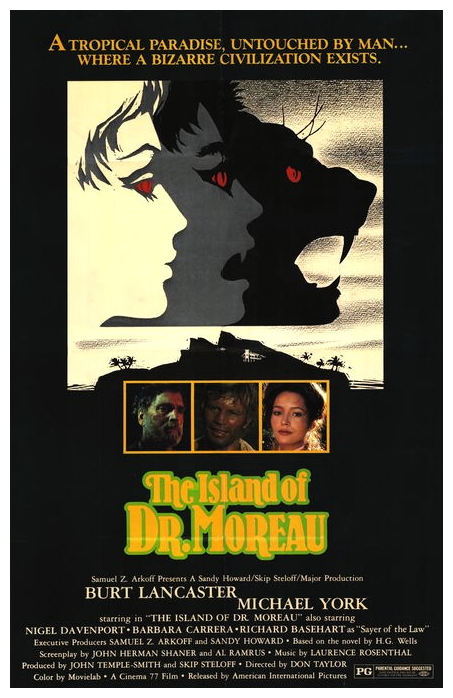 “Shipwrecked Andrew Braddock washes ashore on a remote, tropical island in the Pacific. There he is attended to by the seemingly kindly Doctor Moreau and his dour assistant Montgomery. Also living in Moreau’s stockaded fort is the beautiful and exotic Maria, to whom Braddock is immediately attracted. The island’s natives appear very strange to Braddock, who questions both Moreau and Montgomery on their unusual appearances and behaviour. Not satisfied with their explanations, Braddock discovers that these monstrosities are actually wild predator animals that have been imported to the island and, as a result of genetic manipulation and surgery, have taken on human characteristics, including rudimentary speech. Lion-men, hyena-men, bear-men, and other mutant monsters are kept in check by their fear of Moreau’s whip and surgical laboratory, The House of Pain. Disgusted by these unnatural experiments and cruelty, Braddock attempts to stop Moreau’s work, with tragic consequences.” (courtesy IMDB)

After being well-treated by filmmakers in the thirties and relatively well-treated in the fifties, my old friend H.G. Wells finally got the Z-grade film treatment in the seventies with the production of Food Of The Gods (1976) and Empire Of The Ants (1977) based on ‘portions’ of his original stories. Producer, writer and director was Bert I. Gordon (aka Mister B.I.G.) who did so much for (‘to’?) the genre back in the fifties. He earned this nickname because his films reveal an obsession with height. In many of his movies people are menaced by mega-fauna or humongous humans. Bert gave an ungrateful world films such as The Cyclops (1956) and The Amazing Colossal Man (1957). The admirers of H.G.’s novels have yet to forgive Bert for twice-murdering the same book. First as Village Of The Giants (1965), and then again under its original title as the aforementioned Food Of The Gods. Although it’s far from being H.G.’s best work, it certainly didn’t deserve that fate! 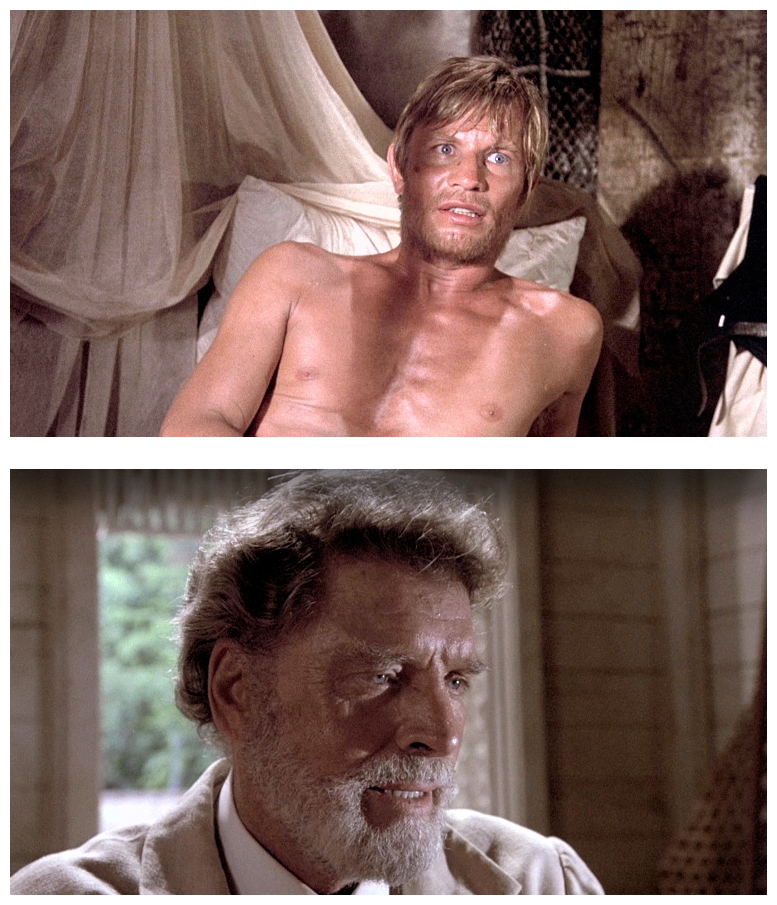 The screws continued to be tightened on the ghost of H.G. with the release of The Island Of Dr Moreau (1977), which had been previously filmed as Island Of Lost Souls (1932) and The Twilight People (1972). According to the press sheet that accompanied the movie: “American International Pictures made it perfectly clear that they are not remaking that film but have decided to play The Island Of Dr Moreau in 1911, immediately providing limitless opportunities to approach the film not as fantasy nor as science fiction, but as if the filmmakers believe that every bit of hat happens on the Doctor’s island can happen. This thinking called for a different approach, namely science fact.” No doubt it will come as a surprise to many science fiction writers and filmmakers that it’s only their personal conviction which separates their work from being either fiction or fact. 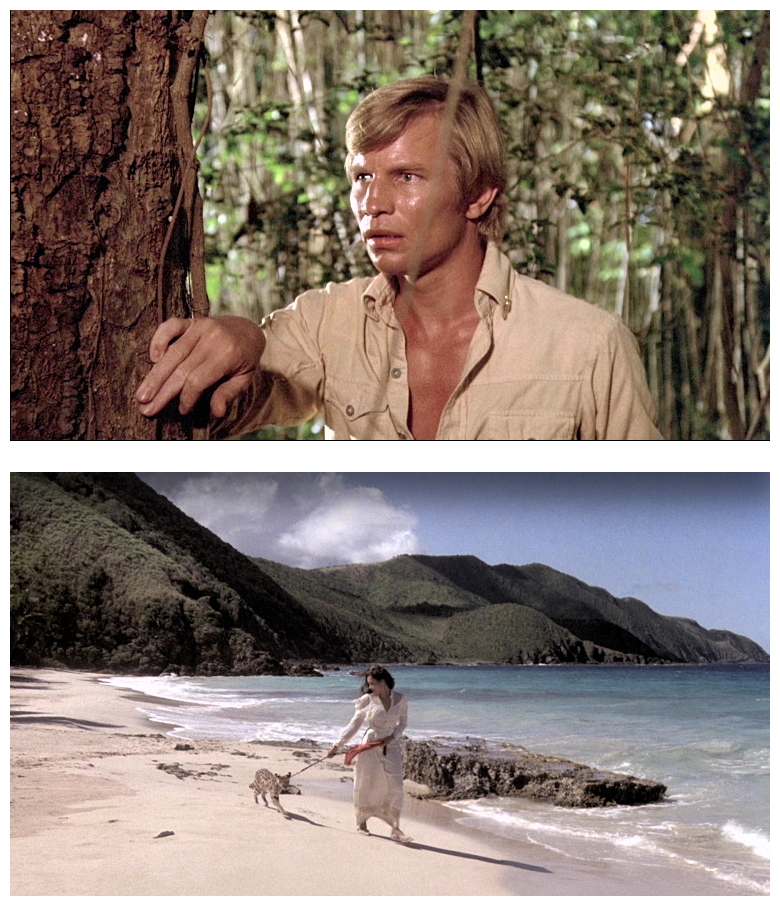 Island Of Lost Souls is far superior to this dull travesty directed by Don Taylor – whose only previous science fiction film was Escape From The Planet Of The Apes (1971) – and scripted by John Herman Shaner and Al Ramrus. Island Of Lost Souls wasn’t entirely faithful to the novel but at least it had style and atmosphere and moved at a fast pace. More importantly, it retained H.G.’s original idea of Moreau achieving his humanoid-animal creations by means of vivisection and the literal grafting of flesh and bone onto his tortured subjects. Thus the description of his laboratory as the dreaded House Of Pain had a powerful relevance, and the beast-men understandably regarded him with a mixture of terrible fear and awe. 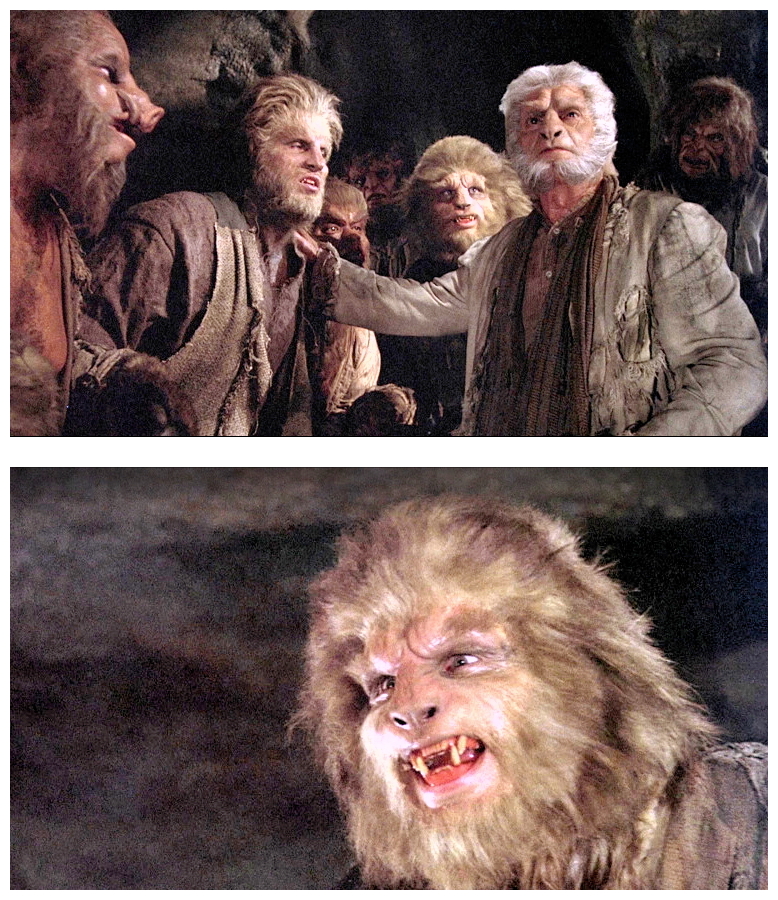 But, in the 1977 film, the writers updated the doctor’s methods and made him a genetic engineer (in 1911!) who creates his ‘humanimals’ by means of injecting his subjects with chromosomes, thus the references to the House Of Pain lose all meaning and Moreau himself is diminished as a symbol of god-like power and cruelty. He can also change humans into animals (rather implausibly in the case of the clean-cut Michael York). As Moreau, Burt Lancaster doesn’t try to repeat Charles Laughton‘s wildly over-the-top performance but instead portrays him in a quietly underscored way and, with a better script, he might have succeeded in creating a memorable character. Michael York as young Andrew Braddock shipwrecked on Moreau’s island is his usual blandly sincere self, and Barbara Carrera is suitably decorative as the vaguely feline Maria. 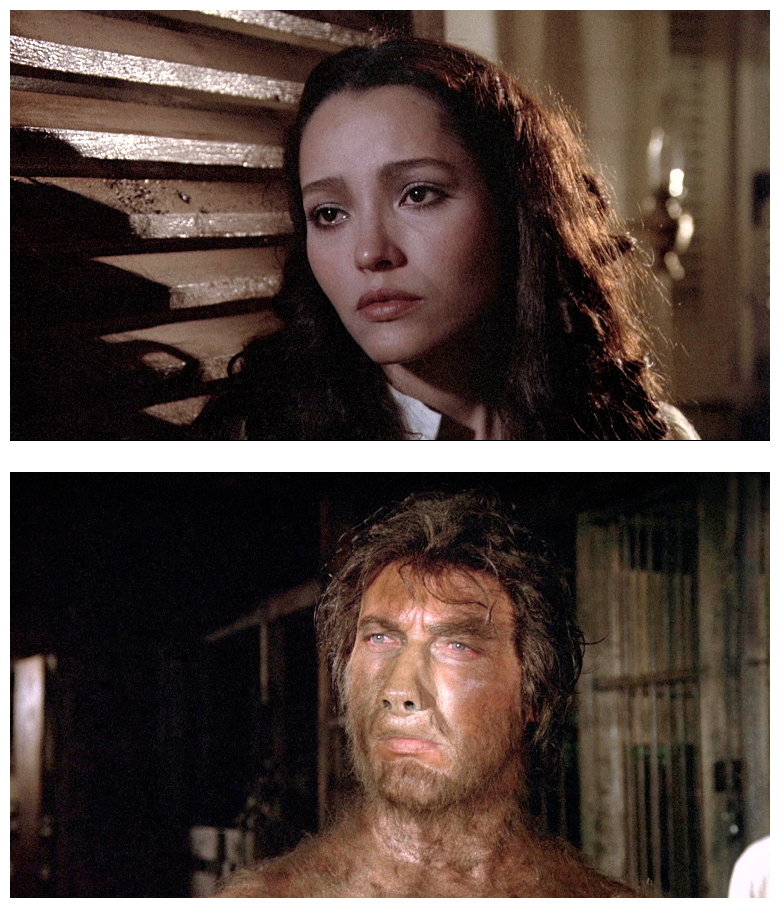 In fact this was the second of two back-to-back science fiction films for Carrera, who had appeared in the previous year’s Embryo (1976) – both pictures were produced by Sandy Howard and included three of the same makeup crew. Talented actors Nigel Davenport (as boat captain Montgomery) and Richard Basehart (as Sayer Of The Law) are sadly wasted, and the humanimal makeups by John Chambers – of Planet Of The Apes (1968) fame – are rather stiff and rubbery-looking. This was rather fortunate for actor Bob Ozman as the bull-man who, while filming a scene fighting a real tiger, would have had his head bitten off if it wasn’t for the tough fibreglass mask he was wearing. It’s with this image in mind I’ll bid you a fair fondue…frail frond? Frontal fondle? A fond farewell until we meet here again in seven days so I may bewilder you with another amazing oddity on the best website with the worst films ever: Horror News! Toodles! 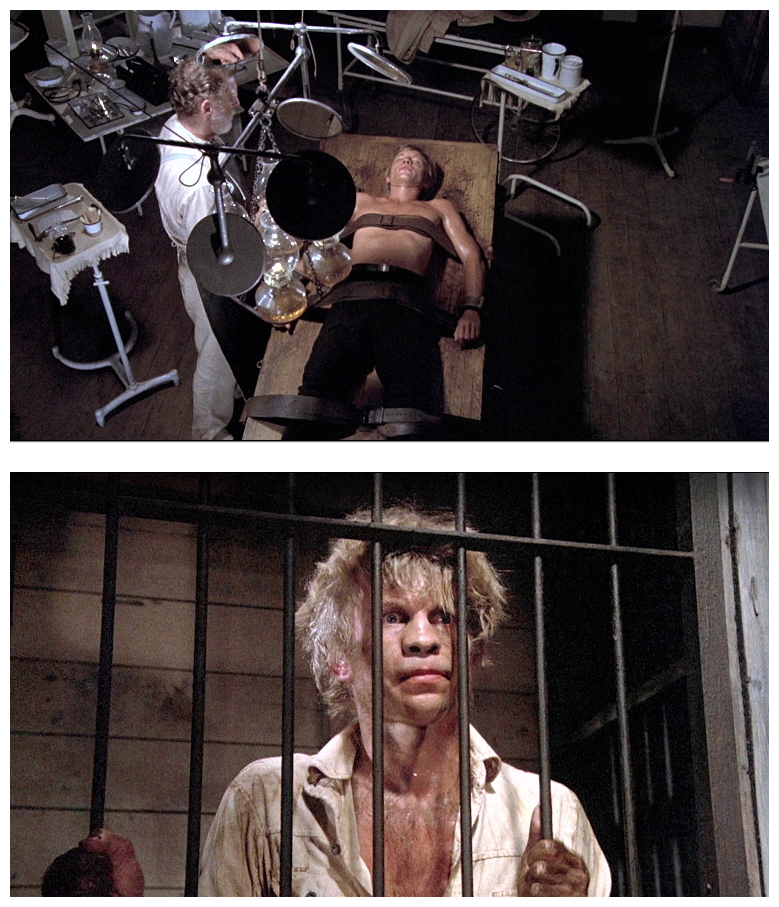