COSMIC CONVERSATIONS: DIALOGUES ON THE NATURE OF THE UNIVERSE AND THE SEARCH FOR REALITY 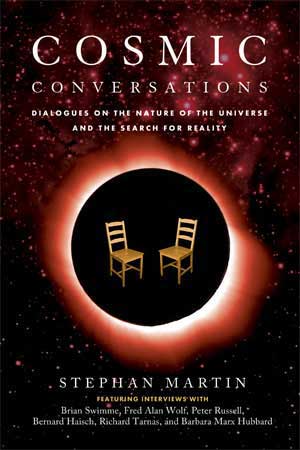 There’s nothing better than a book that makes you think. Too much today is about entertainment and still there is so much more to be discovered that books like this help move us in little steps towards ultimate understandings. Stephen Martin realizes that fact as well, so he has approached a collection of imaginative, educated and highly respect thinkers to in short for lack of better terms bring us closer to god. No not a religious book, but what is religion in its essence?

Cosmic Conversations is an attempt to analyze, question and pry open the gates into understanding of the universe if even for a split second of revelation. As the question are asked they do what they intend, which is open up more questions. In Martins’ interview with Swimme we learn that part of our frustration comes from lack of understanding on how to express these things that the English language cant encompass. We learn that other cultures approached things slightly different and yet have certain understanding that we don’t because of it. As a noun based society this limits a certain percentage of our way of thinking.

Further reads dig into the theory that the simple fact of existence is a marvel in itself considering all the odds that could arise in the process of becoming. As it’s indicated …all we are is just stardust, might be a big notion to grab hold of, though what these philosophers explain is the grand picture being much more than our perception of it.

A simple fact points to the notion that we all have originated from the same matter. If you go far back enough, the same origin in our lineage is something that gets a perspective in itself. A connection is hinted at the the use of evolution to define who we really are and the direction we are approaching. Strangely enough in this book and several others I have read as of late, it suggests that we are really at an important time in the evolution of history. More so than ages past and generations past. This in itself paints the single though of “what’s to come” now that we are here?

A book such as Cosmic Conversations may be too far reaching for some to grasp in introduction, although the wisdom is in fact essential to our own understanding. As I read forward, I had reflect on the idea that what is said may be the beginning to enlightenment. Also perhaps the current education system needs to expand its teachings to encompass a evolved level of thought.

There are tough discussions abound in this collection. What I really liked in this case was the question and answer approach. By gathering everything into this format it helps to clarify or simplify the thoughts presented. Often I have read similar books that get too wordy into translation. The simpler approach is much easier to digest.

One of the tough discussions often revisits the idea of science to metaphysical. As we grow more into the quantum theories, science is finding that metaphysical theories almost write themselves into the explanations. This is perhaps a first time in our current history where we’ve had to look into the beyond to clarify meaning of scientific discovery.

Even such things as the string theory (multidimensional) can’t be discussed without opening doors for other unexplainable events. As you read on, you get that general feeling that these are the times of change. That change may be our view of the universe and acceptance that we “are” the universe. If this is true then a progression of thought is inevitable. Now to be on the fair side author Stephen Martin conducts interview with a whole range of intellects and theorists. Some hold deeper relationships with spiritual takes on the subject while others come from a pure science standpoint. In all, it’s entirely fascinating from “all” the standpoints. While reading, it’s easy to get washed away in the complexity of what our universe is made of and what role we play in it. While I didn’t really think anyone has the ultimate authority it is definitely interesting to see that out ways of things are evolving in the same fashion as our place in the grand scheme.

Readers will find this book highly engaging for a number of reasons. There are areas that may instantly shoot overhead but anyone who has done any kind of reading of the material whateversoever will really embrace the complex mind and its purveyors of true knowledge in the beyond!