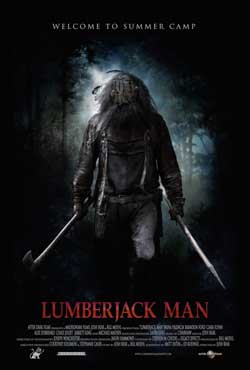 As the staff of Good Friends Church Camp prepares for a spring break filled with “Fun Under the Son”, a demon logger rises from his sap boiler to wreak his vengeance and feast on flapjacks soaked in the blood of his victims. (Source: IMDB)

Lumberjack Man, one of After Dark’s “8 Films to Die For” 2015, is a comedy/horror that has its tongue firmly placed in its cheek from the get-go and doesn’t let up until the credits end. Full of boobs, gags and gore, Lumberjack Man pokes fun at 80s titty films and slashers alike with hit and miss accuracy.

I love me a good comedy/horror. It’s my favourite sub-genre of the twisted and vile kaleidoscope that is horror, so when I was assigned Lumberjack Man I was excited. It ticked a number of boxes for me. It had comedy, it was a slasher, it had amusing kills, it had plenty of boobs and it had an almost unstoppable killer with an amusing weakness. What else could you ask for other than an entertaining storyline? Well, pretty much an entertaining storyline…

Though it was fun, the storyline for Lumberjack Man was too thin and was just barely strung together to become a film. This is typical to the genre, and it’s a shame because when done right (like Tucker and Dale vs Evil) you have a special experience on your hands. Unfortunately Lumberjack Man opted for the non-stop gags and shenanigans route to entertain you, and though it succeeded in doing so to a certain degree, the repetition of the jokes and the weak story really ran out of steam and just barely panted over the finish line. The lore surrounding Lumberjack Man was surprisingly well thought out and solid though and it’s a shame that the supporting story of the camp and our campers was as thin as a wet paper towel. And clocking in at 105 minutes the weak story really glares out at you as the film struggles to make it to the end. It really needed to be about 25 minutes shorter as a lot of scenes (and characters) were extraneous and not that funny. If this was shortened, Lumberjack Man would have been a hell of a lot punchier and better for it.

The Jesus camp setup was an amusing choice and it allowed the writers to milk a number of gags which, for the most part, worked a treat though they also relied on you to throw common sense out the window and just accept the fact that a Christian camp is full of dope heads, sluts and gay guys. 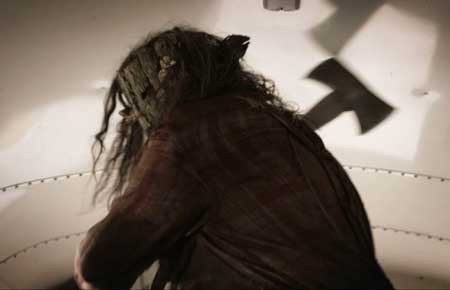 Character wise, the story was spread too thin over a few of them, so a clear protagonist was never truly defined, leaving me feel a little aloof. This hampered the story because a journey was not created for any one character. Nobody learns anything, becomes a better person, or anything somewhat arc-like. If more time was spent on our eventual protagonist, Faith (Ciarra Flynn), then the story would have been stronger. The writers did try and throw in a link between Faith and Lumberjack Man, but it was weak and used almost off-handedly, feeling really forced and ultimately non-consequential. The climax also felt rushed and was pretty weak and disappointing. Considering the outlandish nature of what had come before and the creativity used thus far, it was a shame that it ended as low-key as it did.

The Lumberjack Man himself was well crafted. Hulking and large, he was the typical silent killer with a very interesting mask made from tree- bark (looks way cooler than it sounds) and some red lighting at the eye holes to give the killer’s eyes an even more oppressive glare. He was scary looking and I know I’d drop a deuce in my panties if I crossed paths with him!

Cinematography was pretty darn good. It was a professional effort and nothing felt low budget or amateur. With a solid soundtrack, effects and quality acting from all the actors involved, Lumberjack Man was a surprisingly solid effort in this regard.

Would I watch this again? It was a funny film with some amusingly gory kills, but the weak story doesn’t warrant a repeat viewing from me. It’s a shame as everything else was solid, from the acting, effects, cinematography, the lore surrounding Lumberjack Man and the Lumberjack Man himself. 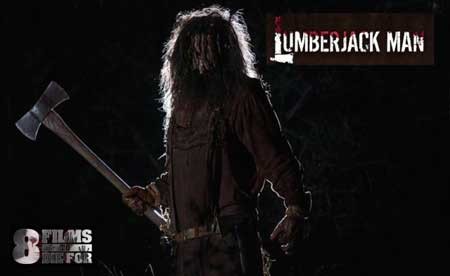 Should you watch this? If you like comedy/horrors, sure, give it a crack. It’s not the best of its ilk, but it’s hardly the worst either and you will find yourself grinning from time to time at the silliness that never ceases.