TEN DIRECTORS FROM AROUND THE WORLD.

ONE NIGHT OF HORROR. 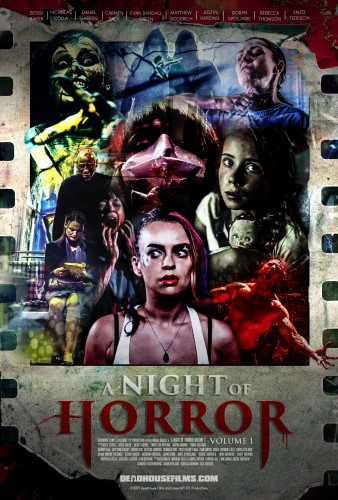 Ten directors will come together for one night of horror with the first annual ‘A Night of Horror Volume 1’ anthology premiering on opening night of the A Night of Horror International Film Festival from Thursday November 26 – Sunday December 6.

Produced by A Night of Horror International Film Festival’s Director Dr Dean Bertram and Deadhouse Films’ Enzo Tedeschi, the ‘A Night of Horror Volume 1’ anthology trailer youtu.be/LiAvi3dc12Y and poster have been released today.

Consisting of nine short films submitted to and invited into the anthology for the first time this year the ‘A Night of Horror Volume 1’ anthology brings together genre filmmakers from across Australia and the world and is a 90 minute pulse-charging horror featuring zombies, demonic entities, self-surgery, cannibalism and much more.

Featuring Bianca Bradey of Wyrmwood and Starting From Now fame, Ryde resident Enzo Tedeschi’s Life Imitates is the tale of a young woman that wakes up in a macabre art gallery, her experience leading audiences through the short films that make up the anthology.

From the screenwriter of The Pack, Dark Origins from Brisbane’s Evan Randall Green tells of a psychologist that discovers the terrifying trauma haunting her young patient may in fact lurk beyond the girl’s fractured mind.

California’s Los Angeles based Bossi Baker’s Hum takes us inside a woman’s apartment where a mysterious humming does way more than keep her awake at night.

Escape for a weekend away with Melbourne duo Nicholas Colla and Daniel Daperis’ Flash and risk being invaded by a dark presence.

Ravenous from London’s Southgate’s Carmen Falk leaves us alone with a young girl and her grandmother who has a compulsive urge to eat raw animal flesh.

Canada’s Ontario based Justin Harding’s Point of View sees a tired coroner stalked by the living dead…but only when she isn’t looking.

Take the train ride from hell with an unfaithful woman in Melbourne’s Ivanhoe based Goran Spoljaric’s The Priest.

I Am Undone from Rebecca Thomson of West Hobart, Tasmania sees a cosmetic surgeon suffer spectacularly from oversampling her products.

“We have managed to curate an incredibly high-level of production value segments for this first instalment of the ‘A Night of Horror Volume 1’ anthology.  I am super-impressed with the quality, but also the variety on display, ranging from the hilariously macabre to the seriously dark and unsettling – all the ingredients for a good 90 minutes of chills and entertainment.  I reckon horror fans familiar with recent anthologies will find this one a breath of fresh air” said Deadhouse Films’ Enzo Tedeschi.

Tickets for A Night of Horror International Film Festival are on sale and can be purchased at www.dendy.com.au/Promotion/A-night-Of-Horror-Fantastic-Planet-Film-Festivals-2015

Now in its 9th year, A Night of Horror International Film Festival runs at Dendy Cinema Newtown in conjunction with Fantastic Planet, Sydney Sci-Fi and Fantasy Film Festival.  Together the two festivals provide Australia’s leading showcase of genre specific cinema screening over 100 of the latest and greatest horror, sci-fi, fantasy, thriller and cult films most of which are world or domestic premieres.

This year’s joint program is overflowing with an incredible range of the best and latest films of the fantastic genres.  From the nerve-shattering intensity of ‘Landmine Goes Click’, through to the sexy and gory lesbian road movie ‘Mania’, to the critically acclaimed vigilante genre-bender ‘The Demolisher’ and the supernatural chills of ‘The Shelter’; those whose taste runs to the dark and bloody side of cinema will find their appetites gloriously satiated with these films and many more cinematic gems.  And sci-fi fans will revel in the time-travelling twists of ‘Counter Clockwise’, be enthralled by the darkly erotic dystopia of ‘Cord’, and find themselves immersed in the post-apocalyptic drama of ‘Astraea’.

‘Gitaskog’ travels with five friends to a lake haunted by an ancient monster; ‘Pig Pen’ takes the audience along a harrowing path of desperation and violence; ‘Normal’ follows the dark kinks of a beautiful young woman to an apocalyptic and unforgettable finale; while the high-octane Australian revenge thriller ‘Blood Hunt’ will have audiences’ pulses racing.  And zombie lovers will be salivating for the festival’s closing night film: the Sydney premiere of western/zombie mash-up ‘Bullets for the Dead’.

The full program for A Night of Horror International Film Festival is available at www.anightofhorror.com